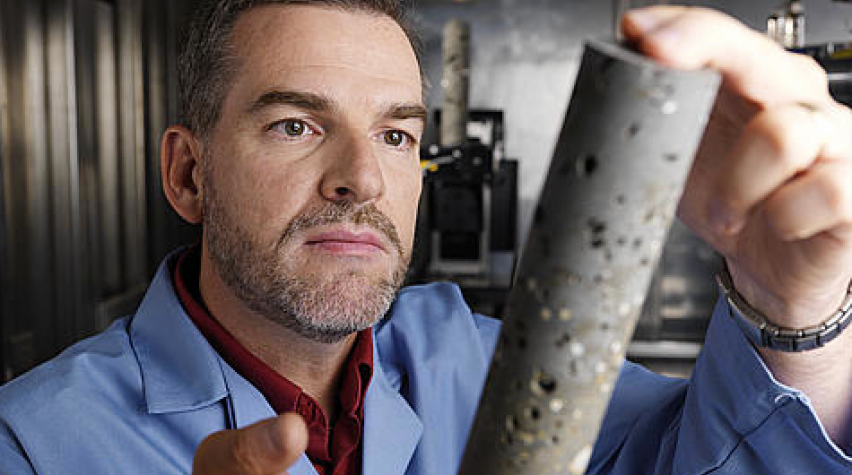 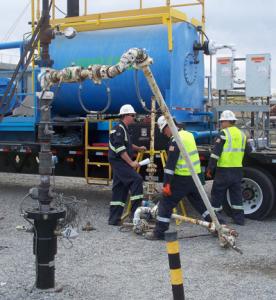 Carbon sequestration has been painfully slow to take off, but one of the first experiments is finally under way in southeastern Washington. Carbon dioxide is being injected into underground basalt formations, which are part of ancient lava flows beneath much of Washington, Idaho, and Oregon. This targeted rock contains pores created when magma flowed across what is now the Columbia River Basin. As the magma cooled, bubbles of CO2 formed holes sandwiched between solid rock. On July 17, researchers at the US DOE's Pacific Northwest National Laboratory (PNNL) began the injections. 1,000 tons of CO2, delivered from several West Coast oil refineries, has been sent half a mile down into into lava flows stacked like pancakes, all formed as ancient volcanic lava flowed and cooled, one on top of the other. (press release)

By sending emissions back underground, "We're returning the carbon dioxide from whence it came," Pete McGrail, the PNNL scientist heading the experiment, told the journal Nature. The pumping will continue for two weeks. Then the well willbe capped and monitored for more than a year to make sure there's no leakage, as scientists extract fluid samples and look for changes, comparing them to baseline field samples and predictions made using PNNL's supercomputer. At the end of the monitoring period, rock samples will be extracted, and they are expected to exhibit limestone crystals caused by the CO2 reacting with minerals in the basalt. Lab tests and computer simulations predict that 20% of the CO2 should be mineralized within 10-15 years.

"Earlier lab tests on basalts from the region have demonstrated their ability to react with CO2 to form carbonate minerals, the safest and most permanent form for storage," McGrail said in a press release. But that was only phase one of the experiment. "However convincing the lab data may be, proving the same processes operate deep underground can only be done by conducting a field test. We've taken the first steps in Wallula." This PNLL video gives a good overview:

According to recent DOE estimates, the United States and portions of Canada have enough capacity to store as much as 900 years of CO2 emissions this way. If the Wallula demonstration is successful, basalt flows in many parts of the world may serve as storage locations to store CO2 emissions. Of course, successfully demonstrating sequestration is only half the battle: engineers and bureaucrats will still have to work out how to economically transport the captured CO2 from industrial facilities to the burial site. According to Nature magazine, even if a carbon-mineralization industry took off, establishing it on a global level would require an undertaking on the scale of rebuilding the oil industry. So let's not hold our breath. The demonstration has been 80 percent funded by the DOE's National Energy Technology Laboratory. Other contributors include Schlumberger, Royal Dutch Shell, Boise Inc., and Portland General Electric.

Will mineralization eliminate the public's fears of leakage?