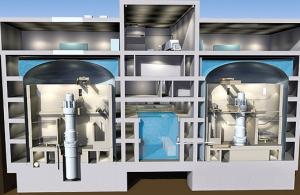 Maybe the U.S. nuclear renaissance hasn't fizzeled. Maybe the whole paradigm has simply shifted away from building single 1,000+ megawatt behemoths, to mass producing small modular reactors ranging in size from 45 to 300 megawatts. Just months after Babcock & Wilcox signed an agreement with the DOE that started federal funds flowing into their mPower small modular reactor project, engineers will begin drilling core samples, and determining geologic, hydrologic and seismic conditions near the Clinch River in Tennessee - hich are the initial steps before building the world's first commercial small modular nuclear reactor for the Tennessee Valley Authority. Under the agreement, the DOE will provide mPower with $79 million the first year, and $226 million or more in federal funding could be available, subject to further appropriations from Congress. "This award represents another key milestone in the work to establish the world's first commercially viable SMR nuclear plant," said E. James Ferland, President and Chief Executive Officer of B&W. Looking back, the momentum for all things small started after Fukushima but took off last year when the DOE announced it would provide $452 million in matching grants to companies developing small modular reactors. Then last November it announced the first winner, Babcock & Wilcox, a respected maker of nuclear reactors for Navy ships and submarines (mPower website).

The new funding follows hundreds of millions of dollars Babcock & Wilcox has already spent on developing its 180-megawatt reactor design. Sensing change in the air, several other companies have also been investing in small modular reactors, including Holtec, Westinghouse Electric, and the startup NuScale, which is supported by the global engineering firm Fluor. It's no coincidence that new Department of Energy Secretary Ernest Moniz feels

that SMRs are "a very promising direction that we need to pursue," which he publicly declared during his confirmation hearing in April, adding, "I would say it's where the most innovation is going on in nuclear energy." Since the average U.S. nuclear reactors is more than 1,000 megawatts, the drive to downsize marks the end of business as usual. Babcock's mPower reactor, just 13 feet in diameter and 83 feet high, can produce 180 megawatts of power, about 15 percent of the power of a large new reactor. (The mPower spec sheet)

So what's behind mPower's big-Mo? Dan Stout, senior manager for SMR Technology at the Tennessee Valley Authority (TVA), said that the TVA's long-term hope is to deploy SMRs at the sites of retiring coal plants. This isn't an isolated problem. Another utility, Ameren Missouri, which is working with Westinghouse, is also saddled with aging coal plants supplying 80 percent of its electricity, and the company is worried about a future of forced regulatory retirements. Shuttered coal plants would mean that Ameren would have to replace lost baseload power. Solar and wind power are intermittent, requiring fossil-fuel backup, Pat Cryderman, the manager for nuclear generation development at Ameren, told Technology Review. He added that burning the natural gas backup fuel adds costs and emits carbon dioxide. Although existing nuclear reactors, which use cheap fuel, can provide electricity at lower cost than coal or natural gas plants, building a traditonal nuclear plant is very expensive. Reactors that generate over 1,000 megawatts can run more than $10 billion to build, a risky investment for any company. Also, utilities are now wary about adding mult-gigawatts when power demand is growing slowly. But costs for small modular reactors top out at a few billion dollars, and additional reactors can be added as they're needed.

The final obstacle for mini-nukes

Outside the U.S., small modular reactors could serve as "starter reactors" for countries that have no nuclear power, no budget for a big nuclear plant and grids too weak to support one anyway. But back in the US, there is still one daunting economic challenge for small modular reactors. Even if they can elbow conventional nuclear reactors aside, they still might not be able to compete with the low price of natural gas. Energy Secretary Moniz admitted that there are many unknowns, but said that the research was important to pursue. "I think the issue... can be determined only when we, in fact, do it, is to what extent will the economics of manufacturing lower the costs relative to larger reactors," Moniz said at his confirmation hearing. "There is a great potential payout there, which goes on top of what are typically very attractive safety characteristics, for example, in the design of these reactors."

That article was very informative. Since SMRs aren&#039;t n energy producing reality yet, I can see why they weren&#039;t discussed. But that price differential might hold for the smaller reactors too, I don&#039;t know.

As a side note (my first reply to your post is below) there are regulated utilities where state legislatures have passed laws against paying the developers up front. I&#039;m pretty sure that&#039;s true in Missouri and Florida. So it&#039;s a mixed bag, which is causing Ameren, the Missouri utility, to actively consider building SMRs with Westinghouse as aging coal plants are shut down.