How much of your Thanksgiving Dinner is genetically modified? | AIChE
Skip to main content

How much of your Thanksgiving Dinner is genetically modified?

Tomorrow is a favorite American holiday among many and as we all know, the central theme is FOOD. How much of the food we eat on Thanksgiving has been influenced by science and chemistry? PopSci has put together an interesting photo gallery reviewing the genetic modification of the Thankgiving Dinner--everything from biscuits and gravy, pumpkin pie, vegetables, and of course, the turkey. This via PopSci:

Even if you harvested your own heirloom vegetables, used stevia as a sugar substitute and cooked with peanut oil, odds are that your Thanksgiving meal was still genetically altered. Your turkey, turducken or ham most likely ate GM products during its life. Livestock have been fed genetically engineered crops since the crops were first introduced, according to a study by the University of California-Davis.

Most commercial livestock animals are fed GM crops, notes John Anderson, an economist with the American Farm Bureau Federation. "Turkeys eat a corn and soybean meal-based diet, and those feeds are for the most part from genetically modified crops," he said.

Click on the Turkey Dinner below to check out PopSci's photo gallery: 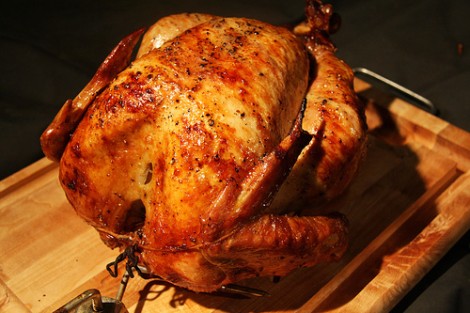 Do you consider genetically engineered food a positive aspect of science?

There is such an upside to GM food. In a world where resources are being stretched to the limit (specifically: water) and millions are going without. How can we not look at solutions that will make it easier to grow more nutritious food with fewer chemical inputs? There a examples of a plant being ready to deliver that will greatly improve the diet of the people but is denied because of fears of GM. Is GM that different than animal husbandry? From taking the seeds from the best plants to grow the next seasons crops? It is all artificial selection. Granted, GM happens at a much faster pace than artificial selection could ever go and there should be some checks and balances - the industry should not be running around uncontrolled. But we should at least give these solutions a chance and let the science speak. Also, having said all that. We try to use (when we have a kitchen) as much local and heirloom varieties - we think they taste much better. Heritage turkeys are fantastic is you can find one. But these are luxuries - if the choice was GM food or no food, I would go GM without a second thought.