Widely adopted in education, the experiential learning theory states that â€œlearning is a holistic process of adaptation to the world... thinking, feeling, perceiving, and behavingâ€ (Kolb and Kolb, 2009). This serves as the theoretical foundation for the laboratory learning modules in chemical engineering education (Chen et al., 2016b; Cline et al., 1997), where students gain first-hand experience with data collection and analysis through specialised equipment and tools.

The ubiquitous use of computers and the Internet has enabled educators to enhance experiential learning with e-learning materials such as digital notes and instructional videos. By sharing such resources online, educators in the USA have started a revolution with the concept of massive open online course (MOOC) (Hew and Cheung, 2014; Hyman, 2012). Literature implies that hands-on laboratory modules are still the most effective in delivering experiential learning.

This study reports a strategy that has been implemented in the Undergraduate (UG) Teaching Labs of the Chemical Engineering Department at Imperial College London, UK, for employing videos as an instruction tool delivery of a hands-on laboratory module while enhancing independent learning. At the core of this strategy are the instructional videos that students have to watch before the experiments. These videos reduce the training time that teaching assistants have to spend on each group of students and hence enhance the quality of intellectual engagement and helping the students to become much more independent learners. The paper aims to share good practices that are based on observations and survey results, so that interested educators can readily adopt our strategy according to their needs.

From the academic year (AY) 2016/2017 the teaching of 1st year UG labs (Foundation Labs) was supplemented using instruction videos. The Foundation Lab consists of 7 experiments conducted by the students in groups of 2 or 3 on a rotational basis. Prior to AY 2016/17, the groups were provided with a written handout for each experiment. Each experiment was also assigned a graduate teaching assistant (GTA), who is tasked with guiding the students through the experimental process. From AY 2016/17, the use of instructional videos sits alongside the written handouts and the GTAs to give the students further guidance before and during carrying out the experiments.

Initially students were not provided with access to instructional videos, only the handouts, and GTA supervision. This was to provide a control, against which student engagement and learning outcomes were compared to when the videos were in use. After 3 cycles of experiments videos were made available to watch any time for the remaining duration of the course.

Anonymous polling of the students via Mentimeter found the studentsâ€™ viewed the use of video on-demand positively (See Figure 1).

While responses to the videos were largely positive, some free text comments revealed how video-led instruction could be adapted to improve the implementation.

However several respondent indicated that the videos should contain more information and expand beyond the scope of the handouts in some cases:

â€œPerhaps give more hints and tips that arenâ€™t on the handouts.â€

The students revealed in a focus group discussion that the videos helped them gain confidence before attending the labs, arriving better prepared.

Student responses indicate that the videos act as supplementary material to the handouts, adding to the student experience. Students stated that â€œwatching the videos saved time, and some students felt more efficient with their lab time, however the importance of having a GTA in the lab available was helpfulâ€.

GTAs noticed a marked difference in the output of the students once videos were released, noting that risk assessments (the first assessed work for each experiment) improved after the introduction of video instructions and were better than student cohorts from previous years. GTAs noted â€œa change in studentsâ€™ behaviour, they started to run the labs more independently after watching the videos.â€ This is in keeping with the student comments that videos made the student feel more independent. GTAs suggested â€œthere should be a clear differentiation between demonstrational/operational and problem-solving videos.â€ GTAs suggested that problem-solving videos could be produced to address common operational issues students have, â€œfreeing GTAsâ€™ time, making them available for further discussion of theoryâ€.

Interviews were carried out separately for the Principle Teaching Fellow and Lab Technician to understand their perception of the Impact operational Videos have on teaching.

Based on their perceptions of the student behaviour once the videos had been implemented (after the 3rd experiment) highlighted that students came to the labs â€œmore prepared to operate the equipmentâ€ and as students knew more about the operation of the equipment, it made GTAs more free to act in â€œan advisoryâ€ role.

â€œThey appeared a lot more confident. You feel that they are more prepared, as theyâ€™ve seen the equipment on film and straight away you can see themselves familiarising themselves with the equipment, and comparing it to the video.â€ - Andrew Macey, Lab Technician

By allowing students to focus less on operational issues, the course co-ordinators could also improve their own teaching.

â€œStudents were asking [me] a lot of engaging questions, above and beyond the project scope and that pushed me to think about how we can make it more open ended, because students were starting to take the interest, they were becoming more engaged and more independentâ€ - Umang Shah

The videos also contributed to making organisation of the labs â€œmuch more straightforward and simpler to co-ordinateâ€. Students came to labs better prepared; more students were able to â€œfinish [their experiments] with 3 hoursâ€. Videos also helped standardise the teaching of the operational aspect of the equipment in the labs.

This study highlights a paradigm change in experiential learning. Video-led instruction in a practical learning module enabled students to take charge of their own learning, as well as freeing up valuable education time. This allowed for more intellectually stimulating discussions regarding the projects, their contexts, and wider applicability of the work. Students engaged well with shorter videos, and multiple short length videos covering specific aspect of the experiment were found to be more effective. This study demonstrates the potential for employing videos to transform the role of lab demonstrators to facilitators and ultimately mentors, thereby creating a cohesive enabling environment for independent learning. 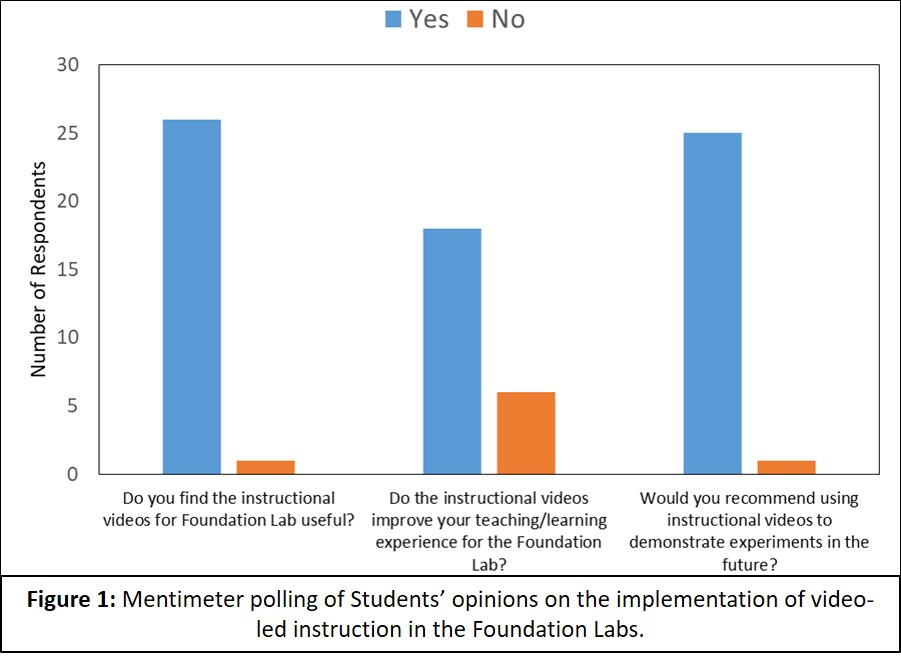