Epoxide ring-opening is a key reaction for synthesizing a range of lab-scale and commercial compounds. A major application is the industrial production of polyols, which are primary raw materials for polyurethane plastics. This process involves the catalytic addition of an epoxide to an alcohol-based initiator, resulting in the formation of a Î²-alkoxy alcohol, which can further react with additional epoxide molecules to yield the desired polyol. Industrially utilized epoxides such as propylene oxide usually create a mixture of 1Â°-OH and 2Â°-OH ring-opening products (figure 1). The latter, however, exhibit poor reactivity for certain polyurethane applications and require substantial reprocessing prior to usage. This tedious step can be avoided by employing regioselective catalysts that predominantly yield 1Â°-OH products. However, nearly all conventional catalysts are unselective except for B(C6F5)3, which exhibits high selectivity towards 1Â°-OH products. This work explains its unique behavior in epoxide ring-opening, through the formation of catalytically active adducts with H2O1 and alcohols2 due to its strong Lewis acidity. Further on, we describe the influence of hydrogen bonding additives on the regioselectivity of the B(C6F5)3â€“H2O adduct and demonstrate a route to enhance its selectivity through the addition of Î±, Î²-diols.3

After studying this system at different conditions, we observed two unusual trends â€“ reaction rates significantly varied with alcohol type (1Â°,2Â°,3Â°)/H2O levels and reaction selectivities increased with conversion. After rejecting deactivation as a factor, we used DFT predictions to propose the catalytic activity B(C6F5)3â€“H2O/ROH adducts. Then, combining experimental data with theory, we developed microkinetic models which supported the simultaneous existence of Lewis acid, alcohol-mediated and water-mediated catalytic pathways (figure 2). Additionally, figure 3 also depicts the interesting trend where selectivity increases as a function of conversion in the absence of any additives. Ruling out product consumption as a factor, we proposed that reaction products P1&P2, were interacting with the B(C6F5)3â€“H2O adduct via hydrogen bonding and enhancing selectivity of the species. After verifying this hypothesis by adding co-catalytic amounts of P1 and P2, we sought to find external additives which could be used to deliberately enhance regioselectivity. Of all our target molecules, certain planar Î±, Î²-diols were most effective and presented a hydrogen-bonded complex which directed the incoming nucleophile in a manner that gave high selectivities.

This work demonstrates the existence of novel alcohol and water-mediated catalytic pathways for B(C6F5)3. As these have not been well-studied for similar highly Lewis acidic catalysts, this merits further work. Moreover, having demonstrated the influence of hydrogen bonding on reaction selectivity, we were able to enhance selectivity through the judicious addition of Î±, Î²-diols which could also extend to other such highly Lewis acidic catalysts.

The authors would like to thank the Dow Chemical Company for its financial support towards this work. 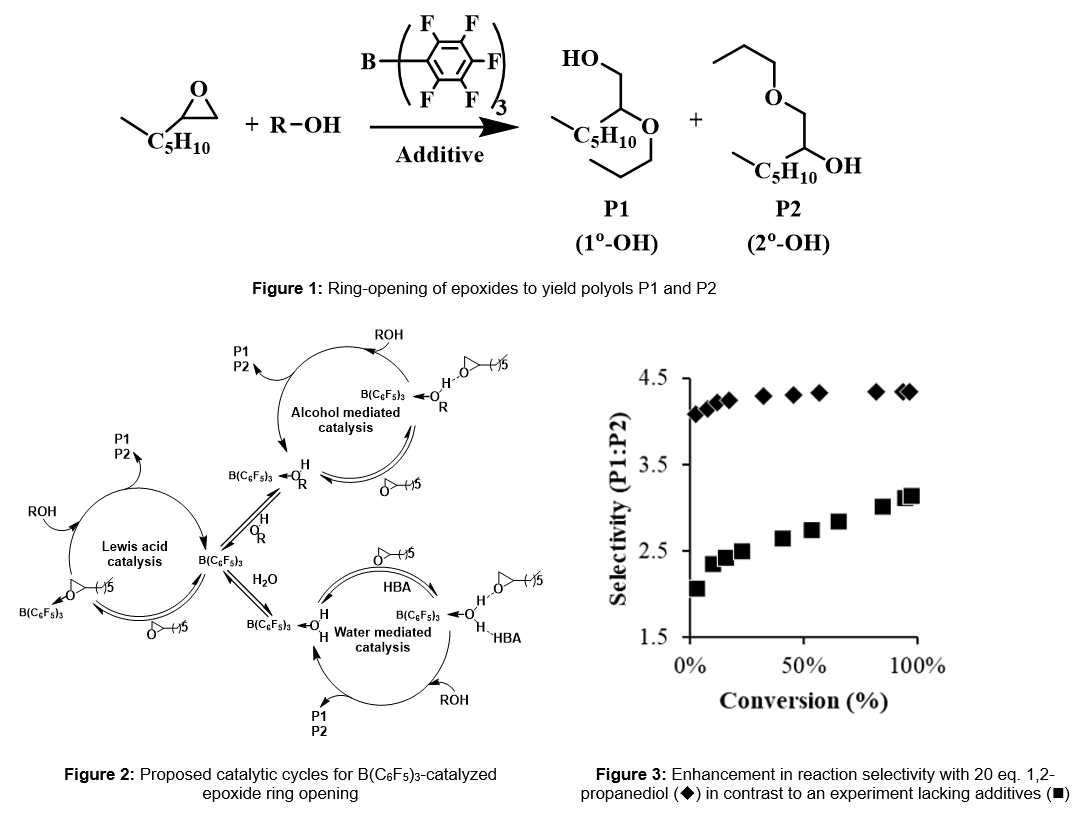