Lumefantrine is an anti-malaria drug developed in the 1960s in China to address the increasing resistance of falciparum malaria to chloroquine and other previously used malaria drugs. However, due to the hydrophobic nature of Lumefantrine, it suffers from low bioavailability, and therefore a high frequency of dosing is required, increasing the risk of patient non-compliance. Patient non-compliance leads to the development of resistance to anti-malarial drugs. Given the above concerns, and in collaboration with Princeton University, a scaled-up manufacturing process for Lumefantrine nanoparticles has been developed (based on the polymer-directed, rapid precipitation technique, Flash NanoPrecipitation, developed by Princeton University). The impact of formulation on drug product performance and process scale up was assessed, meeting the theme of the ECI conference. The scaled up Lumefantrine nanoparticles have the potential to demonstrate enhanced bioavailability compared with the commercial product and, therefore, serves as a promising new anti-malaria formulation to address the limitations of the current Lumefantrine drug products.

A schematic process flow diagram for the manufacturing process is presented in Figure 1. Four unit operations are included in the manufacturing process, which are flash nanoprecipitation (FNP), flash evaporation (FE), tangential flow filtration (TFF) and spray drying (SD). The FNP step was carried out by mixing four streams of liquid in a multi-inlet vortex mixer (MIVM) designed in-house (Feng, 2019). A total of 300 L of FNP suspension was processed in order to obtain a theoretical quantity of 675 g Lumefantrine nanoparticles (equivalent to 225 g of Lumefantrine).

As can be seen from the stability data of FNP suspension in Table 1, the stability of FNP suspension was not long enough to withstand the total running time of TFF and SD. In addition, it was also anticipated that the 10% THF content in the FNP suspension would cause significant particle size enlargement during TFF (due to Ostwald ripening effect) if the FNP suspension were to be processed in TFF straightaway. For these reasons, a FE process was applied to increase the stability window. A decrease of THF content from 10% in the FNP suspension to approximately 1.2% in the THF lean suspension was obtained from this FE step, reducing the Ostwald ripening effect and prolonging the stability window to 4 days. Given the long running time of the FE step, three sublots were employed in the FNP step to ensure no stability issues of the FNP suspension would be encountered and a limited number of disruptions to the continuous manufacturing process would be made. It can also be noticed in Table 1 that there was no significant change in particle size from the FNP to the FE step. The TFF step was necessary, since otherwise there would be a tremendous volume to be spray dried, making the manufacturing process uneconomical. The slight increase in particle size during the TFF step, as shown in Table 1, was a result of the transmembrane pressure exerted on nanoparticles against the membrane, causing a limited degree of agglomeration. Nanoparticles were also consistently sheared in parallel direction to the membrane by the high velocity inlet flow to reduce such particle deposition. The redispersion of Lumefantrine nanoparticles was also investigated. As can be seen in Table 1, the particle size distribution upon redispersion was not hugely different from that before spray drying, being in the lower half of the nano size range. A low water content and acceptable yield were obtained as well. The solubility and kinetic stability of the final Lumefantrine nanoparticles can be seen in Table 2. The sustained release over 24 h at a high degree of supersaturation (~300 Î¼g/mL compared with ~15 Î¼g/mL for crystalline Lumefantrine) suggested potential enhanced dissolution of the Lumefantrine nanoparticles.

In conclusion, a scale-up continuous manufacturing process (FNP-FE-TFF-SD) to produce Lumefantrine nanoparticles has been built with an overall process yield of around 60%. Lumefantrine nanoparticles manufactured from this process were capable of being reconstituted into a nanosuspension and delivering a sustained high level of supersaturation as compared with crystalline Lumefantrine. A potential route to address growing concerns associated with low bioavailability of Lumefantrine has therefore been demonstrated. 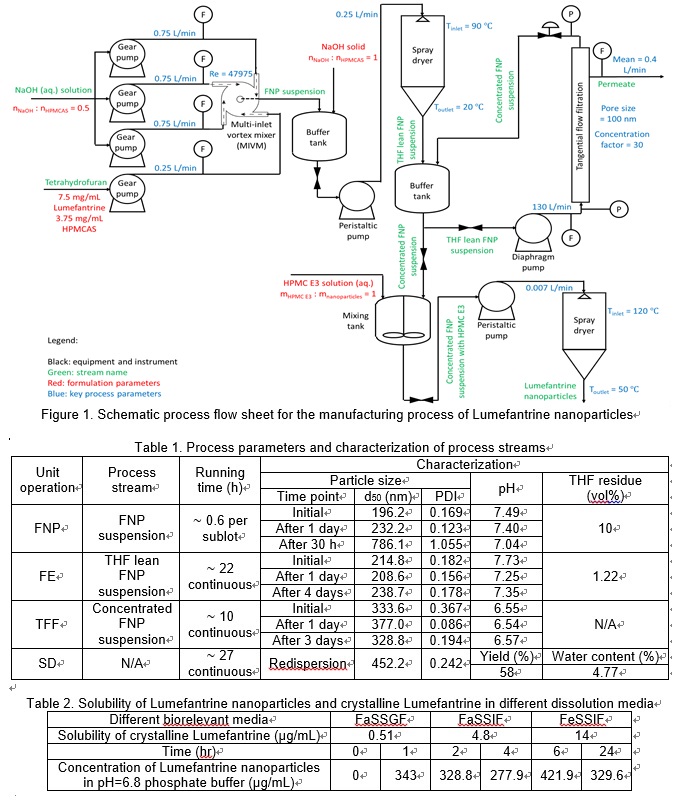