(147e) Multiphase Microchannel Separator: A Microfluidic Platform for the Intensification and Modularization of Solute Extraction and Phase Separation

In the first stage of MMS operation, an accelerated solute extraction is achieved via the generation of uniform solvent micro-droplets dispersed in a solute-rich feed. The arising benefits of this system relative to conventional extraction, including smaller characteristic diffusion time, higher interfacial surface area and lower interfacial film thickness, lead to the intensification of solute transfer from the aqueous feed to the organic solvent.
In the second stage, a continuous and gravity-independent phase separation is realized via a careful utilization of the platformâ€™s flow geometry and surface properties. The pillar of this microfluidic manipulation consists of passing the two-phase flow through a series of micro-posts with gradually increasing gap spacing. In turn, this micro-architecture design creates a capillary force gradient â€˜fieldâ€™ opposite to the direction of the flow, which guides the non-wetting phase (solvent) to exit through the outlet with the least resistive path (the organic outlet).

In this work, we present the experimental findings of solute extraction and phase separation in MMS 2.0. The investigated system of Isopropanol (IPA solute) - Water (feed) - Ethyl Hexanoate (organic solvent) is of current industrial interest. Three parameters were used to assess the extent of two-phase separation; the aqueous and organic composition % in the aqueous and organic effluents, respectively. The third parameter is the â€˜two-phase separation %â€™ describing the distribution of the organic phase among the two outlets (100% corresponding to a total exit of the solvent from its appropriate organic outlet). The level of solute extraction was determined by measuring the concentration of IPA in the effluent solvent.

The results showed that the highest phase separation performance was achieved when lower IPA amounts were introduced in the aqueous feed. At 5% and 10% w/w IPA in the feed, the two-phase separation % were consistently measured at near 100% across all the investigated inlet O/A flow ratios. These values dropped to a minimum of 50% and a maximum of 85% under 20% IPA w/w in the feed. This outcome was expected given that increasing the IPA amount in the water reduces the aqueous-solvent interfacial surface tension, which in turn diminishes the capillary pressures between the micro-posts needed to separate the phases.
Additionally, it was observed that for all the investigated IPA amounts (5%, 10% and 20% w/w), increasing the inlet O/A flow ratio resulted in a higher proportion of organic phase leaving the organic outlet. It was determined that increasing the inlet O/A flow ratio will lead the now more abundant organic phase to displace the aqueous phase exiting the organic outlet, thus improving the separation performance.
As for solute extraction in MMS 2.0, it was noticed that the IPA extraction was enhanced under higher inlet O/A flow ratios. This effect was attributed to the increase in fresh solvent availability for IPA extraction. Moreover, it was observed that for any given inlet O/A flow ratio, the IPA extraction increased under higher IPA amounts in the feed. This outcome can be explained by the improved mass transfer of IPA from the aqueous phase to the organic one when more IPA existed in the water.

On the other hand, it was shown that varying the flow ratio of the effluent streams can alter the proportion of phases exiting from a given outlet, leading to major effects on the separation performance. More importantly, this parameter can serve as a simple yet effective tool to maximize the separation performance under a given set of process conditions. Operating under a constant total flow rate of 2 ml/min, inlet O/A flow ratio of 1:1 and in the absence of IPA, it was shown that changing the outlet O/A flow ratio from 1:1 to 1.6:1 can increase the resulting two-phase separation from 75.6% to 94.8%.

Finally, as part of our efforts to develop the next-generation high-throughput integrative MMS 3.0 platform, we have investigated the effects of increasing the channel depth, and thus the plate processing capacity, on the resulting separation performance. Comparing the 0.3 mm deep plate of the MMS 2.0 to novel plates with channel depths of 0.3, 2, 4 and 6 mm, we have determined that the separation performance was significantly improved under all the investigated deeper channels. This enhancement was mainly attributed to a possible contribution of the buoyant forces in deeper channels to phase separation. These results strongly suggest that the development of a high-throughput modular platform for the intensification of solute extraction and phase separation processes is within technical reach. 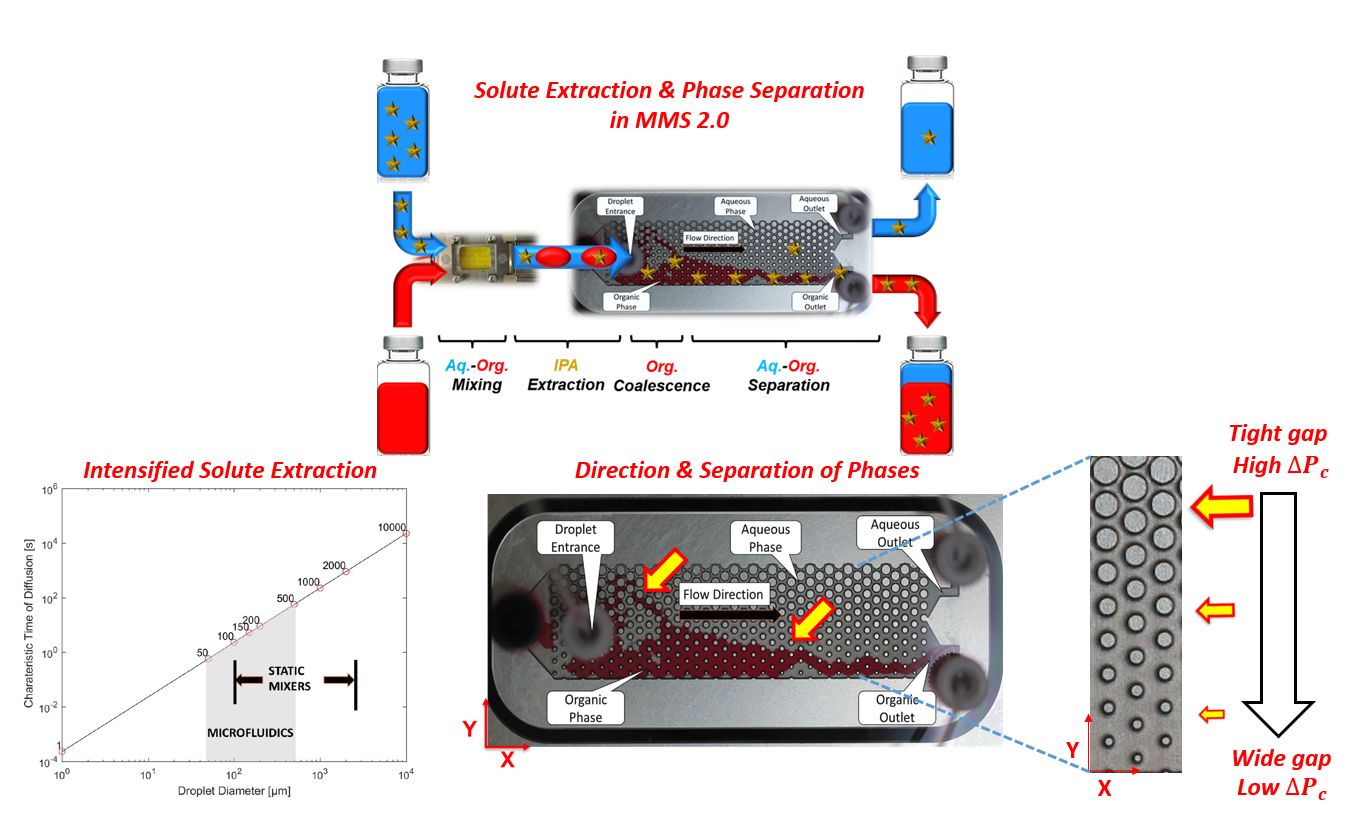