Design and Optimization of Modular Process for Intensification of Carbon Capture and Conversion | Founder Societies: Technologies for Carbon Management
Skip to main content

Utilization of CO2 from low cost sources such as flue gas to produce syngas, a precursor for many chemicals and liquid fuels can reduce CO2 emissions while presenting economical opportunities. About 2 Gt/yr. of fuels and 200 Mt/yr. of chemicals can be produced via CO­2 utilization [1]. Current CO2 utilization technologies implement standalone CO2 capture and subsequent utilization resulting in higher energy costs.  We design and optimize a multi-functional and modular process which is intensified to simultaneously capture and utilize CO2 from power plant flue gas while employing a variety of methane sources such as unused methane, natural gas, fuel gas, biogas or landfill gas. The designed technology can be coupled with existing CO2 capture and utilization technologies and is flexible enough to allow centralized and distributed production of syngas. The process operates cyclically and involves an integrated adsorption-purge-reaction system which adsorbs CO2 from flue gas in a column filled with zeolite 13X in the first step which is then purged with methane rich feed in the second step of the cycle. This purge mixture containing predominantly CO2 and CH4 essentially becomes feed for the dry reforming of CO2 to produce syngas. Purging with reactor feed i.e. CH4 rich gas in this manner achieves regeneration of adsorbent while eliminating the need for energy intensive pressure or temperature swings necessary in every cycle with existing adsorbent based capture technologies. This intensification of CO2 capture without temperature or pressure swings and reactor feed premixing leads to reduction in cost of CO2 capture and utilization. The overall process is simulated using a high-fidelity non-linear algebraic partial differential model to elucidate the effect of important decision variables and key tradeoffs in process performance metrics concerning the adsorption and reactor sections [2]. Optimization of such a high-fidelity process model with objective and constraint values that can only be obtained after performing computationally expensive simulation is challenging and non-trivial. A data-driven constrained grey-box optimization framework based on modified filter technique [3] is used to maximize CO2 utilization and/or minimize costs while meeting process and product specifications. It is possible to achieve about 99.67 % net overall CO2 utilization while accounting for auxiliary emissions and operate at a total cost ranging from $110–120 per ton of syngas by implementing this integrated process. Of the total CO2 input to the process, as much as 15 % is captured with negligible cost from flue gas and the rest is pure CO2 obtained from existing capture plants while still achieving around 91 % overall CO2 utilization. This is thus a very promising option to reduce the cost of CO2 capture and utilization especially when applied in conjunction with other existing technologies in a grid or network. 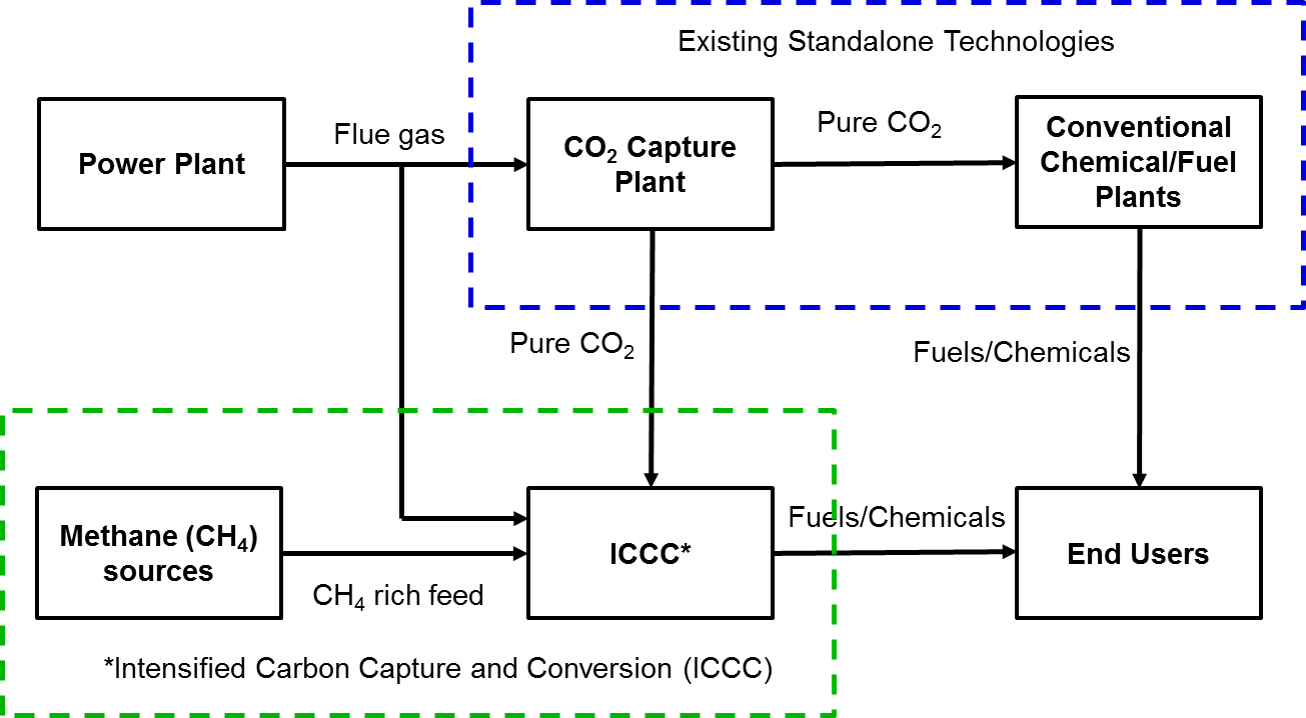