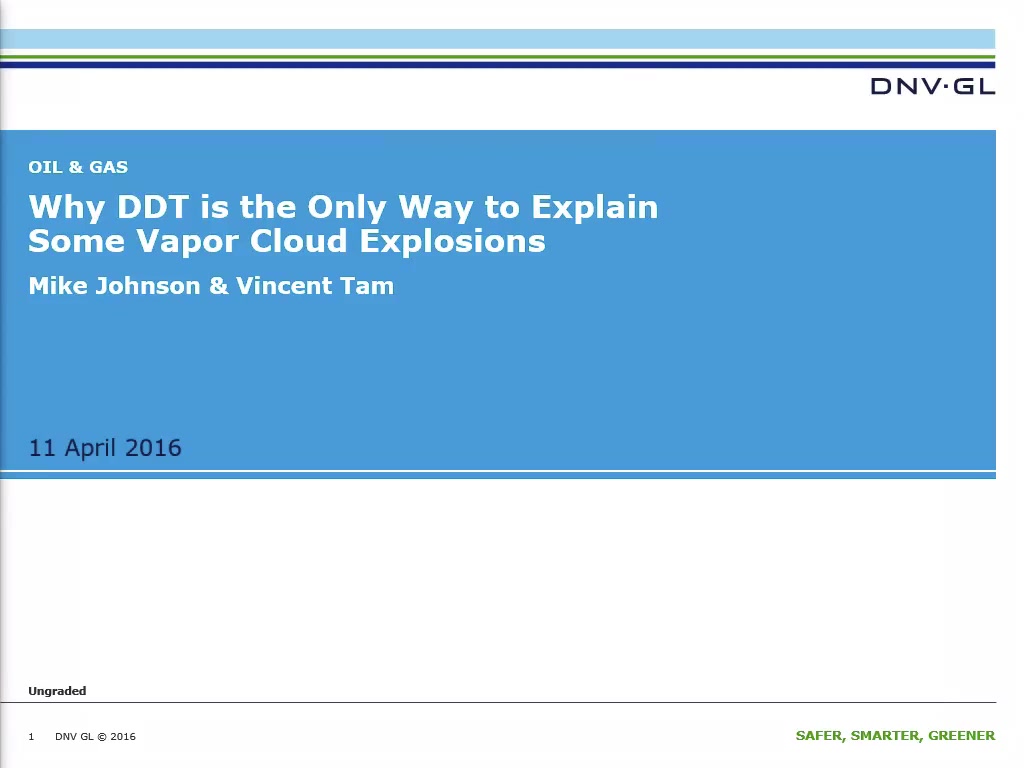 The possibility that Deflagration to Detonation Transition (DDT) occurs in vapour cloud explosions (VCEs) in industrial accidents has generally only been recognised for very reactive fuels such as hydrogen and ethylene.  Assessment of the explosion hazards and risks associated with less reactive fuels such as propane and other alkanes has generally been based around the assumption that, in practice, only a deflagration can occur.  This has the benefit that the magnitude of the maximum hazard to surrounding areas is defined by the physical parameters of any congested process region and not by the extent of the vapour cloud, as would be the case if there was a sustained detonation.  However, following the Buncefield incident in the UK in 2005, a considerable amount of effort was expending in explaining the major VCE that occurred.  This initially involved gathering and interpreting the evidence from the incident but then extended to experimental and theoretical research over two phases and lasting five years.  Further research since, together, showed that DDT was achieved with dense vegetation and regions of pipework; the extent of which were not large (or order a few metres).  The results from this project and others will be summarised, indicating why the only explanation that is consistent with all of the evidence is a DDT soon after ignition of the cloud, with a sustained detonation then propagating through the majority of the cloud.   Reference will be made to other incidents where similar evidence was observed.  Awareness of the significance of such evidence will be important in the investigation of future VCEs.  In addition, the possibility of DDT needs to be recognised in the methodologies used to assess VCE hazards.

Preview Presentation:
Presenter(s):
Vincent Tam
Once the content has been viewed and you have attested to it, you will be able to download and print a certificate for PDH credits. If you have already viewed this content, please click here to login.

Shelter-in-place Design Considerations - How Safe is Safe Enough?
Facilities with potentially significant toxic and/or flammable hazards often establish shelter-in-place locations (SIPs) in order to mitigate risks associated...
The Application of Finite Element Analysis to the Remaining Life Assessment of Ageing Cold Boxes
Cold boxes, or more precisely, the brazed aluminum heat exchangers (BAHX) that comprise them operate unseen and do not lend themselves to the inspection...