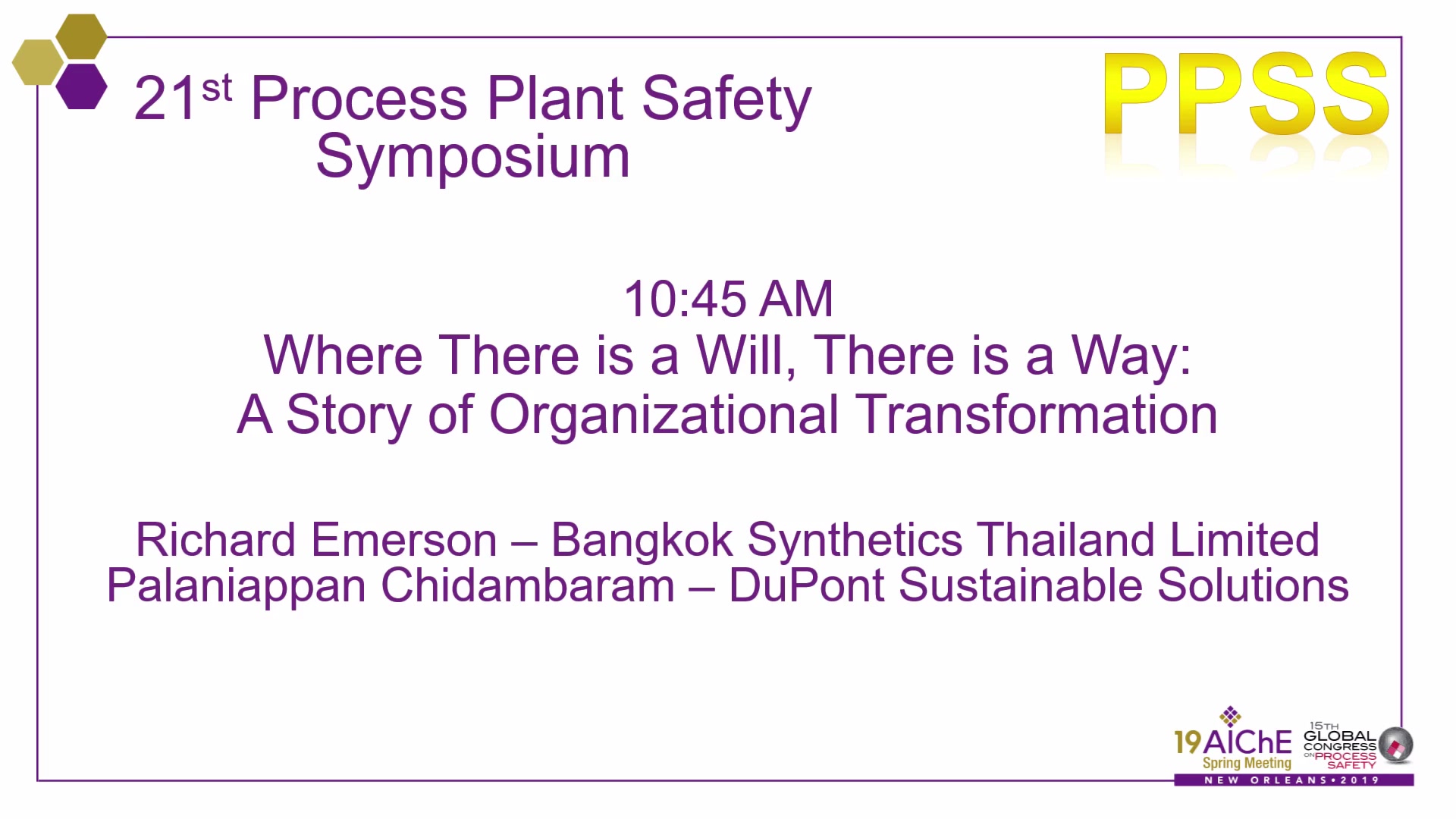 Successful organizational transformation requires clear vision, inspirational leadership, management commitment, effective communication, and engagement of employees at all levels. The Bangkok Synthetic Company Limited (BST), the largest producer of mixed C4 products, including synthetic rubber, in Southeast Asia operates plants in two sites in Thailand and employs around 700 people. In 2013, BST embarked on a journey to turn their safety vision, â€œno harm to anyone anytime,â€ into a reality with a focus on process safety management and cultural transformation.

This presentation will share some of the key leadership decisions including the initial approach taken in transforming the organization, how to engage the organization, and the outcomes and benefits realized in the process.

With a desire to go beyond compliance and manage risks effectively, BST dedicated a significant amount of full-time resources (people, time and effort) to strengthen their existing procedures, internal competencies, and capacity in Process Hazard Analysis while focusing on implementation and improvement of other process safety management elements. A risk-based approach was adopted in the PHA implementation with a focus on high hazard sections in three of the units. Risks identified were prioritized, and action plans were drafted to implement recommendations identified to mitigate risks and interim action plans were developed where applicable. With a focused effort on PHA implementation, change in attitudes, mindset, capability, awareness and level of confidence was evident among the PHA team. This prompted BST to reflect on the impact senior and middle management could have on the entire organization if it engaged the front-line employees.

No Harm to Anyone Anytime

BST leadership decided to move the organization from a mindset focused on compliance to one focused on commitment. Surveys, interviews, focus groups and site assessments were carried out as part of the diagnostic process. Some of the key insights from the diagnostics process were prevalence of silo mentality, compliance driven mindset but not fully compliant, one-way communication, and lack of alignment on value for safety among the management team. In addition, safety was viewed as a â€œmanufacturing issueâ€, not a company issue. The key decision by the leadership was to involve and engage the organization in the entire process - understanding the current state and realizing the need for change, and in the reaffirmation, clarification, and commitment to the safety vision for the future. Several workshops engaging the senior and middle management were conducted for envisioning the future with more clarity, and leading & managing change effectively. â€œNo harm to anyone anytimeâ€ was reaffirmed as the vision, but greater clarity was added to describe characteristics needed to achieve it.

Twenty-five senior and middle managers from different functions embarked on a coaching program with a focus on four core competencies: the value for safety, my role in safety, engaging others and felt leadership. An Operational Discipline (OD) program was initiated with the leadership of front-line supervision to improve the management system implementation effectiveness and ownership. The Operational Discipline initiative focused on evaluating the individual and organizational characteristics and identifying improvement areas by front line employees, and presenting the action plan to management for approval.

The organization shifted from a top down approach to safety to safety ownership at all levels and functions. The Safety Observation Tour (SOT) process was redefined, but the biggest change was evident in the tone of the conversations during observations. SOT was no longer viewed as â€œa police encounterâ€ or tell oriented discussion, but shifted to a tone involving asking questions which encouraged engagement, idea sharing, and learning.

A concerted effort was made to get management throughout the company aligned on understanding the vision, the values, and the requirements, and then cascading this understanding all the way down through the organization. The cascade process encouraged feedback and questions which were collected and then analyzed to define improvements in both the clarity of messages and practices. These improvements were built into a second round of cascades, and feedback indicated a desire by the organization to make the cascades an annual practice.

Shift in Values, Attitudes and Beliefs

The overall change in mindset was felt in the organization at all levels and decisions made reflected the value given to safety over production, cost, or schedule. This was evident through an employeeâ€™s courage to question (which the culture previously did not encourage) the ability of the relief systemâ€™s ability to handle higher feed rates being proposed, and managementâ€™s decision not to conduct tests outside the safe zone even though that meant sacrificing potential income with high market demand for the product.

Felt leadership and operational discipline was demonstrated during a full plant turnaround involving 4000 contractors without an incident. It was the best turnaround result BST has ever experienced with outstanding outcomes both from a timing and safety perspective. For many individuals and senior managers, the turnaround marked a turning point in their view of the new BST safety program. It was proof of the theory that good safety is indeed good business.

A recent survey on values, attitudes and beliefs showed leadership was more aligned, teamwork was better, senior managers had bonded together and were collaborating more effectively. Not only had technical competencies improved, but capabilities in general had developed and there was a very clear shift in mindset and behaviors. Business leaders displayed greater self-confidence regarding safety and paid more attention to the social context of risk.

BST has undergone a tremendous change since 2013 from viewing safety as a purely technical issue to realizing that people are at the crux of any safety effort. In the last four years, BST has changed its focus and discovered that a strong safety culture, role-modeled by senior leadership, coupled with consistent process safety management systems not only improves safety performance, but can also have significant productivity benefits.

While a clear shift from a focus solely on production and profit to one that is safety-driven is evident, the organization realizes that the journey toward a culture committed to â€œno harm to anyone anytimeâ€ is a never-ending journey. Recent analysis of performance has indicated that the implementation of good systems is not enough, and that a focus on defining, measuring, and improving the underlying mindsets, behaviors and skills is required to continue the journey.

Preview Presentation:
Presenter(s):
Palaniappan Chidambaram
Once the content has been viewed and you have attested to it, you will be able to download and print a certificate for PDH credits. If you have already viewed this content, please click here to login.

Error Propagation and Uncertainty Analysis: Application to Fault Tree Analysis
Fault tree analysis (FTA) is a widely used method in the evaluation of safety systems. FTA is based on modeling the behavior of a system by a combination of...
Where Process Safety Must Move
Description: Process safety has long embodied the adage, “If you always do what you’ve always done, you’ll always get what you’ve always got.” Despite the...