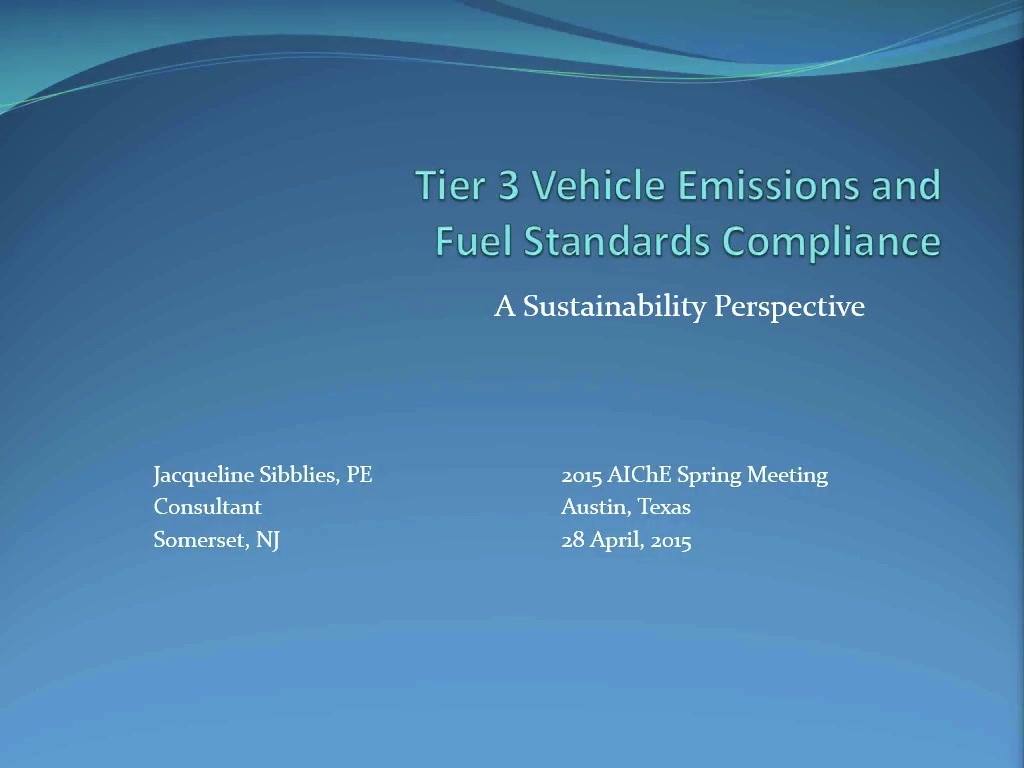 An acute awareness of the increasing detriment of air pollution to ecological survival started developing in the 1980’s. Several industrialized western nations, including the United States, recognized the intricate correlation between air and water pollution, and the cumulative negative effects on plant and animal life, both aquatic and terrestrial. This knowledge led to the promulgation of initiatives/directives on and/or regulations of materials, processes and industrial operations to bring about significant mitigation in the rates of pollutant emissions to the atmosphere.

In the United States, Congress authorized the Clean Air Act Amendment of 1990, which comprised of a comprehensive, and at the time a seemingly stringent, approach attaining air pollution control from sources identified as significant contributors of air pollution, particularly criteria pollutants (VOC, NOx, SOx, CO, PM and Pb) and hazardous air pollutants (HAP). Many of the sources of these emissions were petroleum combustion sources.

Specifically to achieve reduction in emissions of sulfur oxides (SOx) and lead (Pb), the sulfur and lead contents of petroleum products, like diesel and gasoline, had to be reduced. This placed a heavy demand on industry to develop and implement the kind of technology that could accomplish these regulatory objectives. An industry rose to the occasion.

The automobile and petroleum refining industries worked collaboratively to attain combustion engines and systems that met and sometimes exceeded the regulatory standards. This also marked the creation of unleaded fuel and low-sulfur fuel as common consumer lexicon.

Continuous monitoring of the environment has revealed the need for continuous improvement. Environmental regulators globally determine a need for further reduction of air emissions from petroleum combustion sources and consequently further restrictions in sulfur content in fuel. This is evident by similar, simultaneous regulatory actions world-wide - from the United Nation’s UNEP and ICCT working on a program to develop a global sulfur strategy, to the European Nations effecting directives on stringent sulfur-in-fuel standards (Euro 5) to China doing similarly in “China 5” to the United States promulgation of Tier 3.

Fortuitously, the need for improvements in environmental quality coincides with the explosive advancement of technology, particularly in the 21stCentury. This provides industry with an excellent opportunity to yet again collaborate for advancement which will be profitable for business while improving the environment and enhancing human health.

This paper will explore the sustainability benefits of Tier 3 and like regulatory standards.

Preview Presentation:
Presenter(s):
Jacqueline Sibblies
Once the content has been viewed and you have attested to it, you will be able to download and print a certificate for PDH credits. If you have already viewed this content, please click here to login.

Impact of New Industrial Boiler and Process Heater Air Regulations on the Chemical Industry
The US EPA is obligated to develop national emission standards for hazardous air pollutant (NESHAP) for industrial boilers and process heaters. These standards...
The Political Exploitation of the Scientific Illiteracy of the American Public
Neil Yeoman speaks to the VLS about his experience working to help educate the general public about scientific issues that cross over to the political arena.