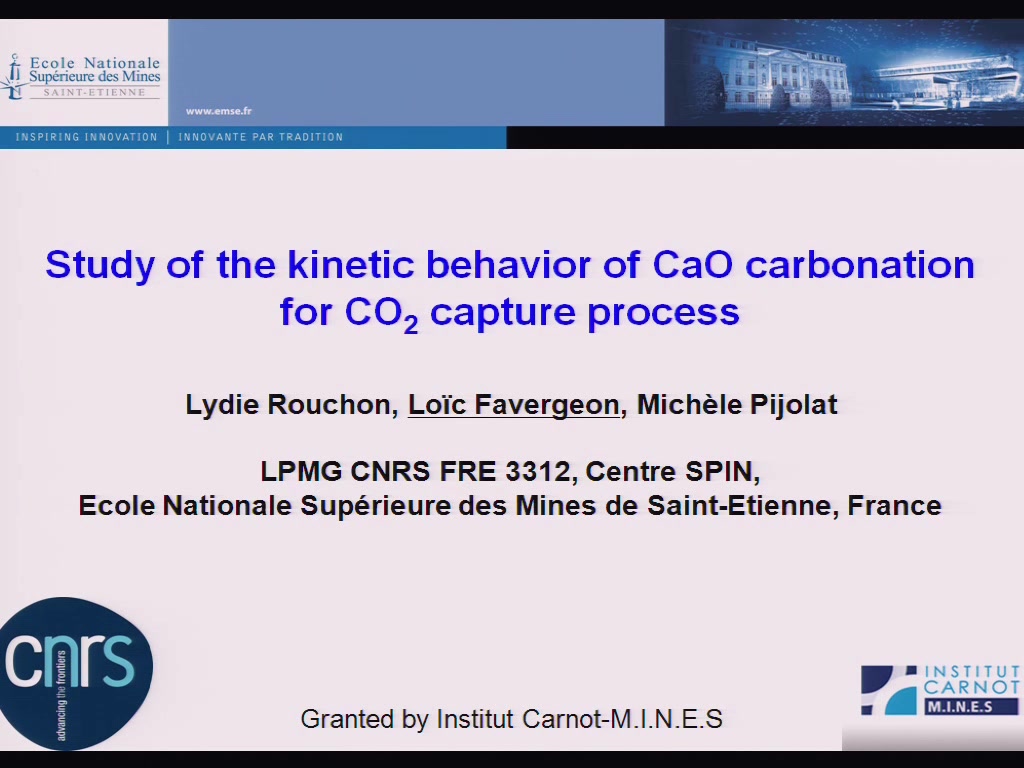 Anthropogenic carbon dioxide (CO2) emissions, major contributors to the greenhouse effect, are considered as the main cause of global warming. So, decrease of CO2 emitted by large industrial combustion sources or power plants, is an important scientific goal. One of the approaches is based on CO2 separation and capture from flue gas, followed by sequestration in a wide range of geological formations. In this aim, CO2 is captured by sorbents like calcium oxide (CaO) in multi-cycle process of carbonation/decarbonation. However, it was shown that the most important limitations of such process are related to the reversibility of reaction. CaO rapidly loses activity towards CO2, so the maximum extent of carbonation decreases as long as the number of cycles increases [1].

In order to well understand the processes and parameters influencing the capture capacity of CaO-based sorbents, it appears important to understand the mechanism of calcium oxide carbonation and to get details on the kinetic law governing the reaction, which has not been really studied up to now. To investigate this mechanism, CaO carbonation kinetics was followed by means of thermogravimetric analysis (TGA) on divided materials. Special care was given to the validation of the usual kinetic assumptions such as steady state and rate-determining step asumptions [2-3].

The aim was to obtain a complete model describing the reaction in order to explain the influence of intensive variables such as carbonation temperature and CO2 partial pressure. TGA curves obtained under isothermal and isobaric conditions showed a strong slowing down of the reaction speed once a given fractional conversion was reached. The slowing down and its corresponding fractional conversion was observed to depend on carbonation temperature and CO2 partial pressure. To explain these results, the evolution of texture and microstructure of the solid during processing was regarded as essential. Reaction at the grain scale induces a volume increase from CaO to CaCO3 which causes a change in the porosity characteristics at the aggregates scale, which could block the access of the gas to the core of aggregates. So carbonation reaction can be described by a two scales model: at a nonporous grain scale for the chemical reaction and at the aggregate scale, for the CO2 intergranular diffusion. The kinetic modeling is able to couple both modeling scales in order to explain the kinetic slowing down and the influence of temperature and CO2 partial pressure on the reaction rate.

The coupling is realized by the combination of the thermohydraulic modeling (heat transfer, mass transfer and hydrodynamic) at the reactor scale based on the finite element method, with the kinetics of heterogeneous grains population in aggregates structured: at reactor scale, for heat, hydrodynamic and mass transport problems, a finite element formulation was built. A classical way is followed to obtain weak formulations for each state variable: temperature, charge and partial pressures. At microscopic scale, the reaction fractional conversion α is followed for a representative population of grains. By finite difference it is possible to evaluate the reaction rate dα/dt for a given temperature and given partial pressures. This rate allows to evaluate heat and mass sources produced by the reaction. So, using these sources terms, microscopic reactions have an impact on the spatial and temporal evolution of the thermodynamic processes at the reactor scale. Inversely since it modifies the areic frequency of nucleation and the areic reactivity of growth, thermodynamic influences fractional conversion and reaction rate of the microscopic reaction.

Preview Presentation:
Presenter(s):
Loïc Favergeon
Once the content has been viewed and you have attested to it, you will be able to download and print a certificate for PDH credits. If you have already viewed this content, please click here to login.

Pressure Swing Adsorption: Design and Optimization for Pre-Combustion Carbon Capture
Pressure Swing Adsorption (PSA) is an efficient method for gas separation, and is a potential candidate for carbon dioxide (CO 2 ) capture from power plants...
Aminosilicone Carbon Capture Process Development
Liquid aminosilicone CO 2 capture solvents have been developed that have the potential to significantly reduce the cost of carbon capture from pulverized coal...