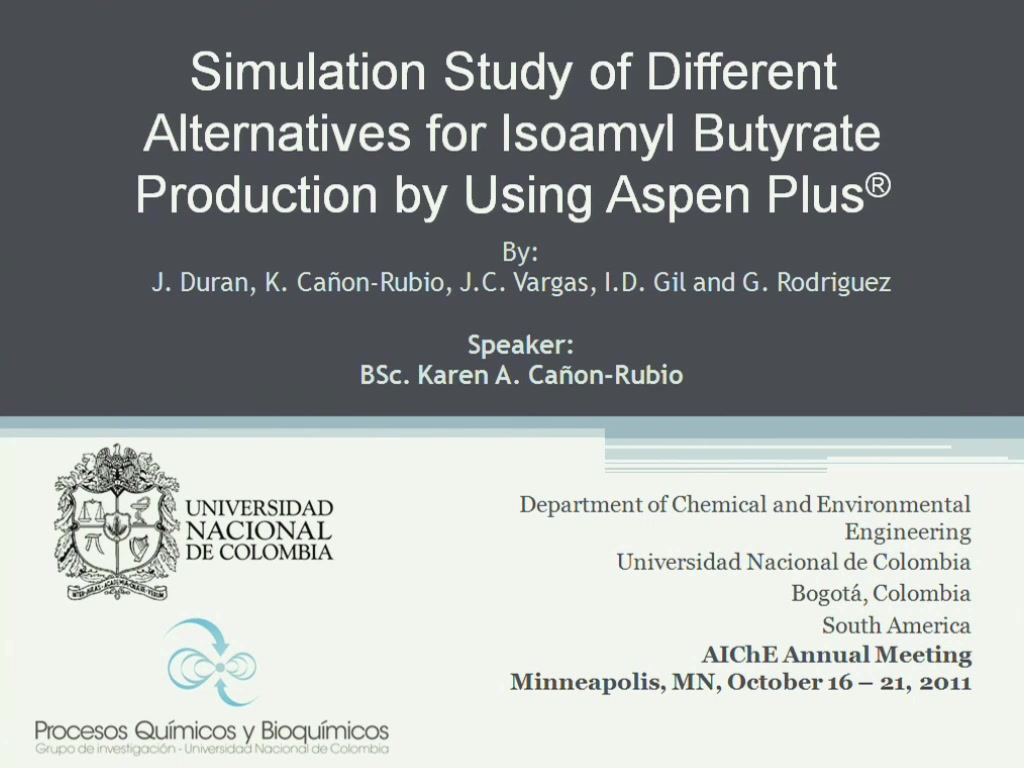 The Isoamyl butyrate is a value-added product widely used in fragrances and flavors, therefore its production can be interesting for this kind of industries and can be the basis for business approach. Otherwise, the production process may be included in the green chemical engineering field because the use of raw materials from renewable resources, for instance, isoamyl alcohol can be obtained from fusel oil, a well known by-product from ethanol production. This work presents the simulation and the analysis of the conventional scheme for ester production and the coupled reactor/column configurations. The total annual cost (TAC) has been used as a comparison and evaluation criterion to explore the alternatives of production and determine which one presents the best performance at a lower cost.

Due to the lack of experimental data on vapor-liquid equilibrium (VLE) of the isoamyl butyrate ? isoamyl alcohol, it was necessary to obtain experimentally those data. Vapor-liquid equilibrium data were measured at 101.3 kPa. A dynamic equilibrium apparatus was used for the measurements (Fischer Labodest VLE-602). Equilibrium data were fitted with UNIFAC and NRTL models, obtaining a maximum absolute error of 2.5%. Herrington area test was performed using some criteria reported at literature. Also, Van Ness test was used as modelling capability test for NRTL and UNIFAC models. Good thermodynamic consistency was found with both tests.

After obtaining reliable thermodynamic data, it was possible to begin an analysis of each scheme of production. The process simulation has been performed by using Aspen Plus®. UNIFAC and Peng-Robinson with Wong Sandler mixing rules were set as property methods. It was preferred to use Wong Sandler mixing rules over others because the benefits of extrapolation on the model to other pressures as reported in the literature. Operations where the isoamyl butyrate-isoamyl alcohol VLE is relevant for the design, such as distillation columns, were simulated by using parameters obtained from regressed model, however for the other operations, default UNIFAC parameters were used for modeling. Economic analysis includes the estimation of fixed and variable costs of the process by using equations and heuristics from literature. Coupled reactor/column resulted with the lower TAC using a base production of 200 000 kg/yr which is the average consumption of isoamyl butyrate in Colombia. It is expected that the results presented in this work will be the comparison criteria of a base study on reactive distillation process for this system.

Please Note: Members of the Process Development Division of AIChE are entitled to this content for free. Simply enter the 'promo code' PDCOD when you are checking out. Only AIChE members are entitled to join the Process Development Division. For more info please click here. click here
Preview Presentation:
Presenter(s):
Jairo A. Duran
Once the content has been viewed and you have attested to it, you will be able to download and print a certificate for PDH credits. If you have already viewed this content, please click here to login.