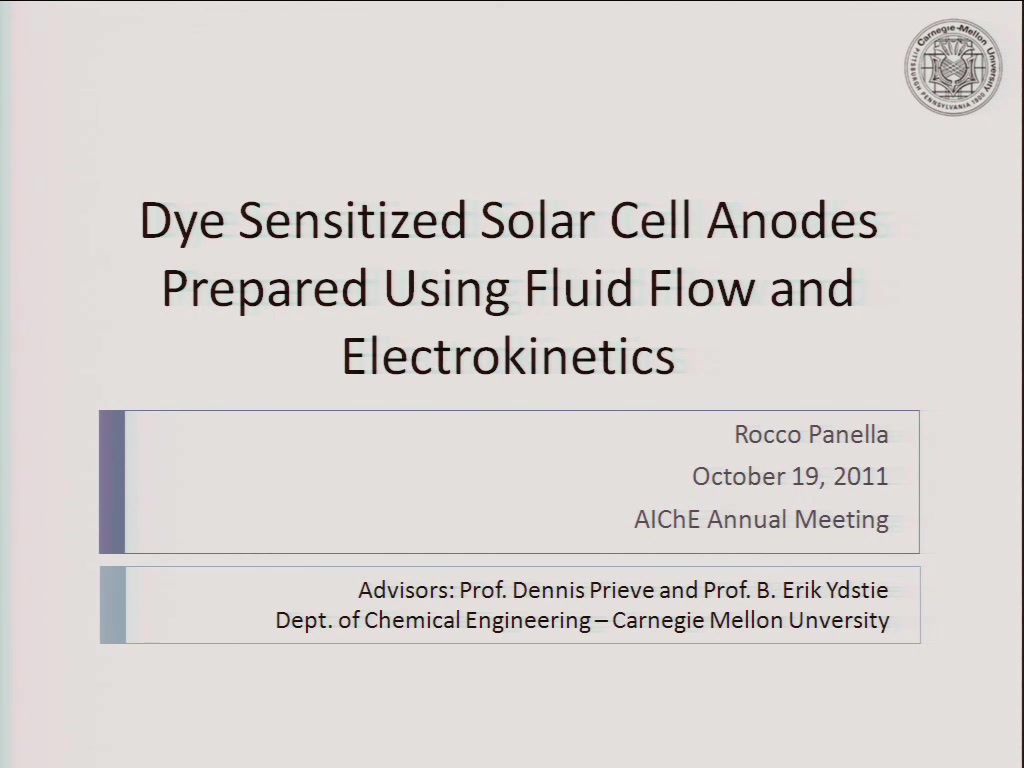 Dye-sensitized solar cells (DSSCs), while only having been designed about twenty years ago, are considered to be one of the most promising third-generation solar cell technologies among experts. One of the key features of DSSCs is a mesoporous, 10 micron layer of titania nanoparticles which acts as a high surface area scaffold for the application of a highly photoactive dye. The properties of this titania nanoparticle layer, such as its porosity, electrical interconnectivity, and resistance to cracking, are important for the performance of the solar cell as well as for their implications on large-scale manufacturing of this technology.

Using electrokinetics and fluid mechanics, we are designing a method to rapidly deposit titania nanoparticles from aqueous suspensions onto transparent conductive oxide (TCO) surfaces for use in DSSC anodes. Manipulating the pH and ionic strength of an aqueous solution makes it possible to control the surface potential of submerged oxide surfaces such as titania and doped tin oxide. By using pH values near 5.5, it is possible to create conditions where titania nanoparticles are stable and electrostatically opposed to each other in a dilute, aqueous suspension, but are attracted to tin oxide surfaces, including both tin-doped indium oxide (ITO) and fluorine-doped tin oxide (FTO). We can then use fluid flow such as that from a rotating disk or impinging jet to deliver nanoparticles adequately close to the surface such that they adhere via strong van der waals forces. For particles which are made in solution via oxidation and sol-gel processes, this technique offers the major advantage of never drying the particles, thus allowing them to remain un-aggregated until they deposit onto the surface.

We have shown that we can monitor particle deposition in situ by measuring the streaming potential of a surface using a rotating disk electrode apparatus. The measured differences in iso-electric point of titania nanoparticles and surfaces such as FTO and ITO shown in this work indicate that we should have control over the rate and extent of particle deposition. Currently, we have deposited titania nanoparticle layers which are several layers thick and consist of particles with diameters smaller than 10 nm; these tightly packed layers have applications as blocking layers to prevent unwanted shunts in dye solar cells. Improvements in the short-circuit current of DSSCs prepared using blocking layers applied in this fashion have been demonstrated. We also describe the potential for the scaling of a process based on fast, electrokinetic deposition to the size of specialty-coated glass production, which is recognized as a long-term goal for solar cell mass production.

Preview Presentation:
Presenter(s):
Rocco Panella
Once the content has been viewed and you have attested to it, you will be able to download and print a certificate for PDH credits. If you have already viewed this content, please click here to login.

Thermal Reduction of Magnetically Stabilized Ferrites Under Reduced Pressure
Oxidation of a metal (or metal oxide) by H 2 O and CO 2 followed by a regenerative high temperature thermal reduction of the resulting metal oxide is a...
Harnessing Applied Potential for Sunlight Driven CO2 Utilization
Escalating CO 2 emissions due to increasing fossil fuel consumption is generally acknowledged as one of the major contributors to global warming. Therefore,...