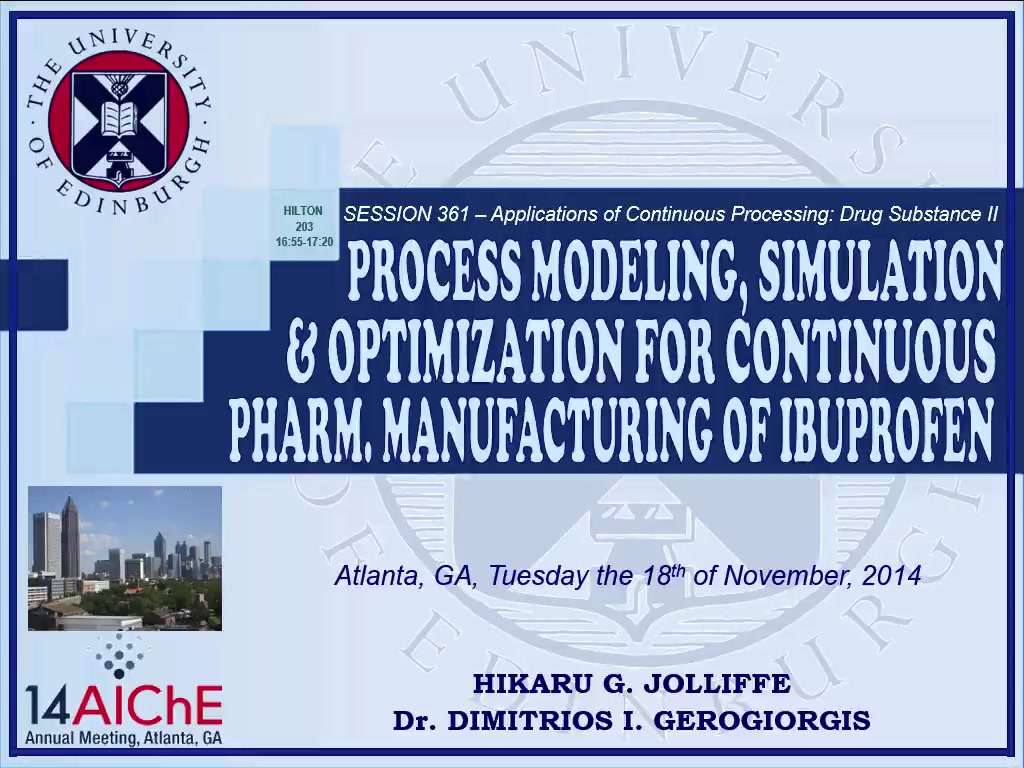 Pharmaceutical corporations face rapidly rising R&D as well as production costs.  Batch production processes are dominant in the pharmaceutical industry and have multiple advantages, including equipment flexibility, efficient high-fidelity quality control and the ability to recall specific batches; however, they suffer known disadvantages such as limited heat transfer and mixing scalability, and low operational asset efficiency.  Continuous Pharmaceutical Manufacturing (CPM) has a documented promise to suppress costs (Schaber et al., 2011) and foster profitability.  Continuous production techniques (Behr et al., 2004) can be easier to scale up and can be designed to be often more efficient in terms of both solvent and energy use (Kockmann et al., 2008). Therefore it is both timely and important to explore the expanding feasibility and applicability limits of this emerging technology, which has been repeatedly demonstrated (Mascia et al., 2013).

The literature has been extensively surveyed in order to identify a series of candidate Active Pharmaceutical Ingredients (API) suitable for CPM production. Ibuprofen (2-(4-isobutylphenyl)propanoic acid), the widely used non-steroidal anti-inflammatory drug, has emerged as an ideal candidate, because it is in high global demand and can provide a market share of appropriate size. Flowsheet synthesis and process modeling are vital for rapidly evaluating R&D potential evaluation. The flowsheet we have considered is based on a published organic synthesis pathway (Bogdan et al., 2009) and produces Ibuprofen using three plug flow reactors (PFRs) in series, followed by a final purification separation.  Kinetic and thermodynamic parameter estimation modelling has been employed in order to compute essential data for design and the PFRs have been designed based on reported conversions of feedstock and intermediate organic molecules. The theoretically computed PFR volumes are in good agreement with experimental prototypes constructed for the same organic synthesis reactions.

The development of a continuous final purification step after the third PFR is also essential.  The current state of the art relies on a batch process comprising 15 distinct steps in order to obtain Ibuprofen crystals at 99% purity.  To fully realise the benefits of CPM, a suitable continuous alternative is necessary and has been designed. Hexane is a promising solvent for separating Ibuprofen, and a high recovery has indeed been achieved. Plantwide economic optimization has thus been considered to explore and ensure the viability and profitability of the proposed design, which is most promising if installed in an existing production facility.

Preview Presentation:
Presenter(s):
Dimitrios I. Gerogiorgis
Once the content has been viewed and you have attested to it, you will be able to download and print a certificate for PDH credits. If you have already viewed this content, please click here to login.

AIChE Annual Meeting 2011 Recording Bundle - Quality by Design (QbD) in Pharmaceutical Discovery, Development, and Manufacturing
Get all 45 recordings for one low price. These papers, delivered during the 2011 AIChE Annual Meeting detail theoretical models and experimental studies on...
Fluidized Bed Methanol to Gasoline (MTG): A Reliable and Cost-Effective Solution for Production of Gasoline from Renewable Feedstocks
An overview of the process and technology innovations being made to a benchmark synthetic fuels process enabling the conversion of renewable feedstocks to a...