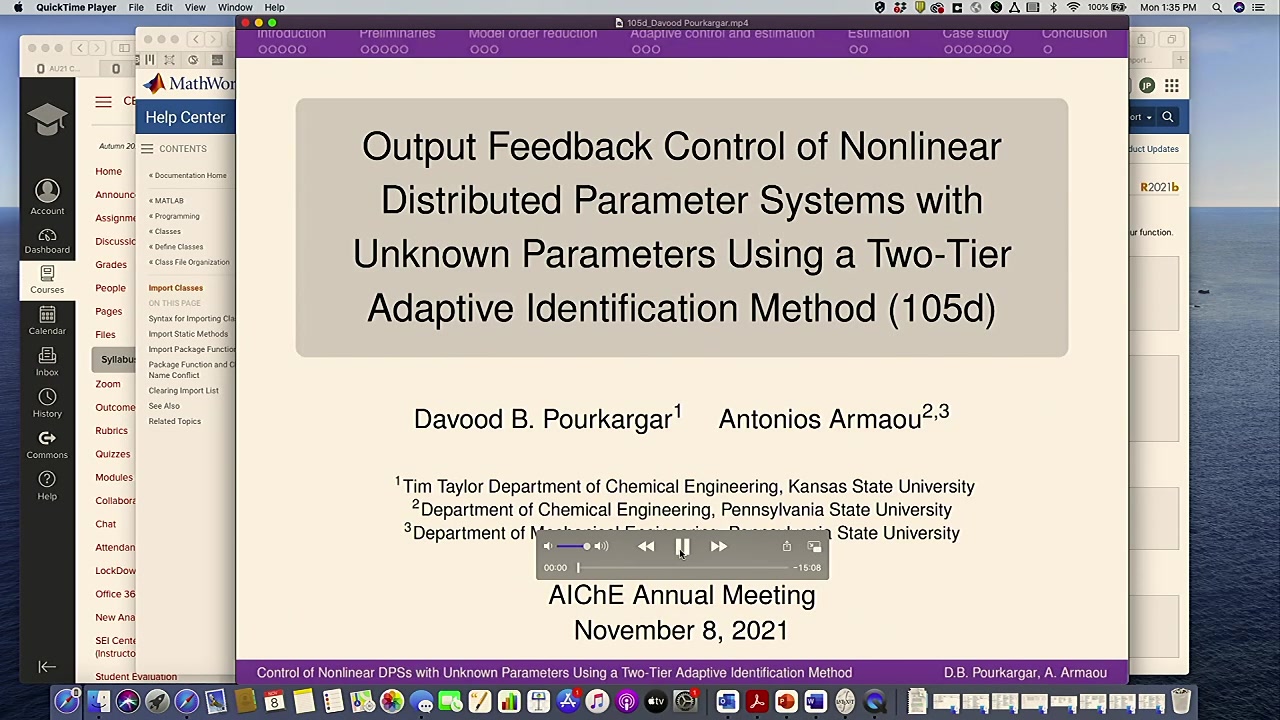 The estimation and control problems of nonlinear distributed parameter systems are challenging due to the nonlinear nature and spatiotemporal dependency of the system states [1-9]. Examples in chemical process and advanced materials manufacturing include packed-bed and fluidized-bed reactors, chemical vapor deposition, powder-bed laser printing, and fused filament fabrication. In this work, we develop a framework to address the regulation problem of distributed parameter systems with unknown parameters described by nonlinear dissipative partial differential equation (DPDE) systems. The infinite-dimensional model representation of such systems can be decomposed into two subsystems with a time-scale separation; a finite-dimensional subsystem that includes slow and possibly unstable modes of the system and a complemented infinite-dimensional subsystem that contains fast and stable modes. By exploiting such a separation, we can approximate the governing DPDEs by a finite set of ordinary differential equations that capture the dominant dynamics of the infinite-dimensional model. Such an approximation can then be employed as the basis for state estimation and control design.

A standard approach to obtain the approximated model is applying a weighted residual method to discretize the governing DPDEs. The most challenging part of such an approach is the computation of the optimal basis functions required by the weighted residual method, especially in the presence of unknown transport-reaction parameters. To resolve this fundamental issue, a learning-based approach is used to recursively compute the basis functions from the spatiotemporal data of the system's key states. As the number and shape of the resulting basis functions change by appearing new dynamics, the dimension and form of the approximated model change adaptively to capture the dominant dynamics. The resulting adaptive approximate reduced-order model is then used for an adaptive output feedback control design consisting of a dynamic observer to estimate the states of the reduced-order model, an adaptation law to estimate the unknown parameters, and a Lyapunov-based nonlinear controller to stabilize the dominant modes of the system dynamics. The temperature regulation problem in a catalytic reactor with unknown transport-reaction parameters is used as a case study to illustrate the application and computational advantages of the proposed two-tier adaptive identification and output feedback control strategy.

Preview Presentation:
Presenter(s):
Antonios Armaou
Davood Babaei Pourkargar
Once the content has been viewed and you have attested to it, you will be able to download and print a certificate for PDH credits. If you have already viewed this content, please click here to login.

Improving Profitability By Solving Crude and Fuel Blending Challenges
The global refining industry has faced constant change in recent years most significantly around the increased availability of opportunity crudes and stricter...
Key Information and Data to Inform Discussions about AIChE Institute Roles
This presentation will provide information and data that will inform the discussion about AIChE's institute role in SBE&S. Included will be key findings...