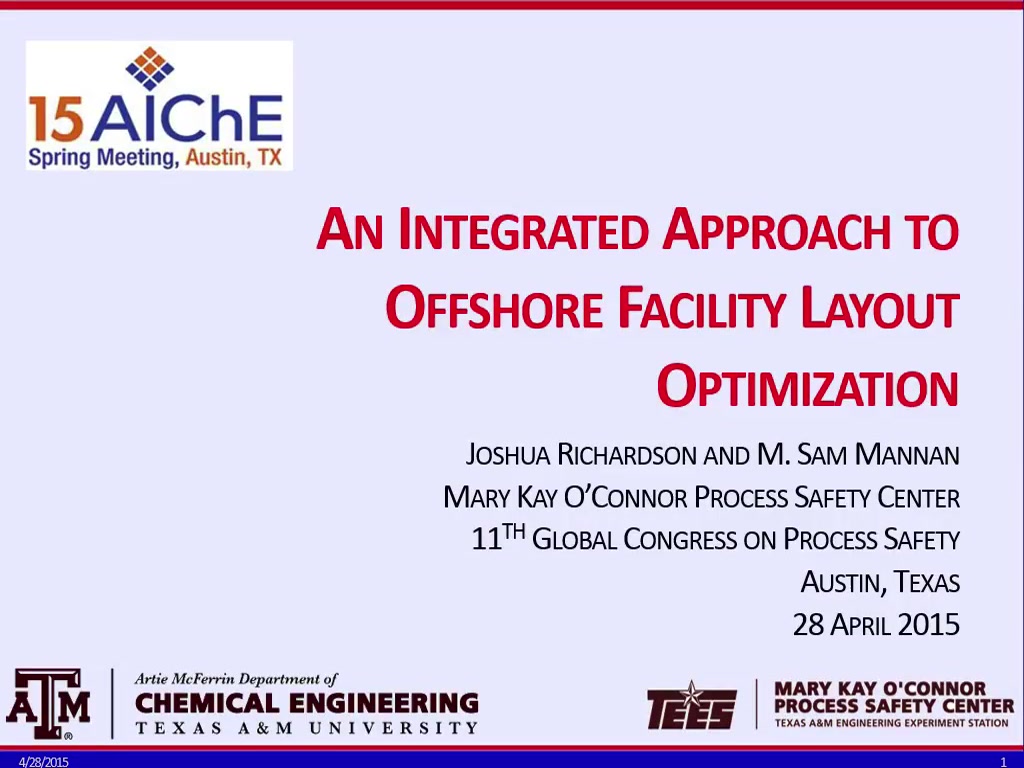 Facility siting and layout, whether onshore or offshore, is one of the key factors in the safety of a process operation. Fire, explosion, toxic release, as well as cost considerations drive the layout of onshore facilities, while offshore facilities present their own challenges when faced with the same hazards. Unfortunately in the offshore industry, spacing is many times not an option. Platforms are relatively small, compact, confined, and congested. Layout is more difficult and a fire or explosion event on a poorly laid out platform can cause the loss of utilities, destruction of mitigation systems, and a blockage of escape routes. This has contributed to two of the worst offshore incidents in history: Deepwater Horizon and Piper Alpha, where questionable layout decisions led to escalation of the disasters. However, the layout flaws that led to the escalation were not necessarily apparent at the time of design. The need for a more efficient and automated approach to facility siting of offshore operations is apparent.

A MINLP optimization model has been created that optimizes the layout of a set of sections with fixed footprint areas bound to a platform of a given size based on safety considerations due to fire and explosion. Process parameters are used to estimate the probability of an event as well as the magnitude of the possible impact on other sections, which can be weighted in importance in the objective. The magnitude of the impact is directly dependent on the spacing between the sections ? a larger spacing will lower the impact compared to a smaller one. The explosion overpressure and fire radiative flux calculations are based on impact correlations widely used in industry for layout evaluation.

Explosion modeling is done using an approximation to the TNO multi-energy method. This allows for the amount of energy in a section to be specified, as well as a blast strength level that is determined using TNO guidelines based on the amount of congestion and confinement in the area. In this way, different sections may have different magnitudes explosion hazards or no hazard at all. The explosion overpressure from one section on another is calculated and then converted into a probit value, which can be converted into a probability of destruction of a section.

Fire modeling is used to ascertain the adequacy of layout of both sections and muster points that the sections are assigned to. Modeling is done using three different correlations for different fire scenarios: pool fire, fireball, and jet fire. The process parameters that are specified can be used to calculate the emission of heat from each scenario and the effect of the heat flux on points of interest between the section and its muster point which can be converted to a probability of failure to escape in the case of a fire event.

Two case studies are presented to demonstrate the applicability of the model: the first a total layout optimization for the Piper Alpha platform, and the second an assignment of muster points to sections for an existing layout. It is shown that the model is able to improve layouts dramatically in the case of a poor layout, noticeably in the case of an adequate layout, and can be practically used to assign muster points to sections and determine which route should be taken by personnel trying to escape. It also implicitly corrects common problems associated with tradeoffs that are often found in offshore platforms.

Preview Presentation:
Presenter(s):
Joshua Richardson
Once the content has been viewed and you have attested to it, you will be able to download and print a certificate for PDH credits. If you have already viewed this content, please click here to login.