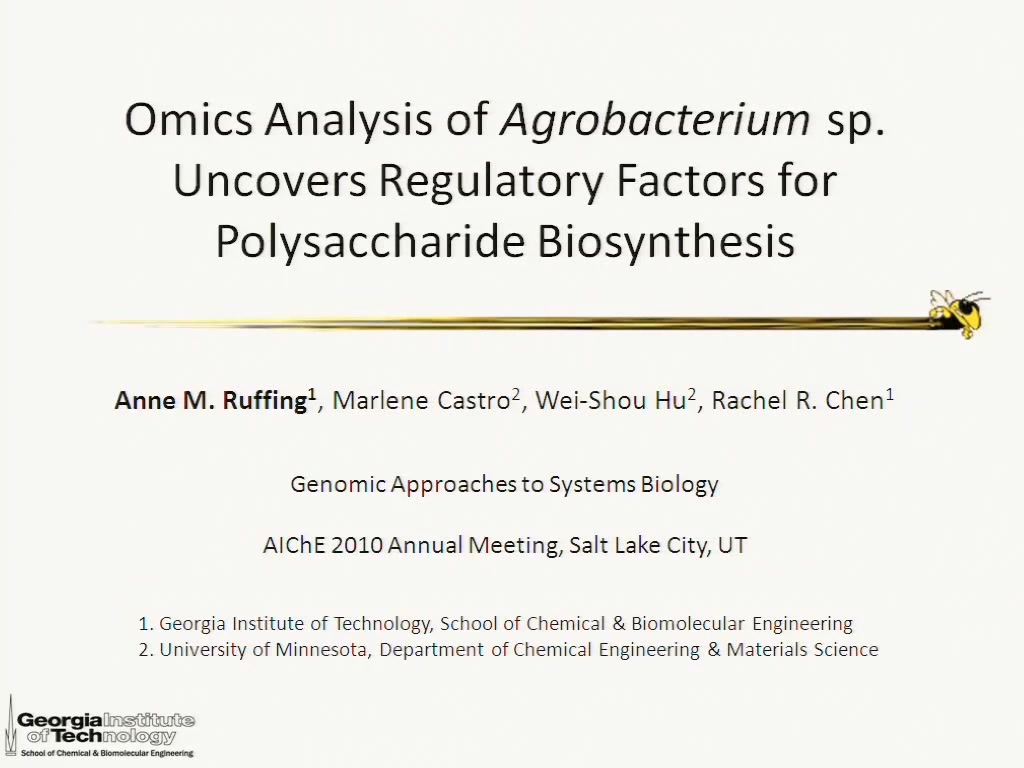 Microbial polysaccharides are primary cellular components and integral to many cellular functions including cell adhesion, biofilm formation, pathogenesis, and protection from the environment. Despite their ubiquity and functional importance, the regulation of polysaccharide biosynthesis remains largely unknown. A polysaccharide-producing Agrobacterium sp. was investigated to gain insight into the regulatory factors governing polysaccharide biosynthesis. Agrobacterium sp. ATCC 31749 produces a ß1,3-glucan polymer known as curdlan, which has applications in a wide-range of industries including food, cosmetics, materials, and medical. While Agrobacterium sp. is used industrially to produce curdlan for these commercial applications, very little is known about the genetics and regulatory processes of this microorganism. This study utilizes genomics and transcriptomics to analyze Agrobacterium sp. ATCC 31749 at the systems level, revealing a complex, multi-faceted regulatory mechanism for curdlan biosynthesis. Omics tools provide an avenue for genome-wide analysis of polysaccharide biosynthesis. The genome of ATCC 31749 was sequenced using the Genome Sequencer FLX System from 454 Life Science, yielding a draft genome of 5.4 Mb with 5,585 predicted genes. Subsequently, the annotated draft genome sequence was used to design a custom DNA microarray from Agilent Technologies. Analyzing gene expression levels in Agrobacterium sp. identified 985 genes significantly up-regulated and 1,471 significantly down-regulated during curdlan production. The large number of differentially expressed genes can be attributed to the phase change accompanying the initiation of curdlan biosynthesis. Like many other polysaccharides, curdlan is only produced under stress conditions (nitrogen-limitation), when the cell transitions into the stationary phase of the growth cycle. To pinpoint the genes specifically involved in the regulation of curdlan biosynthesis, differentially expressed genes related to three functional categories were selected for further analysis: 1) nitrogen-limited regulation, 2) energy production, and 3) GTP-derived second messengers. Gene knockout of targets identified from the transcriptome analysis showed four factors to be important for curdlan biosynthesis: the nitrogen signaling cascade, polyphosphate, (p)ppGpp, and c-di-GMP. As expected, the genes of the nitrogen signaling cascade affected curdlan production, but this regulation was shown to be mediated in a rare, RpoN-independent manner. Energy storage in the form of polyphosphate was suspected to be an important energy resource for curdlan production. Gene knockout of polyphosphate-degrading genes confirmed the importance of polyphosphate but also suggested two possible mechanisms of polyphosphate-associated regulation. Lastly, the GTP-derived second messengers, (p)ppGpp and c-di-GMP, were found to affect curdlan biosynthesis and may act as transcriptional, translation, or allosteric regulators. The experimental results of this study will be discussed in light of previously characterized regulatory mechanisms for other microorganisms to provide a global understanding of polysaccharide regulation. Through using a systems approach to study Agrobacterium sp. ATCC 31749, this work uncovered multiple regulatory factors involved in curdlan biosynthesis. Moreover, the genes and factors identified in this study include regulatory elements common to many polysaccharide-producing microbes, and as such, these regulatory factors and mechanisms may be conserved across microbial species. Further investigation of these regulatory factors may be the key to understanding microbial polysaccharide regulation.

Preview Presentation:
Presenter(s):
Anne Ruffing
Once the content has been viewed and you have attested to it, you will be able to download and print a certificate for PDH credits. If you have already viewed this content, please click here to login.