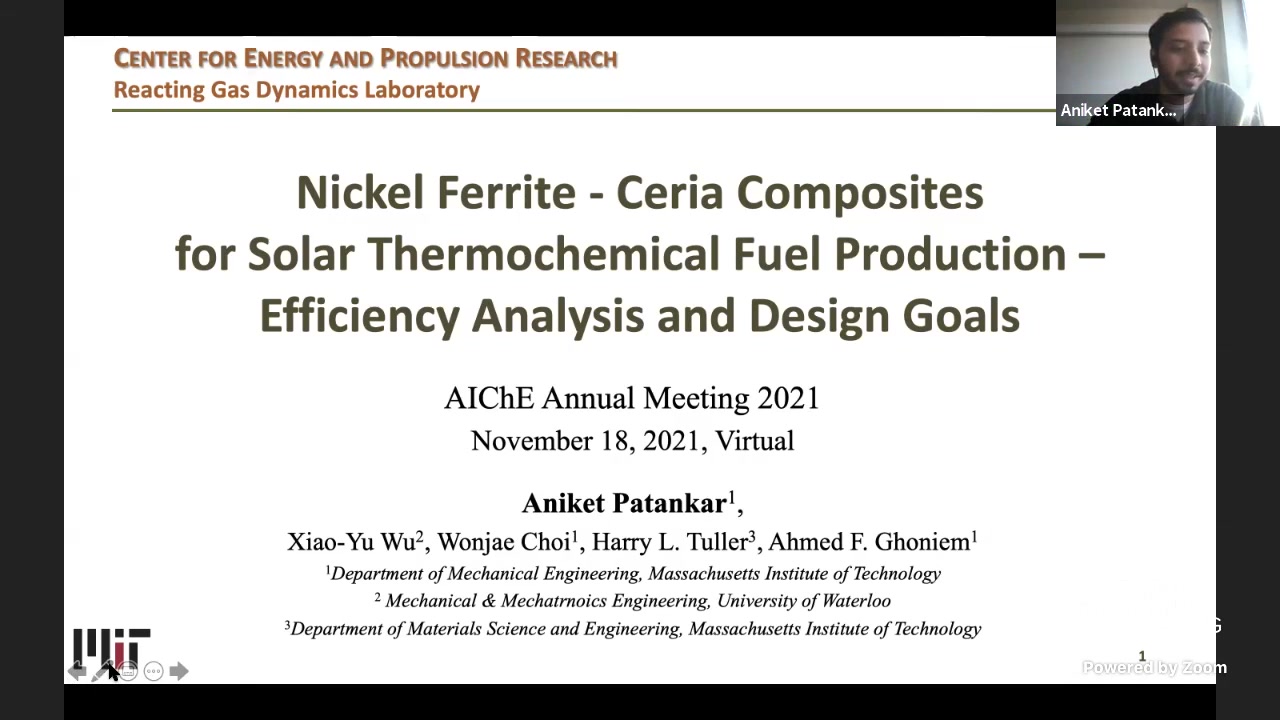 Thermochemical redox cycles are a promising pathway for converting solar thermal energy directly to energy carriers like syngas and liquid fuels. Significant efficiency improvements and price reduction are needed before this technology can produce hydrogen at less than $3/kg-H2 â€“ a key price target for making green fuels viable. Along with reactor design, identifying better redox materials can have the greatest impact on cycle efficiency. Several redox materials have been investigated in recent years, including doped and undoped ceria, perovskites, ferrites, and multi-phase or composite materials (for example, ceria-perovskite composites1). Recent system-level efficiency analyses have shown that undoped ceria is generally more efficient at converting heat to fuels, as compared to zirconia-doped ceria (CZO) and most reported perovskites2,3. Even though the CZO and perovskites have higher gravimetric oxygen carrying capacity, they are more efficient than ceria only in a very limited set of operating conditions like isothermal cycling (which is unlikely to be the most efficient mode of operation4). The low efficiency of CZO and perovskites is predominantly due to their low conversion during the water-splitting step. This necessitates circulation of large amounts of unreacted steam, and incurs heating and separation energy penalties.

Ferrites can be thermodynamically better suited for fuel production than ceria, but they face other challenges in terms of sintering and deactivation, and low mass diffusivity leading to slow water-splitting kinetics. Some of these problems can be alleviated by using metal doped ferrites (of the form MxFe3-xO4) and supporting them on refractory materials like zirconia5. In the present work, we analyze the thermochemical heat-to-fuel efficiency of the aforementioned material classes and compare them to the efficiency of nickel ferrite-ceria composites. To the best of our knowledge, the latter material has not been considered for thermochemical fuel production before. We identify operating conditions under these ferrite composites can exceed the maximum efficiency of ceria, and in doing so, identify material design goals that these composites must meet.

In this talk we will present our system-level efficiency model for calculating heat-to-fuel efficiency of metal oxides and their composites. Such models depend heavily on the characteristics of the reactor system. The present model is based on the novel â€˜Reactor Trainâ€™ system developed by the author and presented elsewhere6. The system employs solid and gas-phase heat recovery, and uses waste heat to produce electricity in a power cycle. Vacuum is used to enhance thermal reduction. Thermodynamic equilibrium and realistic mechanical pump efficiencies are used to evaluate pumping and gas separation work. Equilibrium is used to determine the quantity of steam needed to oxidize the redox material, following the â€˜fixed bed flowâ€™ model3,7. Using kinetic models for water-splitting would give a more realistic result. However, they are not employed here because accurate models are not available for all materials considered.

The reduction temperature is varied between 1400-1500°C, and oxidation temperature, oxidation extent and reduction pressure are obtained by optimizing for heat-to-fuel efficiency. Oxidation temperature is constrained to be above 700°C to maintain reasonably fast water-splitting kinetics. The materials considered are CeO2 (ceria), Ce0.85Zr0.15O2 (CZO), NiFe2O4 (Nickel Ferrite, unsupported), NiFe2O4/ZrO2 (Nickel Ferrite, supported on zirconia) and NiFe2O4/CeO2 (Nickel Ferrite-ceria composite). The latter two are composite materials with pure phases - i.e. the formation of solution due to cationic exchange is ignored. This is supported by the experiments of Kodama and co-workers, who found no dissolution of iron into the monoclinic zirconia lattice8. On the other hand, iron was found to dissolve in cubic Yttria-stabilized zirconia9. This system is not considered in the present study because of a lack of thermodynamic data.

We propose nickel ferrite-ceria composites as a means of combining the high oxygen carrying capacity of nickel ferrite with the high-temperature stability and rapid water-splitting kinetics of ceria. Recently, perovskite-ceria composited have been investigated as a means of speeding up the water-splitting step in perovskites1. Although faster reactions were observed, the rate was still much slower than ceria. Unlike those perovskites, nickel ferrites do not suffer from low steam conversion at equilibrium, but they must be supported on refractory supports to control agglomeration and particle growth. Zirconia supports have been successfully employed for this purpose5. However, zirconia does not participate in redox reactions, and has a low oxygen diffusivity. On the other hand, ceria can serve as an â€œactive supportâ€ by participating in redox reactions and contributing to the overall oxygen carrying capacity of the composite. Ceria also has a high oxygen diffusivity, which can be further enhanced with acceptor doping, albeit with some effect on oxygen carrying capacity. Recently, gadolinia-doped ceria was demonstrated as an attractive â€œactive supportâ€ material for hematite in chemical looping cycles10.

The Nickel ferrite-ceria composite with 50 wt% ferrite has an optimum efficiency of 33% at a reduction temperature of 1500°C and oxidation temperature of 700°C. Decreasing the ferrite mass fraction to 20% reduces the optimum efficiency to 32%. Both these values exceed the base case efficiency of ceria (see fig. 1). However, this advantage is lost when the composite is reduced 1400°C. The composite also becomes less efficient when the oxidation temperature is increased to 1000°C. At this temperature, the water-splitting reaction becomes thermodynamically less favorable. The variation of heat-to-fuel efficiency with oxidation temperature is shown in fig. 2. However, there is reason to believe that the nickel ferrite-ceria composite can split water at low temperatures - pure ceria was observed to oxidize rapidly in steam at temperatures as low as 600°C 5. Moreover, the composite material is less sensitive to a drop in solid heat recovery effectiveness than ceria, as shown in fig. 1. This is because of the waste heat recovery system that produces electricity, and the favorable thermodynamics of Nickel ferrite.

We thus conclude that although nickel ferrite has better thermodynamic performance, practical considerations make it unattractive compared to ceria, which is the current state-of-the-art material. In view of this, nickel ferrite-ceria composites emerge as promising redox materials with the potential to surpass ceria. However, they must be designed to withstand a reduction temperature of 1500Â°C, and achieve reasonably fast water-splitting below 800Â°C. Their efficiency can be increased further by increasing the weight fraction of ferrite in the composite, if this can be achieved without negatively impacting material stability and water-splitting kinetics. Experimental work on the synthesis, characterization and thermochemical testing of these composites is ongoing. 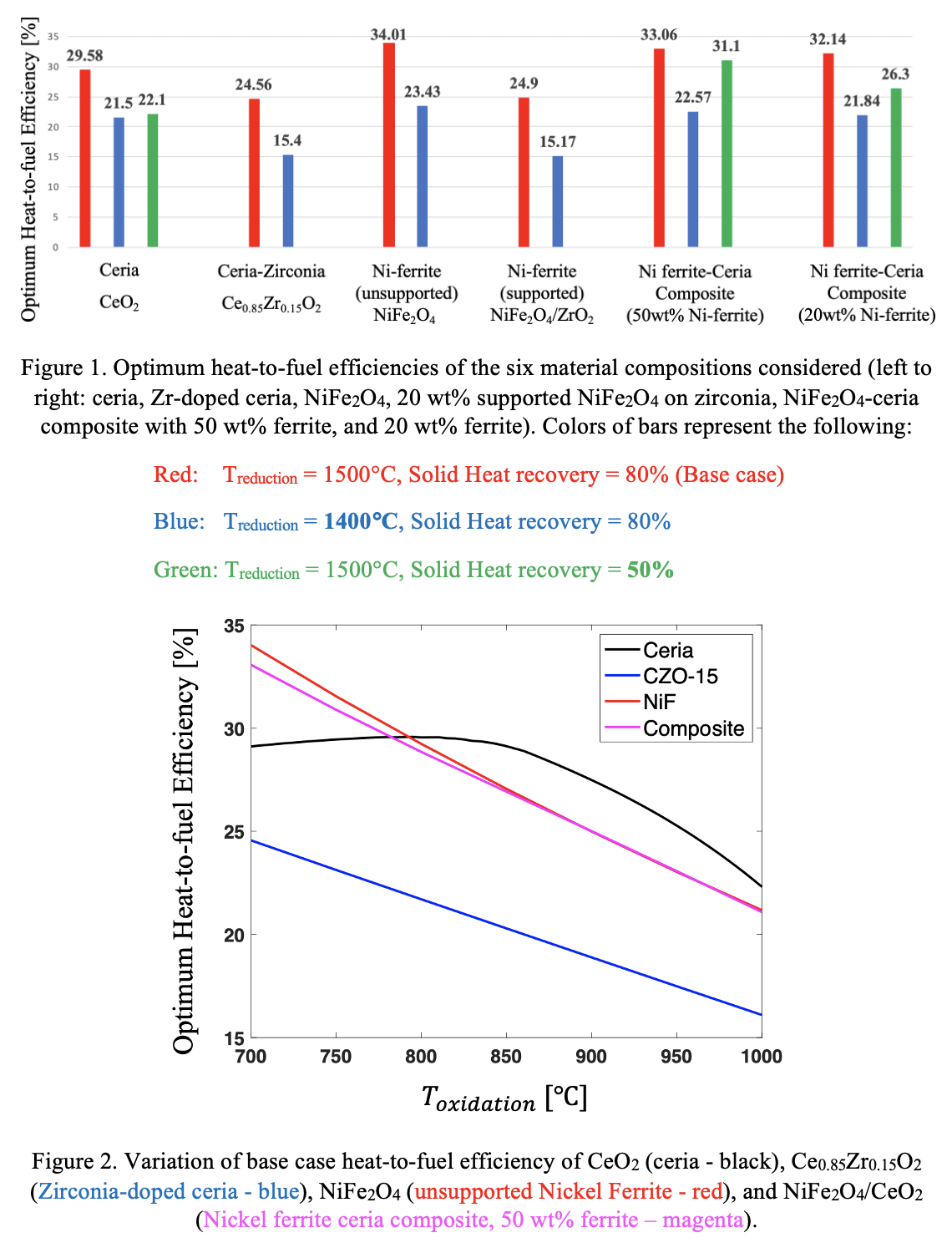 Preview Presentation:
Presenter(s):
Wonjae Choi
Ahmed F. Ghoniem
Aniket Patankar
Harrry Tuller
Xiaoyu Wu
Once the content has been viewed and you have attested to it, you will be able to download and print a certificate for PDH credits. If you have already viewed this content, please click here to login.

Invited Talk: Screening and Characterization of Reduction/Oxidation-Active Reactions of Mixed Ionic-Electronic Conducting Materials for Air Separation
An investigation was performed on the impact of A- and B-site substitution on SrFeO 3-Î´ reduction/oxidation (redox) extents. SrFeO 3-Î...
Theoretical Insights into the Heterogeneous Hydroformylation of Ethylene on Atomically Dispersed Rh-Oxide Promoter Pairs on ?-Al2O3 Support
Atomically dispersed late-transition state metals on oxide supports have emerged as a new frontier in catalysis as they combine the advantages of both...