Multiscale Analysis for Power-to-Gas-to-Power Facilities. Technical and Social Issues of Substituting Base Load 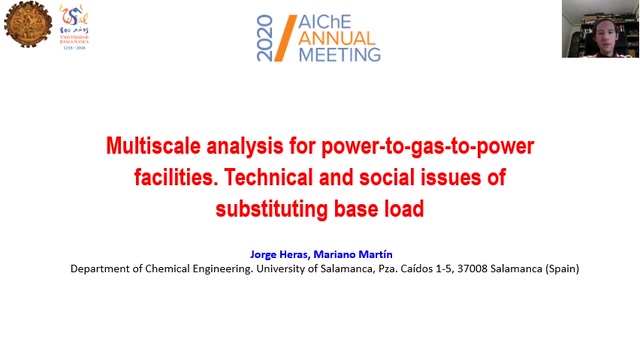 Solar and wind can easily provide the worldâ€™s energy demand. However, the variability of both sources makes it difficult to use them to provide base load, where nuclear and coal have been the resources of choice (Simla and Stanek, 2020). In the transition towards a more sustainable energy production sector, the development of technologies for the storage of wind and solar energy to be used at demand are being the focus of the research (Johlas er al, 2020). Six major technologies are considered for energy storage, chemical storage, electrochemical technologies, electrical systems, mechanical systems, and thermal storage and thermodynamic cycles (Matos et al., 2018). The selection of the technology depends on the purpose and capacity of the storage as well as the energy source. Power to gas is typically suited for large power storage such as the case of substituting the base load that so far is provided by the coal and nuclear power plants .The expected future hydrogen economy and the possibilities of using it for power (Gahleitner 2013) or synthesis (Davis and Martin, 2014) have developed electrolyser technology that is capable of responding to the variability of energy sources, reducing the cost of renewable hydrogen (Proost, 2019). However, a number of challenges must be addressed in terms of power harvesting, storage and power production.

A multiscale analysis is developed to evaluate the feasibility of storing renewable based hydrogen in the form of metal hydrides, and its further use in fuel cells to produce power. The renewable power to power ratio is computed at process level, where water splitting, oxygen and hydrogen production and purification, metal hydride production and decomposition and hydrogen use in a fuel cell are considered. Next, a macroscopic supply chain study is performed to identify the solar and wind energy harvesting technology and the region to produce the power required to later generate electricity that substitutes current base load in a region. The two problems are is modelled and optimized using a mathematical approach. The case study of Spain is considered where coal facilities are closing down in June 2020. Economic and social aspects are considered for the allocation of not only PV panels and wind turbines, but also the new power facilities aiming at mitigating the impact of the energy transition in the regions affected and helping develop the economy of the entire country.

The production of power from MgH2 is advantageous due to the decomposition of water in the production of the MgH2 so that the yield to power of the facility is above 1 at the cost of further need to process MgO to recover Mg via Carboreduction. Solar panels are to be installed to the South-East while the distribution of wind turbines is divided into that same region and the north of the country. However, aiming at job generation or GDP growth, alternative solutions are found. Multiobjective optimization is the way to find trade-offs. The power production cost for the system results in a competitive value of 0.084â‚¬/kWh, but the investment required adds up to 13000 â‚¬/kW, a high value compared to current non sustainable technologies.

Preview Presentation:
Presenter(s):
Jorge Heras
Mariano Martin
Once the content has been viewed and you have attested to it, you will be able to download and print a certificate for PDH credits. If you have already viewed this content, please click here to login.