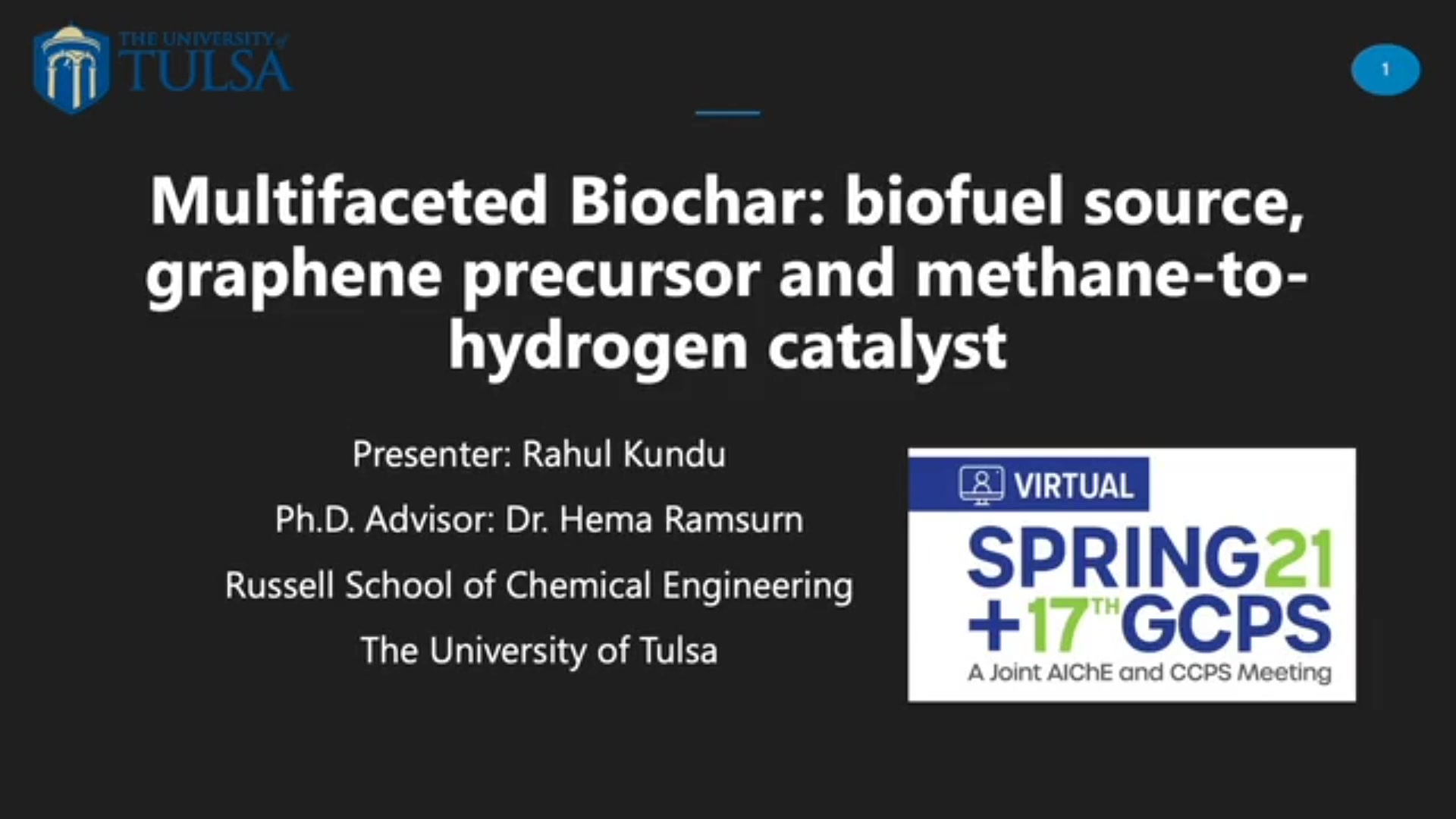 Overview
Fossil fuels have a finite reserve and if other carbon sources are not explored, our future global energy demands will not be met. Biomass represents a viable solution due to its abundance and accessibility. Although various techniques, such as pyrolysis and hydrothermal liquefaction and gasification, have been explored to convert biomass to biofuels, there are various challenges associated with these methods. One of the main problems is the formation of biochar and tar as byproducts which reduce the overall conversion of biomass to value-added products. To make the bio-refinery concept more sustainable, any byproduct like char must be converted to valuable products such as biofuel and/or other carbon-based materials. Therefore, my research is focused on the synthesis of value-added products from biochar obtained by hydrothermal carbonization of biomass model compounds (cellulose and lignin). The main advantage of studying biomass model compounds is to better understand their behavior separately as cellulose and lignin are structurally different and consequently translate that to biomass. In my research, I prepared biochar by hydrothermal carbonization in a batch reactor (220-300oC and 3.5-10.3 MPa). Using this biochar as a raw material, I have worked on synthesizing three different products: (a) biofuel, (b) carbon-based nanomaterial (graphene) on metals, and (c) carbon encapsulated iron nanomaterials for methane to hydrogen conversion. During my research I have designed my experimental set-up and gained experience in various analytical instruments including GC-MS, FTIR, Raman Spectroscopy, BET surface area analysis, TEM, XPS and SEM.

Research Experience
For the first part of my research, I used biochar as source to produce biofuel using tetralin as a hydrogen donor solvent at 400oC. I observed that the conversion of cellulose biochar was higher than lignin biochar because cellulose and lignin are structurally different, and lignin is harder to breakdown. Using analytical techniques such as FTIR and GC-MS, I was able to understand and postulate a mechanism for biochar dissolution in tetralin. I concluded that the dissolution of biochar was higher when the C/O of biochar was low and in the presence of biocrude (produced during hydrothermal carbonization). Further, I studied the kinetics of cellulose biochar dissolution where the products formed at various temperatures during the heating step of the dissolution process were analyzed and the major components in the products such as naphthalene (a byproduct from tetralin), levulinic acid (obtained from cellulose) etc. were quantified using GC-MS to understand the role of tetralin during dissolution. I observed that biochar dissolution is a two-step process in the heating stage where first the unconverted biomass in the biochar decomposed followed by the dissolution of biochar. Based on the experimental data, I proposed a new temperature dependent kinetic model where the activation energies were evaluated by non-linear regression. Since, all the conversion occurred during the heating stage of dissolution reaction, the activation energies were evaluated in the heating stage where the rate constant was function of temperature according to Arrhenius equation.
In recent years, graphene, a carbon-based nanomaterial has gained popularity among researchers. Graphene has been called a â€œwonder materialâ€ due to its unique properties. It was discovered by Dr. Novoselov and Dr. Geim in 2004 who won the Nobel prize in 2010. Graphene is a single layer of carbon (sp2) which could be obtained by exfoliation of graphite. It has the potential to be used in biosensors to detect disease like cancer, in microprocessors, in batteries etc. To produce high purity graphene, chemical vapor deposition (CVD) has been used to produce flakes (up to 100 Î¼m) of graphene on copper. Although CVD produces high purity graphene, this method requires greenhouse gas like methane as a source of carbon along with H2 (flammable) at very high temperature. Also, in most cases CVD requires vacuum in the reactor. These constraints make the process expensive and dangerous. Therefore, to mitigate these issues, I worked on developing a process to use biochar as a source of carbon to produce few-layer graphene on metal foils at atmospheric pressure which does not involve the use of hydrocarbon gas and hydrogen. This makes the process simpler, safer, environment friendly and most importantly less expensive and scalable. While working on this project, I have learned how to use various analytical techniques to characterize a nanomaterial such as scanning electron microscopy (SEM with Energy Dispersive X-Ray Spectroscopy), X-Ray photoelectron spectroscopy (XPS), Raman spectroscopy and X-Ray Diffraction (XRD). The Raman spectroscopy analysis revealed that the presence of the few-layer graphene on all the foils where the 2D/G ratio was less than 1. XPS showed over 80% purity (sp2 carbon) on the surface of the foil. This innovative process resulted in a patent for which I am one of the inventors (patentâ€™s PCT publication number: WO2020/086841). I helped in tailoring our scientific invention into legal terms by working together with my advisor and our legal and IP team. This innovation led me to participate in the i2e Love's Entrepreneur's Cup Business Competition where I teamed up with 2 students from University of Tulsa business school and competed against 30+ teams. Our team won the interview round and was among the 6 selected teams which qualified for the finals. In this competition, we formulated a business plan to produce graphene using our new process mentioned in large scale.
Industrial and technological developments have resulted in rapid increase in the rate of global energy consumption with the energy demand expected to increase to 33% by 2035. Fossil fuel resources are the dominant source of energy and during 2018, the oil demand grew by 1.5% while that of natural gas grew by 5.3% which is the fastest rate of growth since 1984. Due to the increased use of fossil fuels, the amount of carbon emissions has grown by 2%, the highest in the past seven years. This also led to an increase in emission of greenhouse gases (GHGs) like CO2, NOx and SOx which contribute to climate change. Unfortunately, with the current technologies, an efficient and economical route for utilizing renewables including solar, bio and wind as a source for large scale commercial energy production is not yet available. This gives significant scope for hydrogen, a clean source of fuel to be the future source of energy. Combustion of hydrogen produces only water and advances in hydrogen fuel cell technology can significantly decrease the GHG emissions. Compared to liquid hydrocarbons (13.1 KWh/kg), hydrogen (39.4 KWh/kg) can produce three times higher chemical energy per unit mass. The thermal decomposition of methane is the only single step process which converts methane to hydrogen without producing COx. Therefore, I am currently working on synthesizing biochar-based carbon encapsulated nano sized metal (Fe) catalyst from biochar to produce hydrogen from methane in a lab scale continuous flow reactor system. Characterization techniques such as XRD (to study the crystalline structure of the catalyst), BET surface area (to determine the surface area per gram using N2), SEM, HRTEM (high resolution transmission electron microscopy) etc. are being used to study the synthesized catalysts. The catalyst is then used in the conversion of methane to hydrogen in a continuous flow reactor.

Teaching and Mentoring Experience
Apart from my research experience, I was also a teaching assistant from August 2017 through May 2020. My responsibilities included managing undergraduate chemical engineering laboratory and grading homework and quizzes (fluid mechanics, heat transfer and thermodynamics). In the undergraduate lab, I assisted students in performing laboratory experiments related to enzyme kinetics, composition analysis,
bomb calorimeter, distillation, packed tower, viscometer, and pump performance. I also had the opportunity to mentor undergraduate and high school researchers.

Preview Presentation:
Presenter(s):
Rahul Kundu
Hema Ramsurn
Once the content has been viewed and you have attested to it, you will be able to download and print a certificate for PDH credits. If you have already viewed this content, please click here to login.

Comparative Reaction Kinetics of Acid Hydrolysis of Plant Biomass and Algae Biomass
The current vision of biomass (e.g. plant, algae) conversion technologies is focused on developing the reactive intermediates platform for biofuels and...
Designing Sustainable Options for Bioenergy Crops
Currently, the complexity and scale dependency of land-use decisions and their impacts are not understood, defined, or described with adequate clarity to...