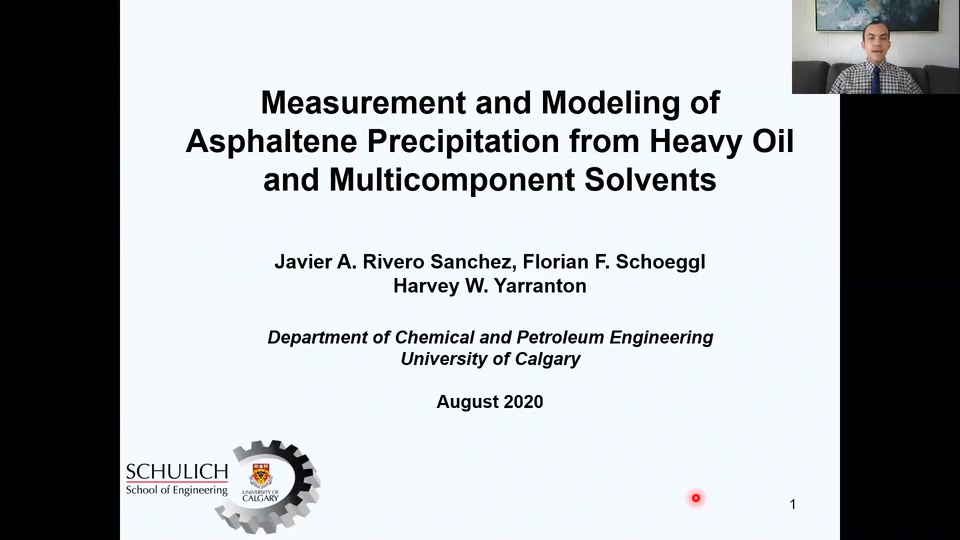 Hydrocarbon solvents are used in the production and processing of heavy oil and oil sands bitumen; for example, in solvent assisted recovery schemes, partial upgrading processes, and dilution for pipeline transportation. In some cases, mixing heavy oil and a particular solvent, such as an n-alkane, can trigger asphaltene precipitation. Asphaltenes are the heaviest, most polar fraction, and least soluble fraction of a crude oil. Asphaltene precipitation may be triggered deliberately in applications such as solvent deasphalting or unintentionally due to temperature, pressure or composition changes for example when heavy oil is blended with other petroleum fluids. In either case, it is critical to identify the condition at which asphaltenes start precipitating (onset) and the amount of precipitation relative to feed bitumen (yield).

Asphaltene precipitation yields at ambient conditions were measured gravimetrically in test tubes. Asphaltene onsets and yields at elevated temperature and pressure were measured in a high pressure microscope and a blind cell apparatus, respectively. The onsets were detected visually from titrations of heavy oil with the given solvent. The asphaltene yields were determined from a material balance based on the known feed composition and the measured composition of the light solvent-rich phase.

The data were modeled using the Modified Regular Solution (MRS) approach. This approach has been successfully applied to model asphaltene precipitation from bitumen diluted with pure solvents but has not yet been applied to mixed solvents. The model requires the molecular weight, density, and solubility parameter of each component or pseudo-component in the mixture. The bitumen was characterized into pseudo-components corresponding to SARA fractions. The saturates, aromatics, and resins were each represented with a single pseudo-component. The asphaltenes were divided into 30 pseudo-components based on a Gamma distribution of their molecular weight. The properties of the pseudo-components were set using previously established average values or existing correlations. The minimum and maximum solubility parameter of the asphaltenes were tuned to match the precipitation data from the bitumen diluted with n-heptane.

It was found necessary to introduce a binary interaction parameter (BIP) between the asphaltenes and the solvents to match the precipitation data from the mixed hydrocarbon solvents. The BIP for all n-alkanes were set to zero and the BIP with cyclohexane and toluene were tuned to match the data for binary mixtures. The model with the tuned BIP matched the yield data from ternary mixtures with an average deviation of less than 1.8 wt% for each mixture. In addition, a methodology is proposed to characterize petroleum derived solvents based on their GC assays in order to predict their molecular weight, density, and solubility parameters. The methodology is tested against their measured densities and the solubility parameters determined by fitting the MRS model to onset and yield data collected for bitumen diluted with these solvents.

Preview Presentation:
Presenter(s):
Javier A. Dittmar
Paul Dittmar
Javier A. Rivero Sanchez
Paul Rivero Sanchez
Florian F. Schoeggl
Harvey W. Uscanga
Citlari Uscanga
Harvey W. Yarranton
Citlari Yarranton
Once the content has been viewed and you have attested to it, you will be able to download and print a certificate for PDH credits. If you have already viewed this content, please click here to login.

Practical Enhanced Oil and Gas Recovery (EOR/EGR) for Unconventional Wells and Reservoirs - a Next Generation Huff-and-Puff Treatment Combining Gas with Nanoparticles
Unconventional reservoirs unlocked through the combination of horizontal drilling and fracturing have revolutionized the exploration and production of...
Can Transient Data Help to Speed up Kinetic Model Construction in Hydroprocessing?
INTRODUCTION Kinetic model is a powerful tool for the adequate design and simulation of chemical processes. It is usually developed based on the steady-state...