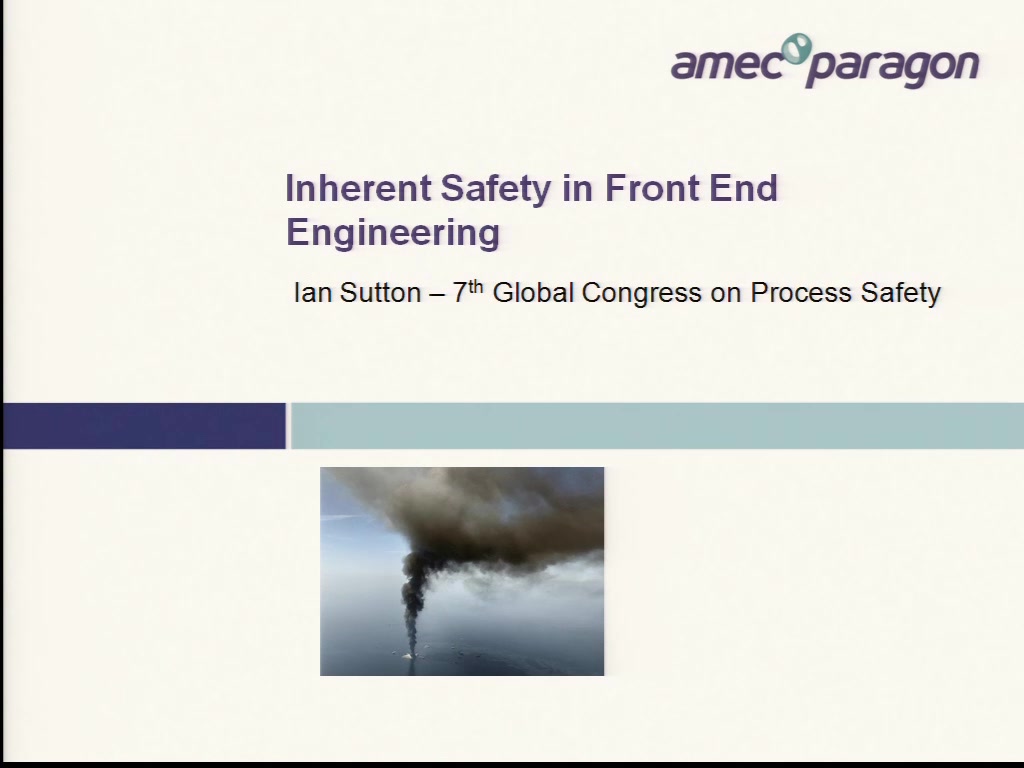 The best time to apply the principles of inherent safety is during the early stages of a design. In particular it is at the early stages that the ?Eliminate? option is best applied. For example, in the early stages of one design the process engineers had come up with a system of three knockout vessels in series. The vessels contained very high pressure gas. Serious consideration was given to eliminating two of the vessels and combining their functions in the first knockout vessel. Doing so led to a dramatic reduction in inventory of gas and also reduced problems to do with finding sufficient vertical space for the three vessel set-up.

The application of other inherent safety guidewords such as ?Substitute? or ?Minimize? is also best achieved during front end design. It is relatively easy to change the design to allow for a less toxic chemical to substitute for one that is more hazardous. However, it is much more difficult to make such as change once the final design has been authorized, or once the system is in operation.

This paper describes experiences with the application of the principles of inherent safety in the early design stages of a large project.

An early lesson learned was that most lead engineers do not have much training or exposure to the concepts of inherent safety, and they tend ?not to think that way?. Just telling them to apply the principles of inherent safety is not sufficient. In response to this concern a requirement was made that all technical documents, regardless of the discipline concerned, should start off with a short preamble showing how the author had considered the elements of inherent safety in his or her design.

The guidewords selected by the project were:

? An electrical engineer issuing a specification for a compressor motor would demonstrate how he considered the possibility of using lower voltage electricity (?Moderate?).

? A mechanical engineer responsible for designing the facility crane would show how consideration was given to minimizing the maximum weight load so as to reduce the impact of a dropped object (?Minimize?).

? A systems engineer would demonstrate that consideration was given to importing electrical power rather than generating it locally (?Eliminate?).

In practice, many of the lead engineers were not entirely comfortable with the above approach; it represented a new way of thinking. In these cases an alternative approach was used. All the technical leads would gather in a meeting to carry out a traditional squad check of the document. However, in addition to carrying out the normal engineering review, a process safety expert would guide the team through a discussion of the inherent safety guidewords as they applied to that document.

Having a team meeting, such as that just described, has a second benefit. The application of the principles of inherent safety can lead to unanticipated and unwanted results (the Law of Undesirable Consequences). In the case of the three pressure vessel train, for example, merging their functions into one vessel meant that solids removal became more difficult and potentially exposed maintenance workers to greater risk. A team discussion is more likely to generate an understanding of potential increased risks than is a single-person review.

The principles of inherent safety were also applied during the normal HAZID (Hazard Identification) process and in the early HAZOPs. HAZIDs traditionally consider guidewords to do with system issues such as total loss of power or spill of a toxic chemical. Most team members will then consider the consequences and likelihood of such events and, if necessary, generate findings and recommendations. On this project the inherent safety guidewords listed above were explicitly called out during the HAZID. For each scenario, the team leader would work through the guidewords listed above in order to make sure that full consideration had been given to the inherent safety concepts.

Implementing the principles of inherent safety as discussed above helped make the final design safer. However, there was a second, and more subtle, benefit. As the project progressed most of the engineers and other technical specialists would gradually ?get? the principles of inherent safety, and start to apply them in all situations, and at all times.

Such a way of thinking is ultimately what inherent safety is ?all about?, and is analogous to what occurred as HAZOPs were introduced. The immediate benefit of a HAZOP is to identify and correct high risk hazards. However, a more subtle, and much more important, role of a HAZOP is to inculcate a way of thinking that is baked into the way all personnel act and work. People learn to ?think the unthinkable?. So it is with inherent safety; use of the techniques discussed above help make the topic ?part of the furniture?.

Preview Presentation:
Presenter(s):
Ian Sutton
Once the content has been viewed and you have attested to it, you will be able to download and print a certificate for PDH credits. If you have already viewed this content, please click here to login.