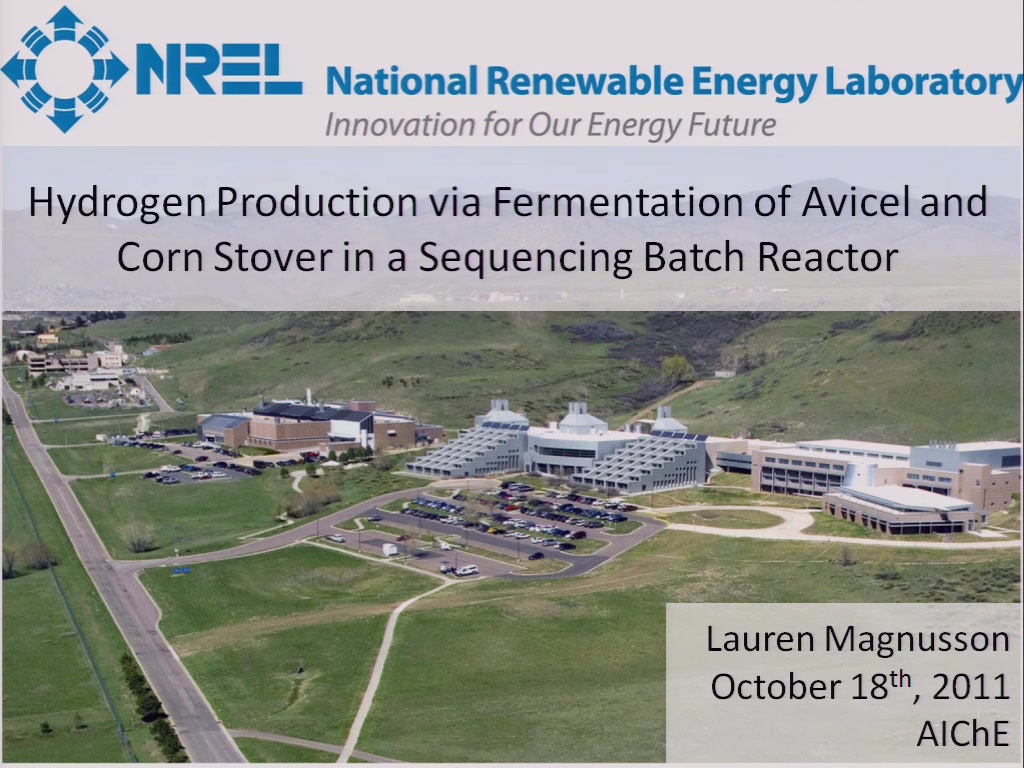 When produced from waste lignocellulosic materials, hydrogen is one of the most promising options for a long-term, net-zero emission energy carrier. A major barrier to industrial scale production of bio-H2 is its techno-economic feasibility. Advances in consolidated bioprocessing are required to improve the rates of cellulose hydrolysis and its subsequent fermentation to H2. Clostridium thermocellum is a thermophilic anaerobic microbe with one of the highest known rates of cellulose degradation. The goal of this study is to improve substrate utilization by employing a sequencing batch reactor, which would increase substrate hydrolysis leading to higher rate and yield of hydrogen. Reactor parameters and substrate loading were first optimized in batch mode, using C. thermocellum grown on avicel and pretreated cornstover at 1, 2.5 and 5 g/L. We observed that an increase in carbon loading led to higher rates of H2 production yet with a lower H2 molar yield (mol H2/mol hexose) in both substrates. These data guide the fermentation in sequencing batch mode, which was initiated by running a 2.5 g/L fermentation for 24 hours followed by settling the unfermented solid substrate along with bacteria for one hour. This was then proceeded by removing 500 mL of the clear supernatant using a peristaltic pump, adding 500 mL of fresh media (gassed out with nitrogen gas) and substrate and turning the agitation back on. Four cycles were completed for each carbon loading condition. The hydraulic residence time (HRT) tested was 48 hrs, with a carbon loading of 2.5 and 5.0 g/L/d.

Initial results indicate that at a carbon loading of 2.5 g/L/day, all of the substrate was consumed and the bacteria did not settle when agitation was turned off. The average concentration of protein in the supernatant after settling for an hour was 164 mg/mL. At 5.0 g/L/d loading, we observed an excess of substrate present in the reactor and the avicel turned orange, which is an indicative of presence of cellulosome hence bacterial attachment. Protein concentrations were measured before settling (208 mg/mL), and in the supernatant after settling (38 mg/mL). The data suggest that by operating sequencing-batch fermentation with excess cellulose, approximately 80% of the bacterial biomass can be retained, presumably fully adapted to degrade cellulose. Additionally, the average rate of hydrogen production was increased from 0.60 to 0.92 mmol/L/hr during the 5 g/L/d carbon loading condition. One of the main benefits of sequencing-batch operation is the removal of the lag phase at the beginning of conventional batch-fermentations, once adapted. The time to peak hydrogen production in batch one is almost 19 hours. By the fourth fed-batch cycle, this number drops to 4 hrs. Collectively our findings form the basis for further optimization to improve the techno-economic feasibility of hydrogen production via fermentation.

Preview Presentation:
Presenter(s):
Lauren R. Magnusson
Once the content has been viewed and you have attested to it, you will be able to download and print a certificate for PDH credits. If you have already viewed this content, please click here to login.

Biojet Production From Hydrocracking of Vegetable Oil
The development of fuels from alternative and renewable sources to replace commercial petroleum products has been a subject of increasing research in recent...
Hydrogen As a Vector for the Energy Transition
Hydrogen can play a key role as an energy vector for difficult-to-decarbonize industries and sectors including heavy duty trucking and transport, marine...