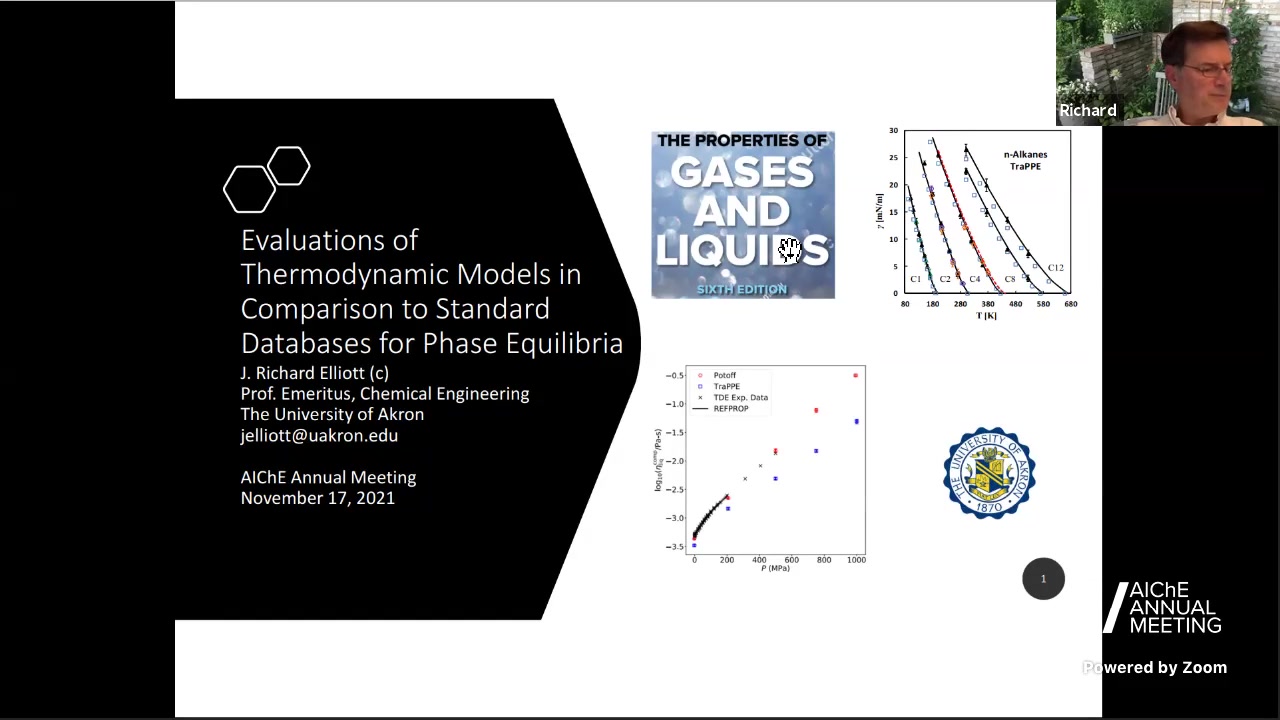 Quite often, new thermodynamic models are proposed with limited comparisons to existing models. This makes it difficult to fully comprehend the progress that is made as models become more sophisticated. In this presentation, we evaluate many models in relation to multiple standard databases, facilitating a clearer picture of the relative strengths of the various theories. The equation of state (EOS) models we consider are REFPROP, Peng-Robinson (PR), translated consistent PR (tcPR), PC-SAFT, CPA, GC-PPC-SAFT, SAFT-VR, ESD, SPEADMD. For activity models we include COSMO-RS/CosmoTherm, COSMO-RS/SAC-TRC, COSMO-RS/SAC-Phi, UNIFAC-KTmod, UNIFAC-NISTmod, and NRTL. The databases we consider are developed from binary pairs from Appendix A of the Properties of Gases and Liquids, 6ed (PGL6ed) for the properties of excess volume and excess enthalpy. For vapor-liquid equilibria (VLE), we apply the standard database published by Jaubert et al. to evaluate EOS models over the full range of pressures, supplemented by low pressure VLE data from the TRC database to include activity models in the evaluations. For liquid-liquid equilibria (LLE) and infinite dilution activity coefficients, the Jaubert database is similarly supplemented with data from the TRC database focusing on binary pairs from Appendix A of PGL6ed. We find that the various implementations SAFT EOSs provide significant improvements for aqueous solutions, but the differences are marginal for non-aqueous systems. For example, for VLE the average absolute percent deviation (%AAD) for non-aqueous systems was roughly 3-5% for all EOS models vs. the Jaubert database, but the deviations ranged from 20-100% for aqueous systems. Several nuances are addressed to make the comparisons. For example, the ESD model is restricted to its 1996 form, where solvation of non-associating species is ignored in favor of the enhancement in computational speed offered by the square-root combining rule. Computational speeds vary according to PR < ESD96 < PC-SAFT < SPEADMD. The implementation of PC-SAFT applies solvation to relatively few molecules, whereas solvation is quite common and often complicated in the SPEADMD model, e.g. for methoxyether alcohol mixtures. Another complicating factor is that not all models are fully characterized for all compounds in the database. For example, PR, tcPR, ESD96, and SPEADMD include all molecules in the Jaubert database, and PC-SAFT is very close, but CPA and GC-PPC-SAFT cover substantially fewer. These nuances are treated by reporting the number of systems available for each model in each pair of categories: normal, heavy, polar, associating, and aqueous. For activity models, the COSMO-RS models perform nearly as well as the UNIFAC models, despite having an order of magnitude fewer adjustable parameters. Molecular simulation models cover too few systems to justify inclusion in this comparison, but progress is being made and such comparisons may be feasible in the not too distant future. The use of MBAR as a platform and surrogate model for refining force fields offers the prospect of rapid advancement of molecular modeling approaches. We conclude with a summary and outlook for future progress in the field.
Preview Presentation:
Presenter(s):
Vladimir V. Diky
J. Richard Elliott
Once the content has been viewed and you have attested to it, you will be able to download and print a certificate for PDH credits. If you have already viewed this content, please click here to login.