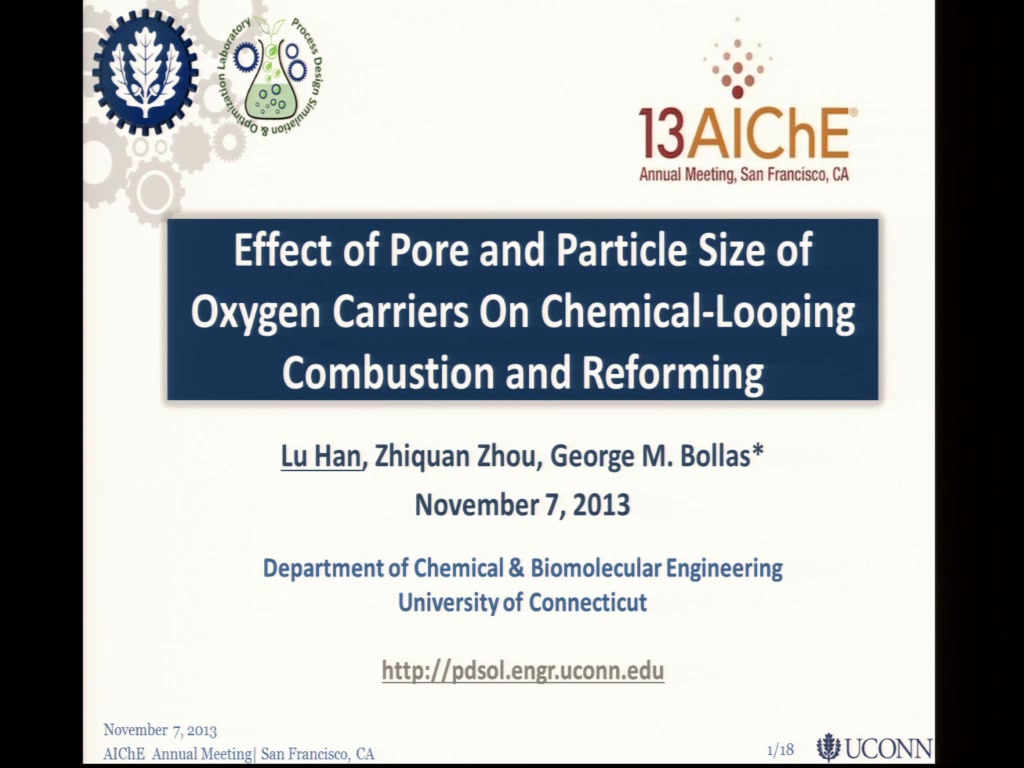 Chemical-looping combustion (CLC) addresses the current CO2 problem caused by fossil fuel utilization for power production. The main advantage of CLC over conventional power production technologies is that direct contact between air and fuel is circumvented, so that a pure stream of CO2 is obtained without nitrogen dilution. An intermediate oxygen carrier (metal/metal oxide) is alternatively oxidized and reduced by the fuel and oxygen. Two successive reactions take place between two reactors shown in Figure 1. In this manner, CO2 can be captured from the flue gases of the Fuel reactor without additional separation and high energy penalty. Chemical-looping reforming (CLR) is similar to CLC however a mixture of steam and fuel is sent to the Fuel Reactor to induce reforming reactions and produce syngas.

Research in the chemical-looping (CL) process has been focused on the development and testing of oxygen carrier particles. Favorable characteristics of high performance oxygen carriers include: high reactivity toward oxidation and reduction cycles, high melting temperature, low tendency of attrition and fragmentation, low toxicity, low cost and high combustion efficiency. Most reported work on CL has been accomplished using oxygen carrier particles where the active component (Cu, Fe, Ni, Mn) is formulated on an inert material [1]. This work focuses on reported studies utilizing Ni-based oxygen carriers for its high reactivity in the combustion of methane and catalytic properties.

A particle model is developed to study the effect of internal transport on the reaction rates. Intraparticle diffusion limitations need to be accounted for particles that are millimeters in size [2]. Due to the importance of Knudsen diffusion, internal transport resistance of different gases gives rise of concentration gradients inside the pores. Reaction rates are observed highest at the particle surface and decrease along the pore length. This knowledge can aid in oxygen carrier design to avoid over-estimation of the system performance when no mass transfer effects are considered. Incorporated into a reactor model, optimum particle dimensions are proposed to conduct CLR in a fixed-bed reactor that makes use of the intraparticle effects to maximize H2 selectivity.

It is also worth to explore the change in particle morphology over many reduction and oxygen cycles in CLC and CLR. Investigators have reported increasing reactivity with usage associated with micro-cracking of the particle surface and migration of the Ni particles to the surface. With the particle model, the real changes to particle porosity, surface area, and pore size are accounted for, which influence the role of transport resistance on the performance. Observations made from experiments on the particle morphology are utilized to predict reactivity changes over cyclic tests.

Lastly the interaction between NiO and Al2O3 support is addressed because when present, the spinel can significantly lower the reactivity of the oxygen carrier. For instance, the reactivity of two supported NiO-oxygen carriers differing only by the calcination temperature of the support was measured in a thermogravimetric analyzer at 800°C in a H2-environment (Figure 2). The Al2O3 support existed in the γ-phase in the low temperature pre-treatment and exhibited a phase transformation into α upon high temperature calcination. More instance of spinel formation occurred in the γ-Al2O3 support which resulted in comparably lower reactivity of the oxygen carrier. A kinetic scheme that combines the simultaneous reduction of NiO and NiAl2O4 is used in the particle model. Reduction data of Ni-based oxygen carriers with varying spinel phases are studied for the purpose of assessing the impact of spinel on kinetic rates. Kinetic parameters derived from the particle model are presented and model-experiment deviations are discussed. 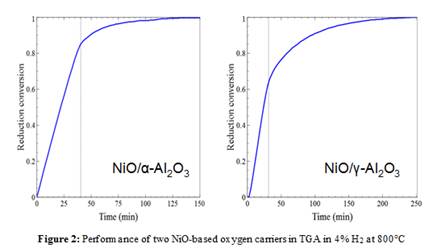 Acknowledgement: This material is based upon work supported by the National Science Foundation under Grant No. 1054718.

Preview Presentation:
Presenter(s):
Lu Han
Once the content has been viewed and you have attested to it, you will be able to download and print a certificate for PDH credits. If you have already viewed this content, please click here to login.

Industrial Fluid Mixing for Engineers
This online course covers fundamentals in mixing theory including a section on scale-up, practical applications to mixing technology and advanced topics such...
Are Unconfined Hydrogen Vapor Cloud Explosions Credible?
A question is frequently raised by owner/operators of chemical processing and refinery sites as to whether unconfined hydrogen vapor cloud explosions can...