Dust Explosions: A New Path to Estimate the Explosibility Characteristics of an Organic Powder | AIChE
Skip to main content

Dust Explosions: A New Path to Estimate the Explosibility Characteristics of an Organic Powder 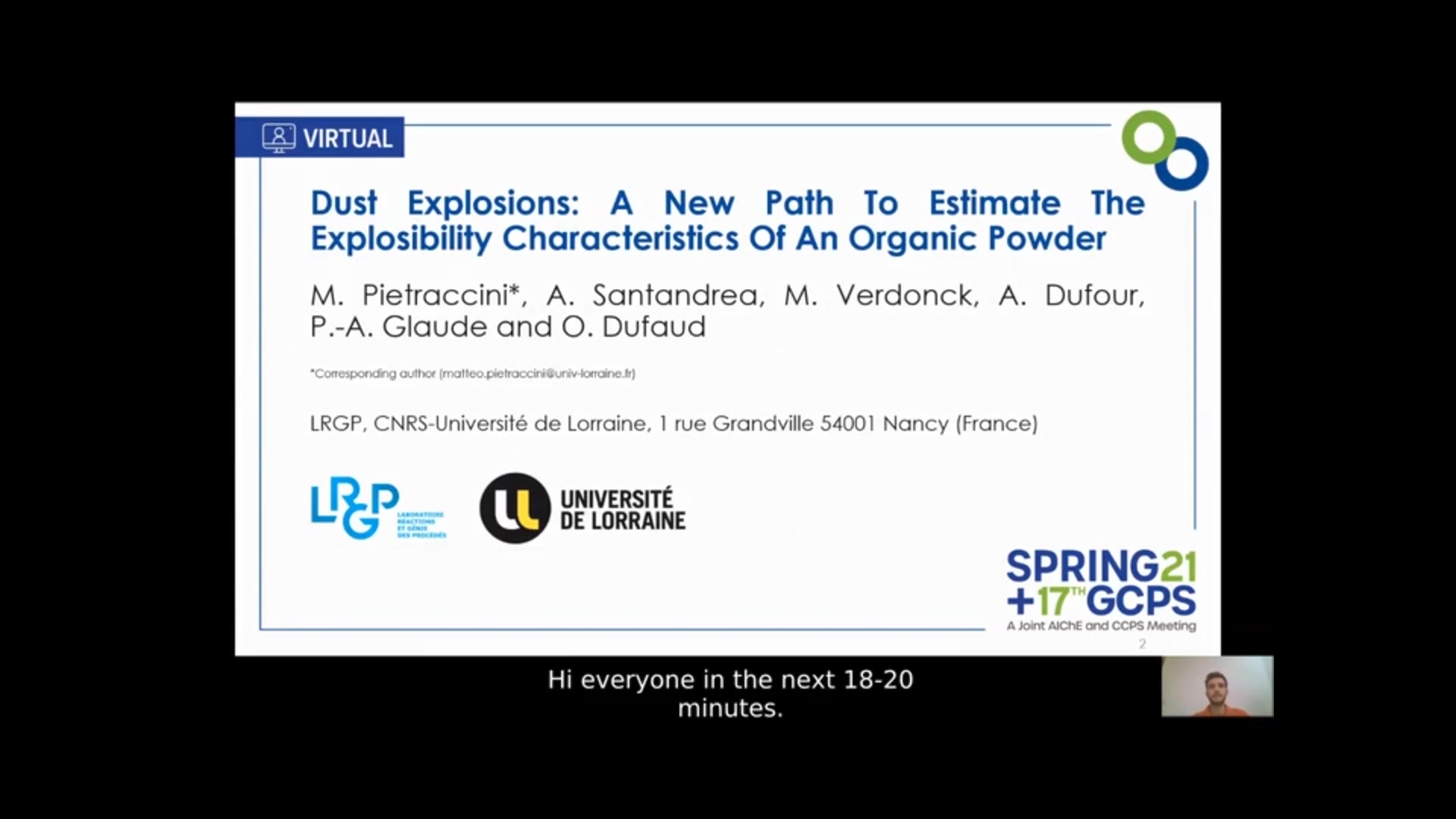 The need to characterize the explosibility characteristics of a powder has led to the need to understand the crucial aspects of a dust explosion. Given the large number of parameters affecting the dust explosion severity, the experimental protocol defined by the international standards is often considered as a necessary but minimalist approach. The underlying idea is to propose test protocols adapted to each powder or, at least, to main powder categories (metal nanopowders, micron-sized organic dusts...). Such protocols should be independent of the industrial operating conditions (turbulence, vessel dimensions...) but representative of the combustible cloud. Therefore, the â€˜questâ€™ for the laminar flame velocity, an intrinsic characteristic of fuel/air mixture, seems to be a relevant alternative. The main goal of this studyis to propose a three-steps approach to determine dust explosion characteristics: i) the experimental determination of the combustion kinetics of a dust cloud, ii) the assessment of alaminar flame velocity Sul through a numerical model, iii) the conversion of Sul into explosion characteristics, especially the maximum rate of pressure rise thanks to specific relationships.

In this work, organic dust explosions were analyzed by decomposing them into their fundamental bricks (heat transfer to the particle, pyrolysis, oxidation and flame propagation) and by focusing on their limiting step according to their characteristic times and rates. In order to elaborate a model describing such steps in an accurate but lumped way, a modified Godbert-Greenwald furnace was used to characterize heat exchanges and kinetics parameters of the pyrolysis and combustion reactions occurring during the explosion of a dust cloud. Cellulose was chosen as sample for its regular and well known chemical structure. The pyrolysis/combustion gases, tar and char were collected and analyzed as a function of various parameters: particle size distribution, fuel equivalence ratio, relative humidity and temperature of the heated chamber. A peculiar rise of H2/CO ratios with the temperature (from 0.22 at 700°C to 0.62 at 900°C) suggested that a gaseous phase reaction (such as a water gas shift) might activate above a reactor temperature of 800°C. C2H4/CO and CH4/CO ratios also increased with temperature, but the maximum values were much lower (respectively, 0.12 and 0.18). CO2/CO, on the other hand, seemed to follow a slightly decreasing profile with temperature, with an average value of 0.30.

Based on these experimental data, simplified mechanisms (6 to 10 lumped reactions) were developed and implemented in a numerical model estimating the laminar flame velocity. Tests were performed in a flame propagation tube to determine the spatial flame velocity. By taking the Karlovitz factor into account, Sul can be assessed (e.g. 21 cm.s-1 for cellulose) and compared to the numerical value in order to validate the model.

Existing correlations linking Sul and the turbulence intensity vrms in the 20L sphere (determined by Particle Image Velocimetry) to the turbulent flame velocity Sut were applied. Using Silvestini relationship, the final results were compared to the maximum rate of pressure rise obtained in a 20L sphere using a standard procedure.

Preview Presentation:
Presenter(s):
Olivier Dufaud
Anthony Dufour
Pierre-Alexandre Glaude
Matteo Pietraccini
Audrey Santandrea
Once the content has been viewed and you have attested to it, you will be able to download and print a certificate for PDH credits. If you have already viewed this content, please click here to login.