Crisis Management in the Minas-Rio Pipeline Incident: The Case Study of the Mining Industry | AIChE
Skip to main content

Crisis Management in the Minas-Rio Pipeline Incident: The Case Study of the Mining Industry 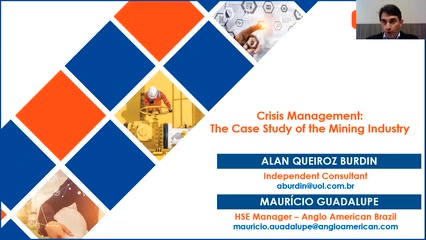 Crisis management in the pipeline incident: the case study of the mining industry
This paper aims at presenting the case study involving the incident of the iron ore concentrate pipeline, in Brazil, South American when it was applied the Inccident Command System methodology. Two incidents marked the venture's history. On the 12th, there was a rupture of the pipeline, causing a discharge of 318 tons of iron ore in the Santo Antônio do Grama Stream, causing the interruption of water supply in the municipality of Santo Antônio do Grama (MG) town. After the repairs and immediately after the return of the operation, a second rupture occurred on March 29, 400 meters from the site of the first rupture, causing the dumping of 174 tons of ore over the Santo Antônio do Grama Stream and 473 tons over a Rural property. Both incidents had environmental, financial, social and reputational impacts on the community. As an immediate response, a crisis committee was set up, which conducted a management process, resulting in the completed remediation of environmental damage and the safe and sustainable return of the pipeline operation in December 23.

Recovery of degraded areas - environmental rehabilitation of river banks impacted by remediation activities. Given the above, it is concluded that company has learned the lessons learned from both incidents, implementing several actions to prevent further leaks. Since the return of operations, there have been no disruptions or any other

Preview Presentation:
Presenter(s):
Alan Burdin
Lawrence Burdin
Alan Golembiewski
Lawrence Golembiewski
Mauricio Guadalupe
Lily Guadalupe
Mauricio Li
Lily Li
Once the content has been viewed and you have attested to it, you will be able to download and print a certificate for PDH credits. If you have already viewed this content, please click here to login.

Dust Explosions
The danger of combustible dust is present in virtually every facility, including yours. Are you doing everything to possible to mitigate hazards? During the...
A Model-Centric Framework for the Smart Manufacturing of Polymers
Plastic and polymeric materials have an enormous impact on a variety of industries and our daily lives. The synthesis of polymers occurs by reacting small...