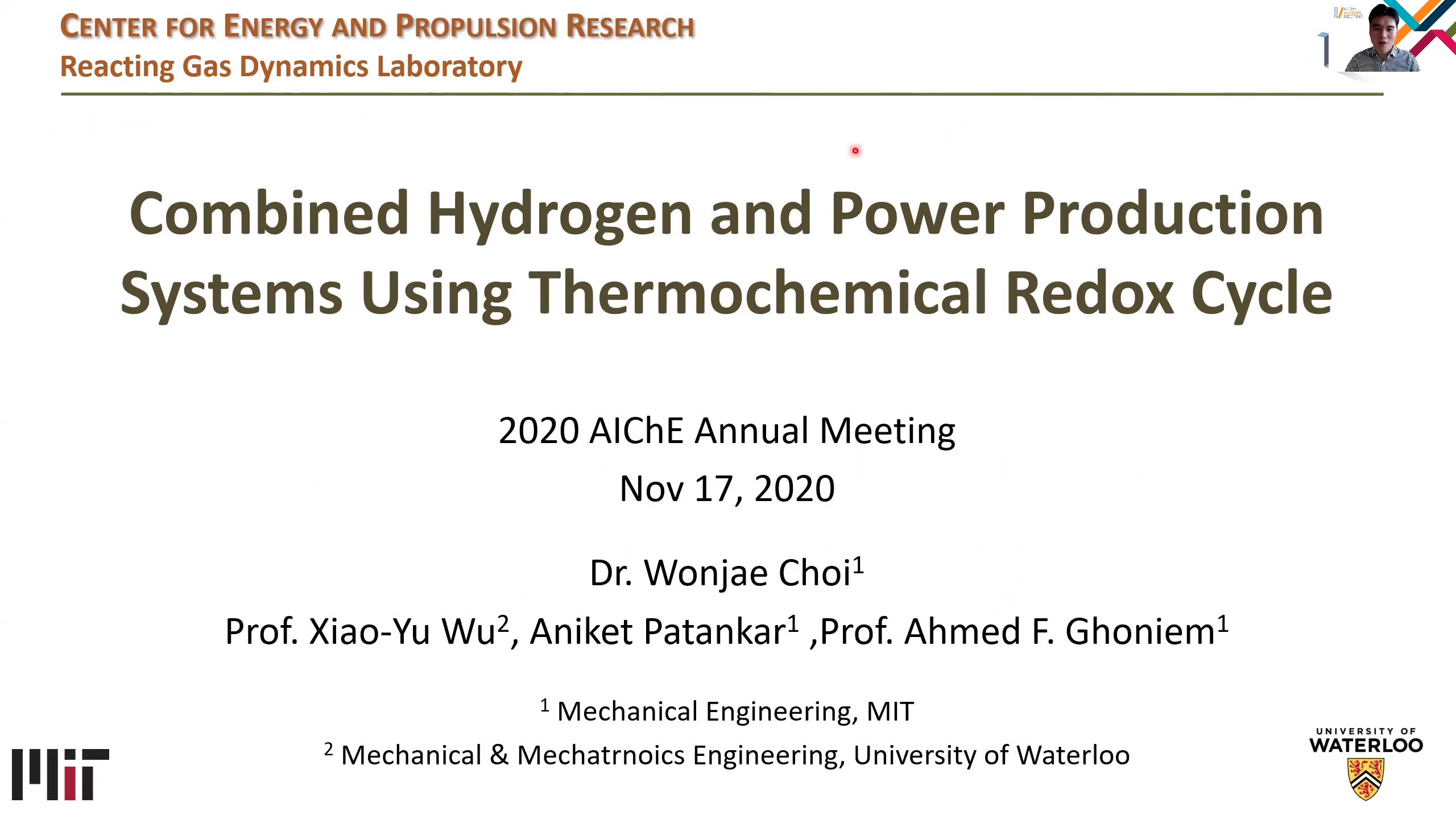 Two-step thermochemical redox cycles using metal oxides present a promising approach to produce hydrogen because they utilize intermediate to high-temperature heat. However, their thermodynamic efficiency remains low with the rest of energy supplied to the system emitted to the surrounding or to a heat sink typically at the lowest temperature of thermochemical cycle, that is the temperature for oxidation step (> ~800°C).

We propose a method for increasing system efficiency by adding a bottoming cycle that utilizes this high quality wasted heat. Various conversion processes operating at these temperatures can be used as a bottoming cycle, such as a Rankine cycle or a supercritical CO2 Brayton cycle for power production, and natural gas steam reforming or biomass gasification for producing fuels. In particular, we analyze three different system concepts for combined hydrogen and power production, having power generation system as the bottoming cycle.

The figure below shows schematics of three system concepts. The first has two loops, hot and cold, to transfer heat from the heat source to thermochemical reactors and the bottoming cycle. In the hot loop, a reactor in its reduction step receives the heat required for increasing the temperature of reactor and the endothermic reduction reaction, from the heat source. In the cold loop, the bottoming cycle receives heat from a reactor in its oxidation step. The remaining thermal energy in the reactor after solid-heat recuperation and the heat generated from the exothermic oxidation reaction are transferred to and utilized in the bottoming cycle. Vacuum pumps and water pumps are used during the reduction and oxidation reactions. In general, excess steam is utilized as input to the reactor during the oxidation step, and it is difficult to recover most of the energy used to generate that steam. The second concept is similar to the first, but it utilizes the water stream used in thermochemical reactors directly as the working fluid of the bottoming cycle to decrease these steam generation related losses. While the first and second concepts have two loops, which need a pump operating at very high temperature (such as graphite or ceramic pump) if using a fluid to transfer heat from the heat source to the reactors, the third concept has only one loop. Because the third concept has only one loop, it does not need such pump and the system is less complicate.

To determine the pros and cons of these three systems, we perform thermodynamic analysis to evaluate the hydrogen production efficiency and power generation efficiency. The first and second concepts achieve higher hydrogen production efficiency than the third concept especially when solid heat recuperation is high. However, water losses in the first concept are large which makes the second system concept more attractive. The second concept reduces water losses but the reactor needs to operate between vacuum and ~ 50 bar, which is the operating pressure of the Rankine cycle. The supercritical CO2 Brayton cycle, which generally has a better efficiency than the Rankine cycle, cannot be applied to the second concept because the working fluid is steam. The third concept has relatively low hydrogen production efficiency but the upper temperature of the bottoming cycle is relatively high so that it can achieve better power generation efficiency compared to the first and second concepts. Ceria is used for the analysis but the same framework can be applied to the system using other materials. Techno-economic analysis will be provided to compare the levelized costs of hydrogen and electricity produced from these combined hydrogen and power production systems with hydrogen-only production system and power-only production system using the same heat supply. 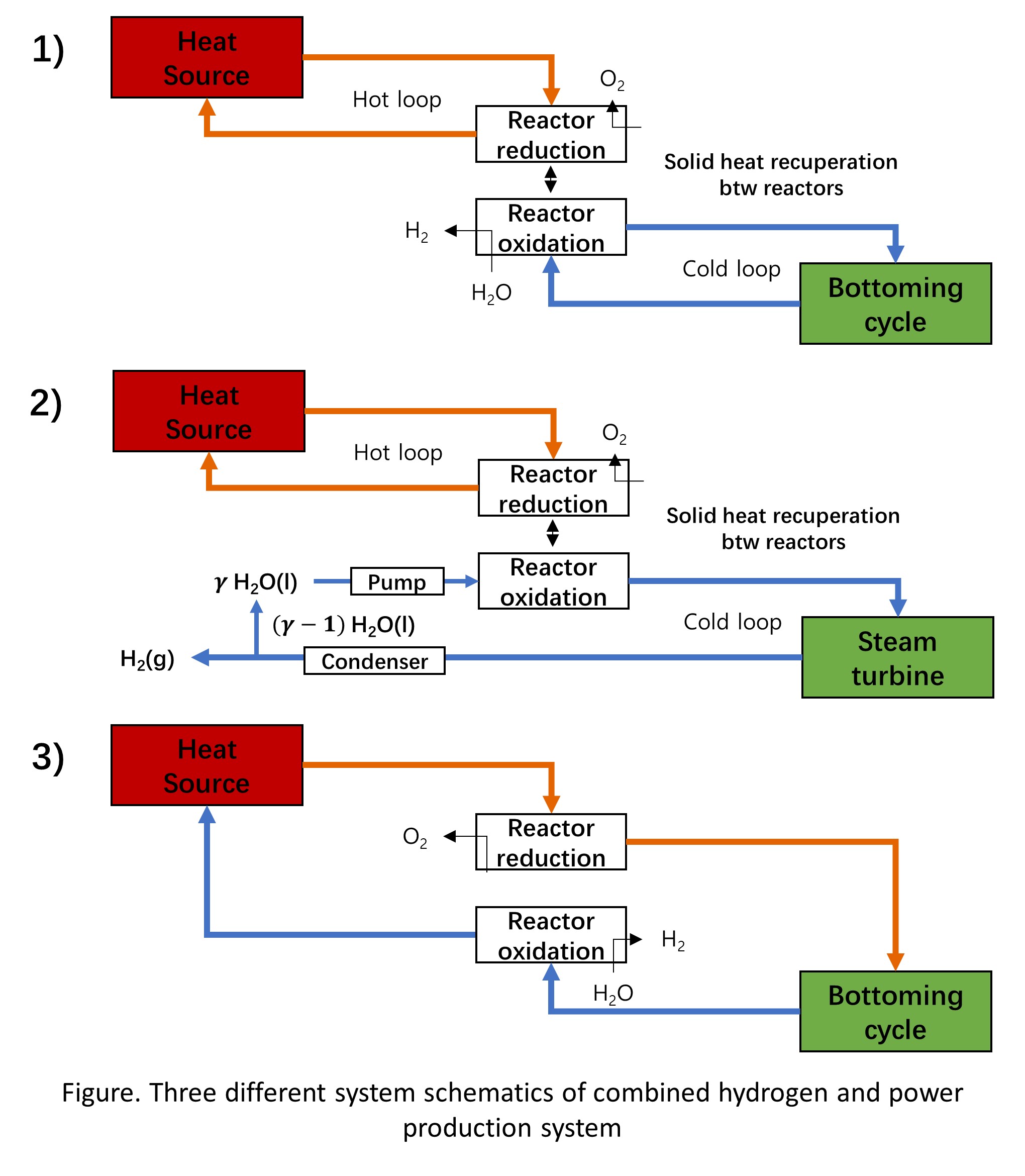 Preview Presentation:
Presenter(s):
Wonjae Choi
Ahmed F. Ghoniem
Aniket Patankar
Xiaoyu Wu
Once the content has been viewed and you have attested to it, you will be able to download and print a certificate for PDH credits. If you have already viewed this content, please click here to login.