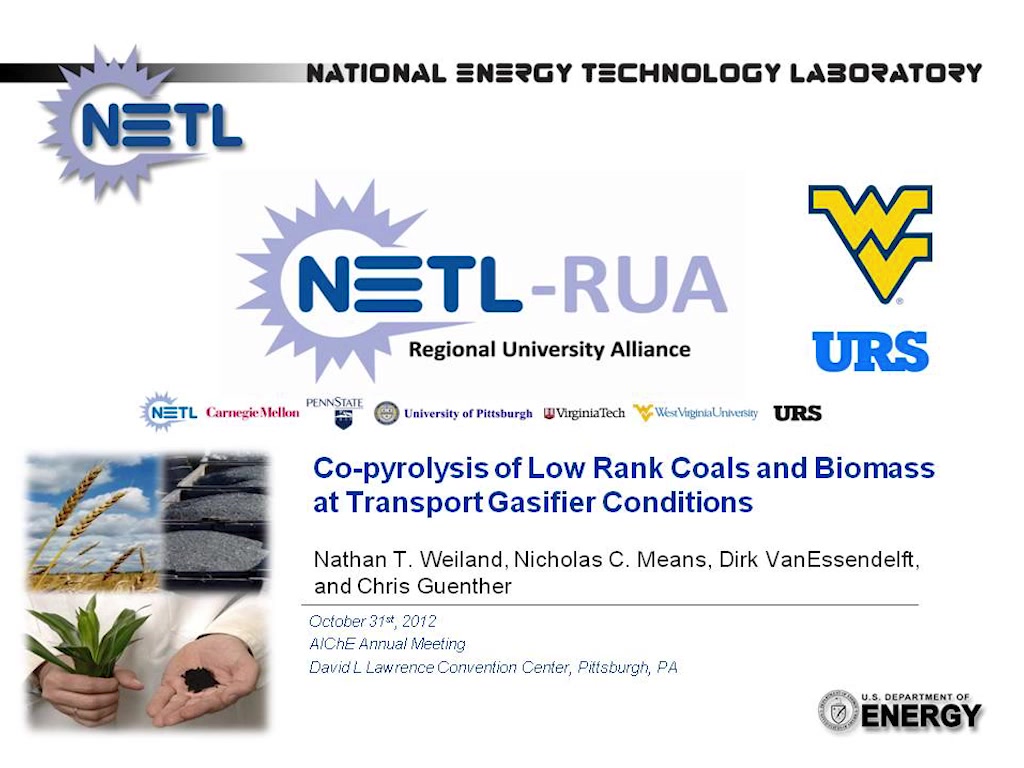 Given the EPA’s proposed rules on limiting CO2 emissions from new coal power plants to match those of natural gas, blending of carbon-neutral biomass with coal is an increasingly attractive option for power producers.  Further, gasification technologies that can capture and store CO2 prior to combustion are also being considered, and efforts to reduce the cost of electricity from such plants include the consideration of cheaper, lower rank coals and lignites, a significant and under-utilized resource within the United States.  Transport gasifiers hold significant promise for achieving the desired CO2 emissions reductions in this manner, particularly in regard to low rank fuels.  As a result, the United States Department of Energy’s National Energy Technology Laboratory (NETL) has undertaken a significant research effort to advance the technology of transport gasification through state-of-the-art multi-phase computational modeling.

In order to most accurately model the effects of co-feeding low rank coal and biomass into such a reactor, an experimental effort has been carried out to obtain kinetic rates and product distributions for co-pyrolysis and co-gasification of coal and biomass feedstocks currently in use at the Transport Integrated Gasifier (TRIG) at the National Carbon Capture Center in Wilsonville, AL.  The focus of this study is to evaluate of the complex pyrolysis reaction and to provide fundamental co-pyrolysis kinetic data under transport gasifier conditions for inclusion into NETL’s Carbonaceous Chemistry for Computational Modeling (C3M) platform, which supplies kinetic information to multiphase CFD codes and other computational models.

The experimental test matrix includes sub-bituminous Powder River Basin (PRB) coal, Mississippi lignite, Southern Yellow Pine, multiple PRB/pine blends, and an 80/20 lignite/pine blend, at temperatures ranging from 600 – 975 °C, and pressures of 1, 4 and 16 atm.  Co-pyrolysis tests were performed in an isothermal drop reactor, where rapid sampling via in-situ mass spectrometry yields kinetic rates as well as quantitative product gas measurements of the primary syngas constituents CO, CO2, CH4, H2, H2O, H2S and C2H4.  Product distributions of these species, as well as char and tar, are found to be approximately linear with respect to temperature and biomass blend ratio.  These results are generalized to all blend ratios, temperatures, and pressures within the ranges studied through curve fit coefficients generated by regression analysis.  Both kinetic activation energies and pre-exponential factors are shown to be non-linear with respect to biomass blend ratio, indicating a significant reaction synergy in co-pyrolysis of low rank coals and biomass that must be accounted for in accurate modeling of transport gasifier systems.  Comparisons are also made to kinetics and product distributions available in other kinetic modeling packages used for coal reaction chemistry.

Preview Presentation:
Presenter(s):
Nathan T. Weiland
Once the content has been viewed and you have attested to it, you will be able to download and print a certificate for PDH credits. If you have already viewed this content, please click here to login.

A Computational Study of Role of Surface Hydroxylation in Enhancing Propene Selectivity during Propane Oxidative Dehydrogenation over Ni Doped CeO2 Nanorods
Propane oxidative dehydrogenation (ODH) is a potential alternative for the conventional cracking processes, as it is an exothermic and a direct process for...
One-Body Hybrid Solid Packing for Sorption-Enhanced Water Gas Shift Reaction
The interest in hydrogen , regarded as a new clean energy carrier , has been increasing with the expectation for the upcoming hydrogen economy. In the hydrogen...