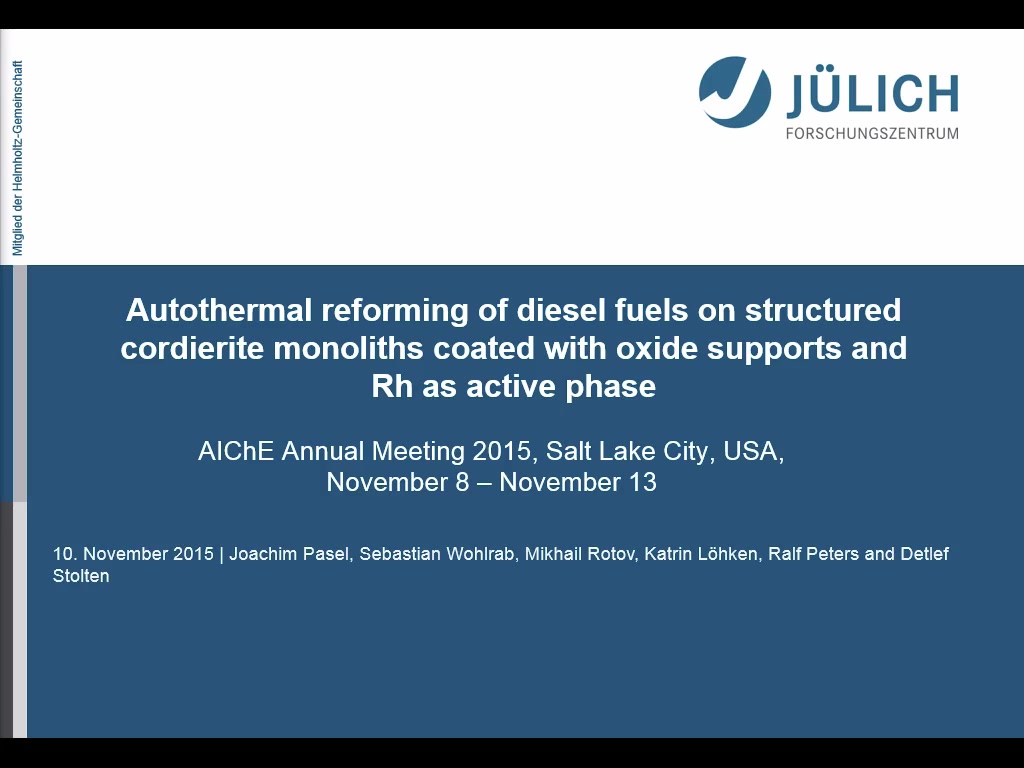 The scientific work in the fuel processing and systems group at Forschungszentrum Juelich has the strategic aim of developing high-temperature polymer electrolyte fuel cell (HT-PEFC) systems based on autothermal reforming of diesel fuel and kerosene in the power class of 5 kWe to 10 kWe. The main component of the system besides the HT-PEFC stack is the autothermal reformer (ATR).

Several publications were released in the recent years by the fuel processing and systems group at Juelich dealing with the autothermal reformer, the catalytic burner and the complete fuel cell system [1-6] with special focus on reactor development, system development and experimental evaluation thereof. Complementary to these papers, this contribution is about the preparation, experimental evaluation and characterization of six different catalysts for the autothermal reforming.

In general, the catalysts were deposited on monolithic cordierite substrates and consisted of an oxide support and an active Rh phase. The oxide supports were either purchased or synthesized by the Leibniz Institute for Catalysis (LIKAT) in Rostock, Germany. LIKAT also coated the supports on the cordierite substrates followed by decoration with active Rh particles. For simplicity reasons, in this abstract the combination of active phase, support and substrate will only be denoted as “catalyst”, although, from the chemical and catalysis point of view, this label is only valid for the active phase itself.

The following six different catalysts were synthesized: Rh/γ-Al2O3, Rh/La-Al2O3, Rh/CeO2, Rh/Gd-CeO2, Rh/ZrO2 and Rh/Y-ZrO2 with theoretical mass fractions of the support and the active phase of approx. 10 ma% and 1 ma%, respectively. Thereby, each value referred to the total mass of the catalyst. The obtained H2 concentration after the catalytic autothermal reforming was chosen for the evaluation of the specific catalyst activity and stability. Any difference in the activity of the different catalysts or any loss of stability caused by any possible reason (sintering, deposits on the catalyst surface, etc.) directly influences the concentration of H2according to the general equations (1)-(4).

This contribution describes, explains and discusses the results of the experimental evaluation of the six different catalysts with respect to their catalytic activity and stability for autothermal reforming and finds correlations with the results from the catalyst characterization experiments.

Table 1     Properties of diesel fuels used for the experimental evaluation

Preview Presentation:
Presenter(s):
Joachim Pasel
Once the content has been viewed and you have attested to it, you will be able to download and print a certificate for PDH credits. If you have already viewed this content, please click here to login.

Pyrochlore (A2B2O7) Based Catalysts for Hydrogen Production By Hydrocarbon Reforming
Pyrochlores are a class of ternary metal oxides with general formula (A 2 B 2 O 7 ) where the A-site is occupied by the large rare-earth metal cation and the B...
Right-Sizing Lab Fixed Bed Reactors for Gas-Solid Systems
Developed by the Core R&D Reaction Engineering group of Dow and designed for chemists and engineers who operate or use data from laboratory reactors, this...