Scalinng-up From High Throughput Screening to Continuous Process for the Synthesis of 1,6-Hexanediol from Renewable Feedstocks | AIChE Academy
Skip to main content

Our new learning platform is now LIVE! You may now access your courses at learn.aiche.org

Scalinng-up From High Throughput Screening to Continuous Process for the Synthesis of 1,6-Hexanediol from Renewable Feedstocks

Since the beginning of the 21st century, the chemical industry has been making many novel and ingenious innovations to design cost-advantaged, inherently safe, and sustainable processes based on renewably- sourced feedstocks for the production of fuels, chemicals, and advanced materials. However, there is still a persistent public perception that the chemical industry is not doing enough to develop safe and sustainable chemistry. As a matter of fact, a large number of scientists, environmental scholars, business leaders, and governmental policymakers believe that chemical industry must do more to develop sustainable processes to save our planet from the dire consequences of climate change.
During the last three decades, DuPont has been in the forefront of developing sustainable products and processes. One such endeavor was to develop a cost-competitive process for the synthesis of 1,6- hexanediol from renewable feedstocks. Several potential feedstocks have been investigated with the main intermediates being 1,2,6-hexanetriol (1,2,6-HT) and tetrahydropyran-2-methanol (THP2M) as shown in Figure 1.

Multimetallic catalysts have been shown to be valuable for a variety of industrially-practiced reactions, including biomass valorization. We have explored the activity, selectivity, and life of supported metal- metal oxide catalyst combinations using high throughput screening and continuous trickle bed reactors for the hydrodeoxygenation of biomass-derived feedstocks. [1-5]
The development work started with the synthesis and screening of plethora of supported metal and metal-oxide catalyst systems (Figure 2). The initial proof of concept (PoC) was performed in small high- throughput batch reactors (milligram quantity of catalysts in powder form). After completing PoC, the process was transferred from batch reactors to continuous reactors, which comprised of high-throughput trickle-bed test units (gram catalyst scale, in powder form, with 16 reactor tubes in parallel) to closely match the operating conditions of a commercial continuous hydrodeoxygenation process. The first two steps comprised of screening several hundred catalysts under a broad range of operating conditions to determine the activity, selectivity, and stability of the catalysts. Performance targets were set based on the initial results and techno-economic evaluation. In the next step, several lead catalyst candidates were identified and subsequently scaled-up to shapes (extrudates and pellets) and sizes (e.g., 1/16â€ and 1/8â€)
similar to that of standard commercial catalysts. During this evaluation process, a few grams of the selected catalysts were further optimized by extending the range of operating conditions. In the final stage of the development work, the amount of catalyst was increased into hundred-gram scale using a semiworks-scale test rig. The latter had a lower degree of parallelization but a high degree of flexibility for each catalyst system. The catalyst systems were operated independently in their preferred reaction conditions and over a longer period with industrially relevant feedstock to assess long-term catalyst stability. Larger quantities of the effluent streams were collected for more detailed product analytics and separation and purification workstreams. The results obtained from the reactor scale-up study were used to further refine the techno-economic analysis and were used as an input for designing the pilot plant. 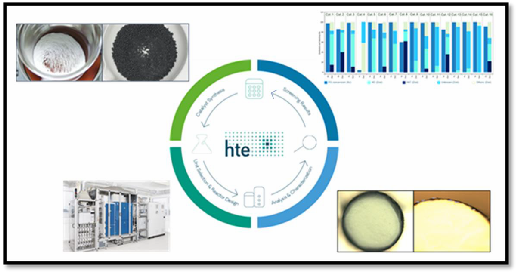 The performance of the catalysts, with special reference to Pt-WOx/TiO2, the lead catalyst candidate, for the hydrodeoxygenation of 1,2-HT and THP2M and the significance of the batch and continuous reactor systems for the synthesis of 1,6-HD will be discussed in the presentation.