Authors:
Kar, A. - Presenter, The University of Texas, Austin
Bhati, A., University of Texas at Austin
Mhadeshwar, A. B., University of Connecticut
Venkataraman, P., Rice University
Barckholtz, T., ExxonMobil Research and Engineering
Celio, H., Texas Materials Institute
Mangolini, F., University of Texas at Austin
Bahadur, V.
Acharya, P., The University of Texas at Austin
Gas hydrates offer technological solutions in areas like CO2 capture and sequestration, desalination and gas separation. Formation of gas hydrates is severely constrained by long induction (wait) times, which can range from hours to days in the absence of external promotion techniques. Presently, we report that magnesium (in pure and alloyed form) can significantly accelerate the nucleation of CO2 hydrates. We report magnesium-promoted induction times of just a few minutes (in the absence of surfactants and mechanical stirring), via statistically meaningful measurements of nucleation kinetics in milli-liter volume reactors. Interestingly, in larger reactors (half liter volume) we observe instantaneous nucleation, where hydrates nucleate even before the reactor is completely pressurized with CO2. This is the fastest reported nucleation time of gas hydrates in quiescent gas-water systems. Visualization of hydrate formation coupled with post experiments-XPS and FTIR analysis reveals important insights underlying nucleation promotion. Overall, this simple, passive, environmental-friendly technique opens up new pathways towards instantaneous nucleation, thereby solving a key challenge in the field of hydrates.

Gas hydrates are ice-like crystalline solids consisting of cages of water molecules enclosing a â€˜guest moleculeâ€™. Gas hydrates offer promising solutions in areas like CO2 sequestration, desalination, gas separation, storage etc. Nucleation of hydrates has been a top challenge in this field; nucleation refers to the formation of the first â€˜stableâ€™ crystal of hydrate that can subsequently grow[1]. Subsequently, hydrates grow on the gas-liquid interface as a film [2]. The induction (wait) time for hydrates to nucleate can range from hours to days in the absence of external promotion techniques. An important recent discovery by the present group involved the use of aluminum surfaces to promote nucleation of CO2 hydrates[3]. Presently, we report that magnesium (Mg) induces nucleation of CO2 hydrates within a few minutes; this represents a >10X improvement from our previous result, with the observed reduction in nucleation time being as high as 98%, compared to [3]. Both pure Mg, as well as a common Mg alloy (AZ31) display enhanced nucleation with pure water as well as salt water. X-ray photoelectron spectroscopy (XPS) and Fourier-transform infrared spectroscopy (FT-IR) provided insights into the surface chemical changes controlling the nucleation of CO2 hydrates. Fig 1 shows the images of carbon dioxide hydrate formation using Magnesium plates.

Figure 2 shows a schematic of the experimental setup. A custom-built 450 mL, pressure vessel (Parr Inst.) with sapphire windows (for visualization) was used. Experiments were conducted in 3 ml capacity polystyrene spectrophotometric cuvettes; 4 cuvettes could be accommodated in the visualization window per experiment. The pressure vessel was located in an environmental chamber (ESPEC) to cool it. Hydrate nucleation was detected visually using a Nikon DSLR 850 fitted with a Tokina macro lens. Mirror- polished (surface roughness: 137 nm) Mg alloy (AZ31) plates (from Goodfellow), and pure Mg rods (99.9 % purity, from Sigma Aldrich) were used.

Table 1 shows the induction time in small scale polystyrene cuvette-based reactors. Both pure Mg and Mg alloy AZ31 show very effective promotion with average nucleation times around 10 minutes in deionized (DI) water. With saltwater with salinity of 35 g/L, the average nucleation time with Mg alloy is about 24 minutes which is still very favorable, compared to the two hour induction time in the absence of Mg (with saltwater). Without the presence of either Mg alloy or pure Mg, no nucleation of CO2 hydrates was observed in 15 hours.

Table 2 shows the influence of various configurations of Mg alloy plates on the nucleation of CO2 hydrates in DI water. The different configurations are depicted in Fig 3. It is clearly observed that the three-phase contact line of Mg-water-CO2 plays a critical accelerating role in nucleation of CO2 hydrates. Also, placing the Mg alloy plates close to the cuvette surface accelerates nucleation even further and average nucleation times as low as 3 minutes is observed.

Next, we studied this concept in larger reactors of stainless steel with 350 ml of deionized water. We observed instantaneous nucleation, wherein CO2 hydrates nucleated during the pressurization stage at pressures ranging between 350-400 psi. Statistical measurements of induction time resulted in a mean of 0.7 mins and standard deviation of 0.1 mins. Without the presence of Mg, CO2 hydrates nucleated with a mean induction time of 53 minutes and standard deviation of 16 mins.

XPS and FTIR analysis reveal interesting mechanistic insights related to Mg-based promotion of nucleation. Post experiments, there were two distinct regions on the Mg alloy plate, one much darker than the other. XPS characterization showed the presence of minor alloying elements such as Zn, Al in the darker region which was absent in the lighter region. FTIR analysis showed a strong chemisorption of CO2 on the surfaces of Mg during the hydrate reaction. Fig 4 shows the images of the Mg alloy plates post reaction and the results of XPS and FTIR.

Presently, we describe the significant benefits of pure Mg and Mg alloy AZ31 for promoting the nucleation of CO2 hydrates. Results from more than 80 experiments clearly demonstrate that Mg-based promotion can trigger hydrate nucleation in a few minutes, with the fastest nucleation obtained in less than a minute. Our experimental and surface characterization efforts suggest that multiple interfacial phenomena could be at play to achieve ultrafast nucleation[4]. This simple and passive technique for nucleation promotion opens up new avenues for faster hydrate formation, which is critical to realizing the benefits of hydrates in practical applications.

Research on CO2 hydrates was supported by ExxonMobil through its membership in The University of Texas at Austin Energy Institute. This acknowledgment should not be considered an endorsement of the results by ExxonMobil. V.B. acknowledges NSF-CBET grant 1653412 for partial support of this work. The authors also acknowledge the support provided by Jamie and Israel from the machine shop in the department of Mechanical Engineering. 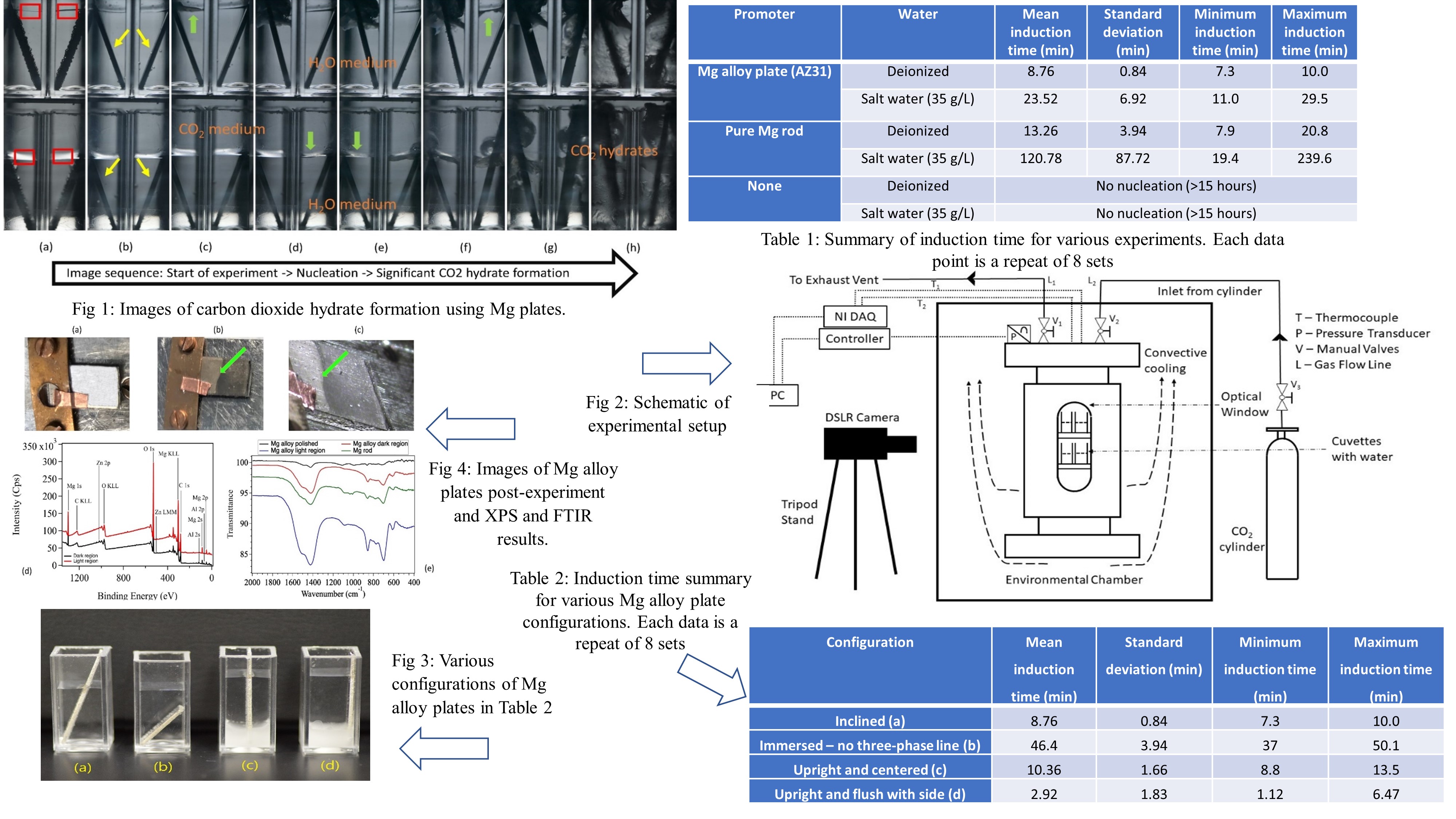