Authors:
Diwekar, U. - Presenter, Vishwamitra Research Institute /stochastic Rese
Hanumante, N., Monash University
Nisal, A.
Shastri, Y., Indian Insititute of Technology Bombay, India
Cabezas, H., University of Miskolc
Water is essential for human survival and critical for other spheres of human civilization, namely, agriculture, industrial production, and energy production. Many regions in the world are expected to face water scarcity issues in the near future. However, the water sector cannot be studied in isolation. Agriculture, responsible for food and feed production, is the largest consumer of water as compared to other anthropocentric consumption routes such as municipal, industrial, livestock, and energy [1]. Energy is an important contributor to human development and well-being, and it is also a key input to agriculture. With electricity-powered pumps, water can be drawn from deeper wells or transferred for long distances, highlighting the role of energy in improving water accessibility. However, energy production itself requires water, and some energy production technologies are highly water-intensive. Biopower and biofuels have been shown to have high water footprints [2]. Additionally, excessive water withdrawal due to cheap energy may further deplete freshwater resources. Thus, ensuring adequate water availability for everyone is a problem that cannot be addressed in isolation. Instead, it is a part of the food-energy-water (FEW) nexus.

The inter-dependencies of these three sectors are complex. Scanlon et al. [4] highlighted the criticality of understanding the FEW nexus. Several researchers have studied the FEW nexus with different objectives. For example, Dâ€™Odorico et al. [5] closely examined the individual links between food-energy, energy-water, and food-water and identified the critical areas for action. However, this study did not capture the integrated nature of the FEW nexus. The scale of the FEW nexus is also an essential factor. However, Nie et al. [6] studied the optimization problem involving the FEW nexus on a small scale. Franz et al. [7] studied the FEW nexus at the regional scale, which again represents a limited spatial scale. However, as global systems are large, inter-dimensional influences may take time to manifest. Hence, integrated cross-disciplinary models exploring the interactions between these various components has become increasingly important. Such models and their applications can improve our understanding of the complex relationships between these sectors and provide prescriptive recommendations using scenario analysis. Development of such global models began with World3 by Meadows et al. [8]. The World3 model included subsystems such as food production, industry, population, pollution, and non-renewable resources. Some of the other notable examples of global models are GUMBO [9], Earth3 [10], and HANDY [11]. More recently, our group [12] developed the generalized Global Sustainability Model (GSM). This is conceptually similar to the earlier version developed by Kotecha et al. [13]. However, we revised the model by selecting parameters as well as variable ranges based on global historical data. As compared to other global models, its ecological dimension is represented with features such as multiple trophic levels and intra-trophic level diversity. Moreover, the explicit integration between the economic and ecological dimensions is another strong point.

One key limitation of the revised model was that it did not explicitly capture water as a resource. It was assumed to be a part of the generalized resource pool. Water, though, is a crucial resource and is a part of a nexus, as highlighted previously. The critical novel contribution of this work is the incorporation of a global water network in GSM. The revised model with the water network is then used to study scenarios and policy alternatives. The analysis work tackles the following questions using the GSM: with business-as-usual conditions, can we have a sustainable water supply for all? How would the situation change if there is a population explosion? Can the improvements under Sustainable Development Goal 6 help in preventing undesirable situations?

Figure 1 shows GSM with the water network system in place. The GSM consists of three ecological trophic levels and human society. There are eight ecological compartments, human households, and their inter-dependencies give rise to a complex food web. Lotka-Volterra type equations are used to represent these relationships. The economic dimension is represented in the form of four sectors: agriculture, livestock, industry, and energy. Typically, economic state variables, prices, and production targets for the four sectors are governed by their products' inventory and the wage rate. As a price-setting mechanism is used in this model in lieu of the Computable General Equilibrium Approach, the prices are used to compute human society's demands for each industry. The supply is constrained by the raw material availability limited by the ecological dimension. This is where the interaction of ecological and economic dimensions comes into the picture.

The water system in the GSM is developed in two steps: first, the global water reservoirs and flows are established, and then, the demands by different sectors are characterized. The water reservoir represents the shared pool of global exploitable water. Inaccessible water whose utility cannot be harvested owing to technological or economic limitations or pollution is shown by the non-exploitable water reservoir. The water recycling compartment represents the mass of water undergoing water recycling. Agriculture, industrial, energy and municipal consumption of water is shown by flows to P1, IS, EE and HH compartments. In order to model the water demands, we define sectoral water intensity as the quantity of water withdrawn per unit of the desired variable. Agriculture and livestock are part of the ecological system, and, hence, would require water for their survival. Considering this constraint, P1 and H1 masses are used as shadow variables. On the other hand, the industrial and energy sectors do not need continuous replenishment of water like the ecological sectors. These sectors withdraw water during the production process only. Hence, IS and EE production terms are used as shadow variables. For municipal water withdrawal, the human population is used as a shadow variable. To summarize, P1 and H1 mass for the agricultural and livestock sector, IS and EE production for the industrial and energy sector and population for the municipal withdrawal are used as shadow variables. A sectoral intensity trend is a relationship between the historical data and corresponding shadow variable. These trends are used for projecting the future global water demands for those sectors.

The region greatly influences the demand-supply dynamics of water under consideration. To study this aspect, countries are categorized into six groups based on the continent where they are located: Africa, Asia, Europe, North America, South America, and Oceania. As exact details of water demand and supply distributions for various sectors are not available, the shadow variables approach is used to obtain the regional distribution of the water variables for each sector. The availability of exploitable water in a region is relatively stable and can be considered proportional to its area. Thus, the area of the country is considered as a shadow variable here. Again, shadow variables represent the water demand for various sectors: municipal water demand - population; agricultural water demand - area under agriculture; industrial and energy sectors - GDP (measured in international $ 2011 and adjusted for inflation). This historical country-level data is aggregated, and the contribution of each of the six regions towards the total value is computed. The approach of the piece-wise linear fit [14] is used to obtain the linear regression fits. Global and regional demand-availability dynamics, the potential adverse effect of the population explosion, and the positive influence of water resource management are analyzed.

The model was parameterized using historical data until 2013, and simulations were performed until the year 2120. Simulation results indicate that overall global water resources are adequate to meet the demands of human society. Here, the metric used to quantify the relation between water demand and availability is net water stress. It is the ratio of total water demand and exploitable water resources. This metric is more realistic as it considers the techno-socioeconomic feasibility of water utilization. Accordingly, global net water stress is close to 60%. However, deeper investigation considering distribution across various regions in the world reveals a disparity in water availability. Asia is the most water-stressed region in the world. Its water demand is expected to exceed availability by 2036. The population explosion scenario also affects water stress in the long run. For Asia, the peak water stress for the population explosion scenario increases from 109% to 124%. Water use efficiency improvement offers a way to prevent or at least delay this impending crisis. Scenario analysis indicated that at least a 30% reduction in water demand in the agricultural sector is necessary to avoid the water crisis in Asia altogether.

To summarize, the global FEW nexus's sustainability analysis identifies Asia as a flashpoint of the impending water crisis and advocates aggressive reforms in water use agricultural patterns resulting in substantial efficiency improvement to prevent the same. The model will be used to identify specific technology improvement targets and policy alternatives to ensure global water sustainability. 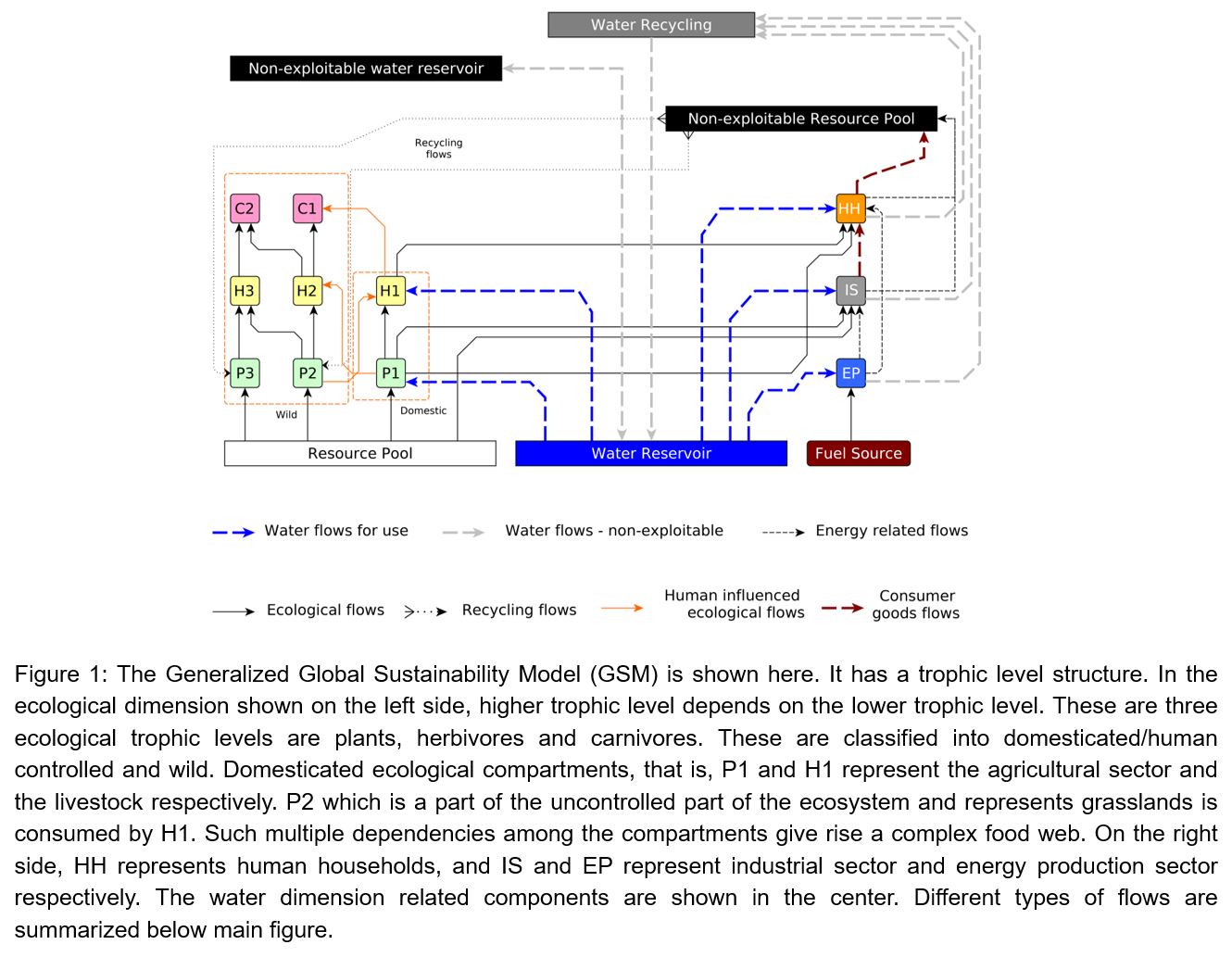