In this work, a high-pressure experimental apparatus is built to investigate the phase behavior of CH4-CO2 hydrates. The interfacial phenomenon is observed during hydrate formation and dissociation. The phase boundary of CH4-CO2 hydrates is determined by using the isochoric pressure-search method with pressure above 10 MPa. A novel theoretical model is developed to calculate the phase boundary pressure of gas hydrates by implementing a modified PR EoS for the fluid phases, the van der Waals-Platteeuw model for the hydrate phase, and the Pitzer model for the effect of ions.

It is revealed that the roughness of water-gas interface is greatly increased at the initial hydrate formation stage due to the occurrence of fine pillars at the interface, as shown in Fig. 1. Two hypotheses are proposed to explain the formation of these fine pillars, i.e., the non-equilibrium state of gas and water phases and the non-uniform lateral nucleation of hydrates at the interface. When the mass transfer rate, e.g., gas dissolution from the gas phase to water induced by the non-equilibrium condition is bypassed by the kinetic rate of hydrate nucleation, the fine pillars at the water-gas interfaces will be formed. On the other hand, if the kinetic rate of hydrate nucleation is larger than the rate of gas transfer and, in the meanwhile, the driving force for gas transfer is not high enough to overcome the restraint of the hydrate film, the fine pillars also will be formed at the surface of the gas bubble. The roughness of the water-gas interface decreases as time goes by during hydrate formation owing to the thickness growth of the hydrate film. The deviation of the calculated phase boundary pressure from the 86 collected experimental data points of CH4-CO2 gas hydrates formed in pure water is 3.7%, and that of the 24 collected phase boundary data points of CH4-CO2 gas hydrates formed in NaCl solutions is 5.3%, which proves the reliability of the newly developed model. The measured phase boundary data points of CH4-CO2 gas hydrates formed in NaCl solutions in this work extend the phase boundary pressure up to 61.99 MPa and the temperature to 295.09 K, which have filled the blank of the database in the high-pressure and high-temperature region, as illustrated in Fig. 2. It is found that when the pressure is above the upper quadruple point of the CH4-CO2 gas mixture, the phase boundary pressure is higher for mixture with a larger concentration of CO2. The deviations of the calculated phase boundary pressure from these two groups of measured ones are 8.9% and 6.2% respectively. These data points are important for the study of interactions between water, gas, and ions at the high-pressure and high-temperature conditions. 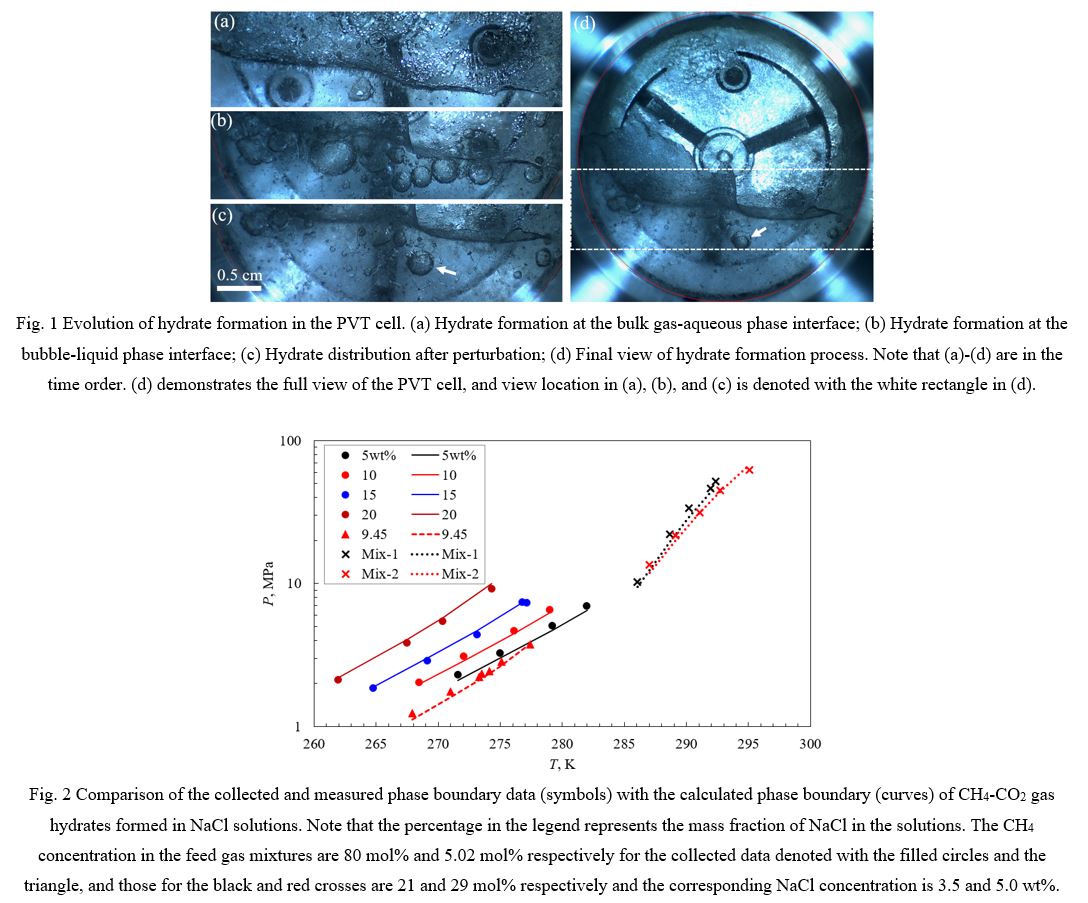