Authors:
Diwekar, U. - Presenter, Vishwamitra Research Institute /stochastic Rese
Nisal, A.
Hanumante, N., Monash University
Shastri, Y., Indian Insititute of Technology Bombay, India
Cabezas, H., University of Miskolc
Boman, R., Affordable Futures
At its core, the concept of sustainability is about ensuring that the conditions necessary for civilized human existence on Earth are maintained over the long term, or for as long as possible [1-6]. Successful implementation of sustainability ideas in food-energy-water (FEW) systems requires a basic understanding of the often nonlinear and non-intuitive relationships among different dimensions of the network [7], particularly the system-wide implications of human actions [8-11]. This basic understanding further includes a sense of the time scale of possible future events and the limits of what is and is not likely to be possible. In this work, we present an integrated model that has different components like food-web ecosystem dynamics, microeconomics components, including energy producers and industries, and various socio-techno-economic policy dimensions.

Mathematical models featuring the critical components of a real ecosystem can aid in the formal study of sustainability. For instance, ecologists have used mathematical models to determine the stability of a community based on the size and connectivity of the food web in the face of fluctuations of the system . Lotka-Volterra models used to describe the predator-prey interactions represent one classical theory used to study the dynamics of these biological systems. Also, there have been ecological models that have incorporated varying degrees of socio-economic features. Acutt and Mason [12] and Heal [13] proposed valuing the various environmental services in an ecosystem in their decision-making models. Some of the other works which included primarily simplified economic features in their ecological models are the ones developed by [15-17]. The first such comprehensive model is the model from the Club of Rome [9, 10]. This model has components like the human population, natural resources, pollution, industrial production, and agricultural land use. The results of this model established growth patterns and limits for the first time. Models accounting for processes such as resource extraction, waste assimilation, recycling, and pollution in an integrated ecological, economic framework have also been proposed in the literature [18]. In recent years, united global metamodel of the biosphere (GUMBO) [11] was developed to include dynamic feedbacks among human technology, economic production and welfare, and ecosystem goods and services. Recently, the model predictions were compared with data from 2000-2018 [12]. Whitmore et al. [19] have proposed a model that integrated an economy under imperfect competition with a widely used twelve-cell ecological model [3]. This twelve-cell ecological model developed by Cabezas et al. [3] mimics a global ecosystem with a very rudimentary social system that regulates the flows of mass according to its criteria and is the first model we have developed. The intermediate model includes the industrial sector and the rudimentary economic system [3]. The third more comprehensive and recent model is an integrated model, including ecology, economics, social system, technology, and time [20]. The food-web is modeled by Lotkaâ€“Volterra type expressions, whereas the economy is represented by a price-setting model wherein firms and the human households attempt to maximize their well-being. In this work, we combine the food-web model with a microeconomics model similar to Kotecha et al. [20]. Although our global model is conceptually similar to the World and GUMBO model and includes additional information like land use, water capacity, and pollution, our focus is on food-energy-water nexus, unlike existing global sustainability models. The microeconomic model is augmented by a reinforced learning (RL) based model based on time series data.

A schematic of the food-web model we have developed is shown in Figure 1. The model consists of 15 compartments and represents a simplified ecological food web set in a macroeconomic framework along with a rudimentary legal system. The model consists of three primary producers (P1, P2, and P3), three herbivores (H1, H2, and H3), two carnivores (C1 and C2) along with human households (HH). The Energy source (ES) represents a finite nonrenewable energy source. The Inaccessible Resource Pool (IRP) results from waste flows from the ES and IS that are not biologically accessible to the ecosystem. Primary producers P2 and P3 feed on IRP and make this mass available to the rest of the ecosystem but at a slow rate symbolizing bacterial actions, while other ecological processes absorb other wastes such as CO2. As a stock of pollutants, the IRP degrades the ecological fund. All biological compartments recycle mass back to RP through death. The Energy Producer (EP) is an industrial compartment that uses labor to transform the energy source into a usable form of energy. This energy is supplied to the human households (HH) and the Industrial sector (IS). The Energy Producer is also capable of producing energy using P1, representing the production of energy using biomass. The Industrial Sector (IS) produces products valuable to HH using P1 and RP. The use of the IS products does not increase the mass of the human households, but it does raise the mass of IRP. The biological compartments of the systems can be aggregated as shown in the figure into domesticated species with economic value and wild species with no economic value. A legal system assigns property rights to domesticated biological species, the product of the industrial sector, and the non-renewable energy source.

The model construction and validation are carried out using global-scale data for stocks and flows of food, energy, and water, which can be used to parameterize this model. We have also collected data (e.g., pollution, land utilization, etc.) from the World3 and GUMBO model as these models are validated for past data. We will use past data to generate the parameters of this lumped compartmental model. The last ten years of data for key variables like the human population, GDP growth, global warming trends, and land use are used to validate the model.

The model will then use to conduct different scenario analyses forecasting the sustainability of the planet for the next century or more. In particular, we will look at the following aspects:

The results will provide policy guidelines and recommendations for ensuring long term sustainability. 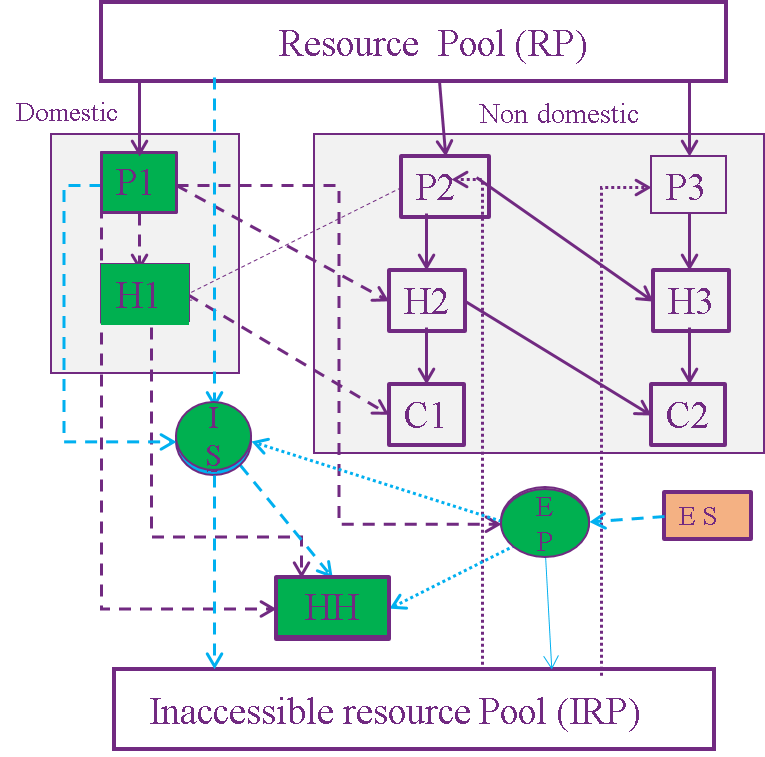