Our new learning platform is now LIVE! You may now access your courses at learn.aiche.org

The search for new active pharmaceutical ingredients (API) has gone through an important development over the last few decades. Especially by using technologies like high throughput screening and combinatorial chemistry, improving solubility and thereby oral bioavailability of drugs in development has become a main challenge for pharmaceutical development [1]. About 40 % of the drugs in the market are considered to be poorly soluble, but regarding the substances in development, the percentage of BCS class II and IV drugs is expected to be much higher [2]. Therefore it is necessary to develop new formulation techniques to enhance solubility and thereby bioavailability of these drug substances.

In this work submicron API particles are produced with ultrasonic atomization technique in a specially designed aerosol generator. As nanoparticular aerosols create a hazard to the environment, and frequently show reduced wettability, the generated particles are charged and deflected into a carrier melt in the melt electrostatic precipitator (MESP) [3]. Thereby the hazardous material is handed safely on the one hand. On the other hand the drug particles are embedded in a water soluble carrier and show an enhanced dissolution in water. The concept of the MESP and first experiments have already been discussed in previous work [3]. The aim of the present work is to characterize the MESP with a new designed aerosol generator in order to obtain a product with a higher drug load than it has been achieved before with a spray drying plant with aerosol conditioning [4].

The drug load in the xylitol melt was analyzed. The chilled and recrystallized melt was dissolved in a mixture of water and isopropyl alcohol (1:1). The phenytoin content was measured with UV-Vis (Jenway 7305, Stone, UK) at a wavelength of 212 nm. The loading time was kept constant at 5 min, while the applied voltage was varied above the corona inception voltage and below the corona breakdown voltage.

Dissolution experiments were conducted in United States Pharmacopeia (USP) Apparatus 2 (DT 6, Erweka, Heusenstamm, Germany) in demineralized water of 37 °C at a stirrer speed of 50 rpm. The drug-laden xylitol was crushed and sieved with a mesh size of 400 µm. For comparison a physical mixture of xylitol and phenytoin was prepared using a turbula mixer (Turbula T10B, W.A. Bachofen AG, Muttenz, Switzerland).

A spray drying plant for the production of submicron particles and the use of organic solvents was designed. A piezo crystal (WHQ 3005/1530-12N, Siansonic Technology, Bejing, China) operating at a high frequency of 3 MHz, was used to produce an aerosol of small, uniform droplets. The drug solution was pumped constantly out of a feed tank into the aerosol chamber in order to cover the piezo ceramic. The liquid level was kept constant throughout the nebulization process. To separate larger droplets out by a vortex and to transport small, gas-borne droplets upwards, carbon dioxide was let in tangentially. A particularly low volume flow was chosen, as the droplet size is independent of the volume flow, but increases the separation efficiency in the melt electrostatic precipitator (MESP). The droplets were transported upwards through a dip pipe into a drying stage, where the solvent was evaporated and removed from the aerosol by condensation. The particles were collected on a glass surface for investigation in scanning electron microscope (SEM) (Figure 1).

The spray dried API particles were characterized by scanning electron microscope (SEM) and laser diffraction measurement. One representative SEM picture is shown in Figure 2. The particles are rectangular or rhombic shaped and thereby indicate a crystalline state [5,6] (Figure 2a). Laser Diffraction measurements were conducted in three measurements and no relevant differences were seen. The particle size distribution is narrow, with a d50 of 300 nm (Figure 2b).

The drug load increased with increasing applied voltage hence the particles are charged more and can be separated more efficiently [7]. The drug load could be increased 25 times compared to a previous study [3] (Figure 3). The volume flow of the transporting gas was set at 3.6 L/h compared to 120 L/h. This led to a longer residence time of the particles in the loading area of the MESP and thereby to more efficient precipitation. The aim to increase the drug load could be achieved by the introduction of a new spray drying plant. Nevertheless the drug load is still rather low. During the process a particle layer on the inner walls of the MESP was built up. It can be explained by the phenomenon of back corona. Therefore, an optimization of the MESP is required.

In this study a spray drying plant for the production of submicron particles was built and tested. The design was adapted to the requirements of a combined use with a previously designed Melt Electrostatic Precipitator. The gas volume flow could be set as low as it was needed for an efficient electrostatic separation without influencing the small size of the generated droplets. With this adaption of the spray drying section the aim to obtain higher drug loads in the product was achieved.

The in vitro dissolution behavior was improved, nevertheless an influence of the drug load was observed. An agglomeration tendency with increasing drug load is assumed. Thereby further improvements concerning the MESP design are required in order to reduce particle agglomeration during the process.

The authors thank Volker Brandt (TU Dortmund University) for taking the SEM pictures and are grateful for the material support from Roquette Pharma. 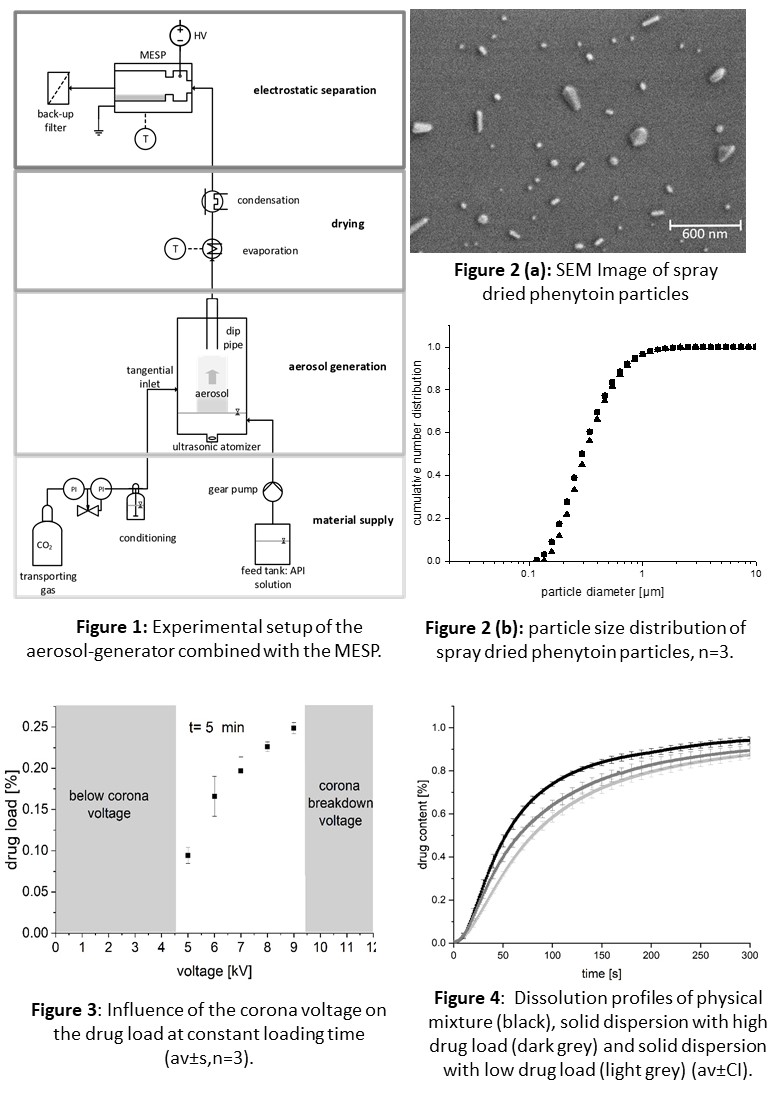