In this work, we have developed a method of concentrating the nanoparticles prior to spray drying by taking advantage of their anionic surface chemistry. The particles are stabilized by a layer of hydroxypropyl methylcellulose acetate succinate (HPMCAS), an amphiphilic anionic polymer commonly used as a pharmaceutical excipient. When acid is added to the nanoparticle suspension and the pH dropped to 2, the succinyl groups on HPMCAS are protonated; the electrostatic repulsion between particles that provides colloidal stability is mitigated; and the particles flocculate. We find that the flocculation is reversible; that is, subsequently increasing the systemâ€™s pH results regenerates the original nanoparticles. The floccs may be easily separated from the bulk, redispersed at a significantly higher solids concentration, and then further processed.

The governing rules for nanoparticle flocculation, solids recovery, and redispersion are explored. We demonstrate the effects that major process variables such as pH and organic solvent content have on the particle flocculation and re-dispersion events, particularly settling time and extent of flocculation. A series of fluorescent nanoparticles are prepared and the flocculation and redispersion events are imaged in real time using confocal microscopy to quantify settling time, flocc size, and flocc fractal dimension as a function of the variables above. We demonstrate that when most of the residual organic solvent is removed, the flocculation follows diffusion-limited aggregation and the fractal dimension of the resulting floccs falls within predicted limits. This technique, which takes advantage of the ionomer nanoparticle coating and its sensitivity to pH, is an important step in improving nanoparticle processing at scale and translating our combined particle formulation and drying process to the industrial scale. 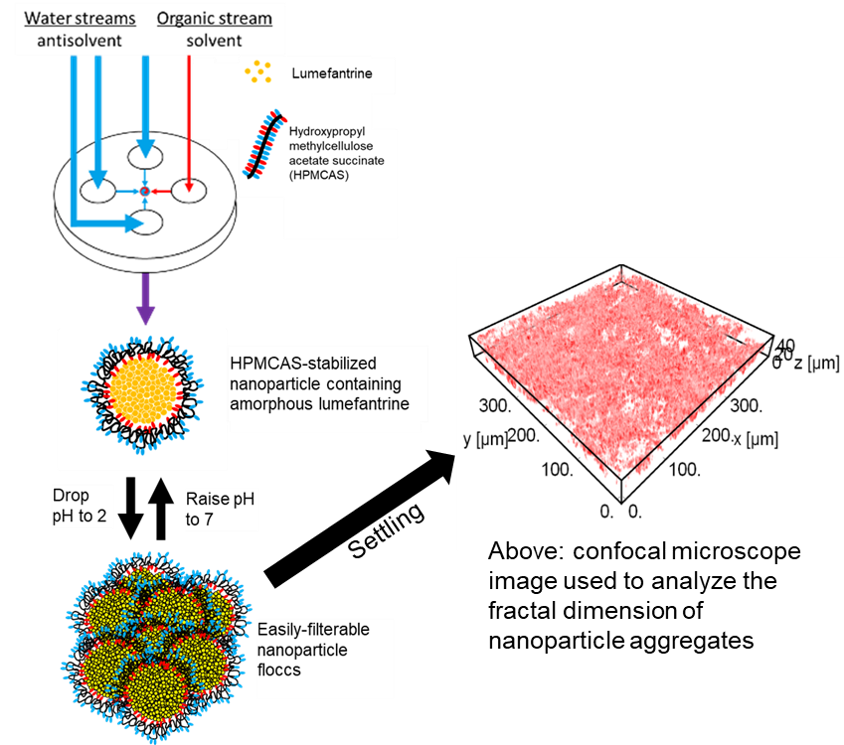