Authors:
Romano, M., University of Birmingham
Simmons, M., University of Birmingham
Alberini, F., University of Birmingham
Stitt, E. H., Johnson Matthey
Liu, L., Johnson Matthey Technology Centre
Mixing of liquids in agitated vessels is one of the most common and yet complex operations in the process industry(1). It is influenced by numerous factors, including the rheology of the fluid. Flow measurements are crucial for a better understanding of the mixing phenomena, predictive purposes and the design, optimisation and scale-up of the equipment(1, 2, 3). 3D Particle Tracking Velocimetry (3D-PTV) is a flow visualization technique based on the individual tracking of tracers within the flow, enabling all the three dimensions of the Lagrangian velocity field to be obtained. The use of relatively large tracers (200 â€“ 1000 Âµm) eliminates the need for expensive laser illumination. Single-camera setups can cut the costs even further(4), at the expense of a reduction in spatial resolution and accuracy. For these two reasons, 3D-PTV is becoming an attractive alternative to the traditional laser-based velocimetry techniques, such as Particle Image Velocimetry (PIV) and Laser Doppler Anemometry (LDA). However, there is still a lack of research where 3D-PTV is applied to mixing in stirred vessels(4). This is because the volumes and the large range of velocities involved represent a big challenge.

Synchronous image sequences of the flow at 1,024×1,024 pixel resolution were recorded from two viewing orientations, using a high-speed camera and a mirror arrangement. The data processing involved the following steps:

The figures below show the case of a Herschel-Bulkley fluid (Carbopol 940 solution in water, 0.2% wt) agitated at 400rpm. Extending Metzner-Ottoâ€™s concept(5) to the low transitional regime, the Reynolds number was about 20. As a result of the yield stress, the fluid formed a cavern around the impeller (Figure 1). The cavern was successfully captured by PTV measurements (Figure 2).

Figure 1: Extension of the cavern formed by a Herschel-Bulkley fluid agitated at 400 rpm, visualized by injection of a dye. 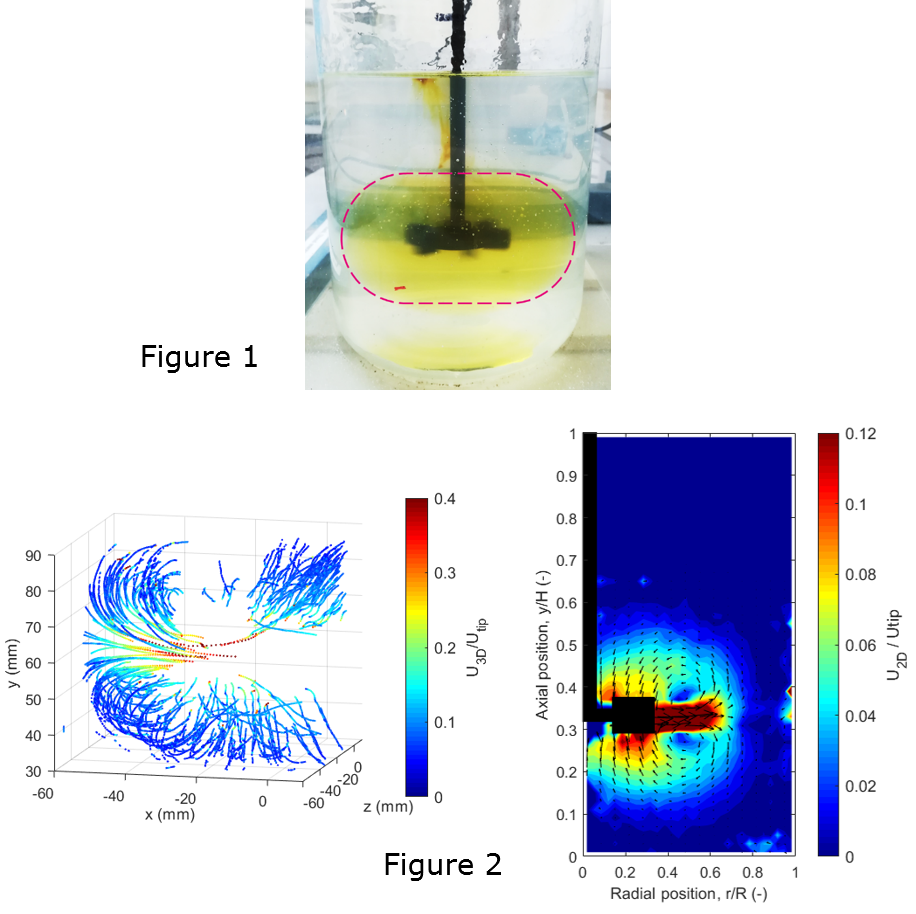