(192d) Optimization and Modeling of Methane Oxidation on Four-Way Catalysts

Authors:
Karinshak, K. - Presenter, University of Houston
Chen, P. W., University of Houston
Liu, R. F., CDTi Advanced Materials Inc
Grabow, L. C., University of Houston
Harold, M., University of Houston
Introduction: Cars and trucks accounted for nearly 25% of all greenhouse emissions in the US in 2016 [1]. Natural gas vehicles (NGVs) are a promising greener alternative; natural gas has a more favorable C:H ratio than diesel or gasoline. However, uncombusted methane â€“ produced in non-negligible amounts by NGVs â€“ presents a serious problem; methane has a Global Warming Potential twenty-times that of carbon dioxide [2]. Until recently, methane has been a non-regulated exhaust component and current emission control catalysts such as the Three-Way Catalyst (TWC), while effective for CO, NOx, and non-methane hydrocarbons, are ineffective for methane oxidation.

To this end, current work in our group is focused on the development of the Four-Way Catalyst (FWC) to additionally target methane in addition to CO, NOx and other hydrocarbons. Current TWCs modified to catalyze methane oxidation require high loadings of precious group metals (PGM; Pt, Pd, Rh). There is a need to develop FWCs with lower PGM loading while achieving effective methane oxidation activity. We are examining a class of FWCs that contain transition metal oxides with spinel structure, AB2O4, that exhibit enhanced CH4 oxidation and NO reduction under modulated feed conditions.

Results and Discussion: In our previous publication, we demonstrated that the presence of spinel improves CH4 oxidation temperatures under modulating conditions; shifting the T50 (temperature where X = 50%) by 45 °C when compared to the PGM-only sample. We also showed that catalyst performance was highly dependent upon the ratio of oxidants to reactants, that slightly rich feeds were optimal, and that modulation shifts the point of maximum conversion closer to higher O2 concentrations (Fig. 1-A) [3]. Since that publication, we have continued to examine the underlying mechanism behind the feed modulation enhancement for understanding and further optimization. In this presentation, we evaluate how spinel composition, catalyst pretreatment, and operating conditions impact methane oxidation performance of Four-Way Catalysts.

While previous research has demonstrated that spinel composition can play an important role in CH4 oxidation [4], how the spinel coupling with the PGM has not been elucidated. Our current light-off experiments under slightly rich, near-stoichiometric feed conditions show that spinel can significantly affect CH4 conversion. All catalysts are dual-layer samples, possessing a washcoat of 10% spinel (90% Al2O3) and an overcoat of PGM on Al2O3 (30 g/ft3, 95:5 ratio of Pt to Pd). Experiments occur under a 10 °C/min ramp with a 42k hr-1 space velocity. Under time-invariant feed conditions, all PGM-spinel samples have superior light-off temperatures compared to the PGM-only sample, though all but one ultimately had worse high temperature performance. That sample, the PGM-NiCo2O4 reached full conversion at 400 °C and maintained that performance until the end of the light-off ramp at 525 °C. Every sample experienced deactivation under steady-state conditions at the conclusion of the temperature ramp; we attributed this to coking as a result of the slightly rich conditions. Under modulated feed conditions, the MnCo2O4 and CoMn2O4 spinel samples had the best T50, and high-temperature deactivation was not observed.

Ongoing experiments comparing catalyst performance under typical TWC and NGV operating conditions, generally leaner with higher CH4 and H2O content, suggest that FWCs are less effective under these more demanding feed conditions. For example, the PGM-NiCo2O4 catalyst had a T50 120 Â°C higher with the modulated feed. Experiments are ongoing to determine if different spinels possess greater resistance to these difficult conditions, and how modulation parameters â€“ average feed lambda, oscillation amplitude, and oscillation frequency â€“ impact catalyst activity under these new feed conditions. Through these experiments, we will gain identify the optimal PGM-Spinel catalyst composition and gain further insights into the mechanism by which Spinels impact catalytic activity.

Methane oxidation kinetic experiments reveal that the rate is strongly inhibited by O2 near the stoichiometric point (Fig. 1-B). These kinetic experiments are carried out in a 0.5â€ by 0.5â€, 600 cpsi monolith at a space velocity of 112.5k hr-1. Experiments sweep O2 from 500 ppm to 6000 ppm. By varying the CH4 concentration, it is shown that the rate is highly dependent upon the SN, O2/CH4 ratio. CO2 was shown to be the predominant product, even at very low concentrations of O2. To determine rate order and activation energies of the CH4 oxidation reaction, conversion was kept under 15%. Experiments are ongoing to determine rate parameters at even lower SN values. The results of these experiments will feed into the development of a low-dimensional kinetic model of the system that can successfully predict catalyst behavior under time-invariant and modulation feed conditions. 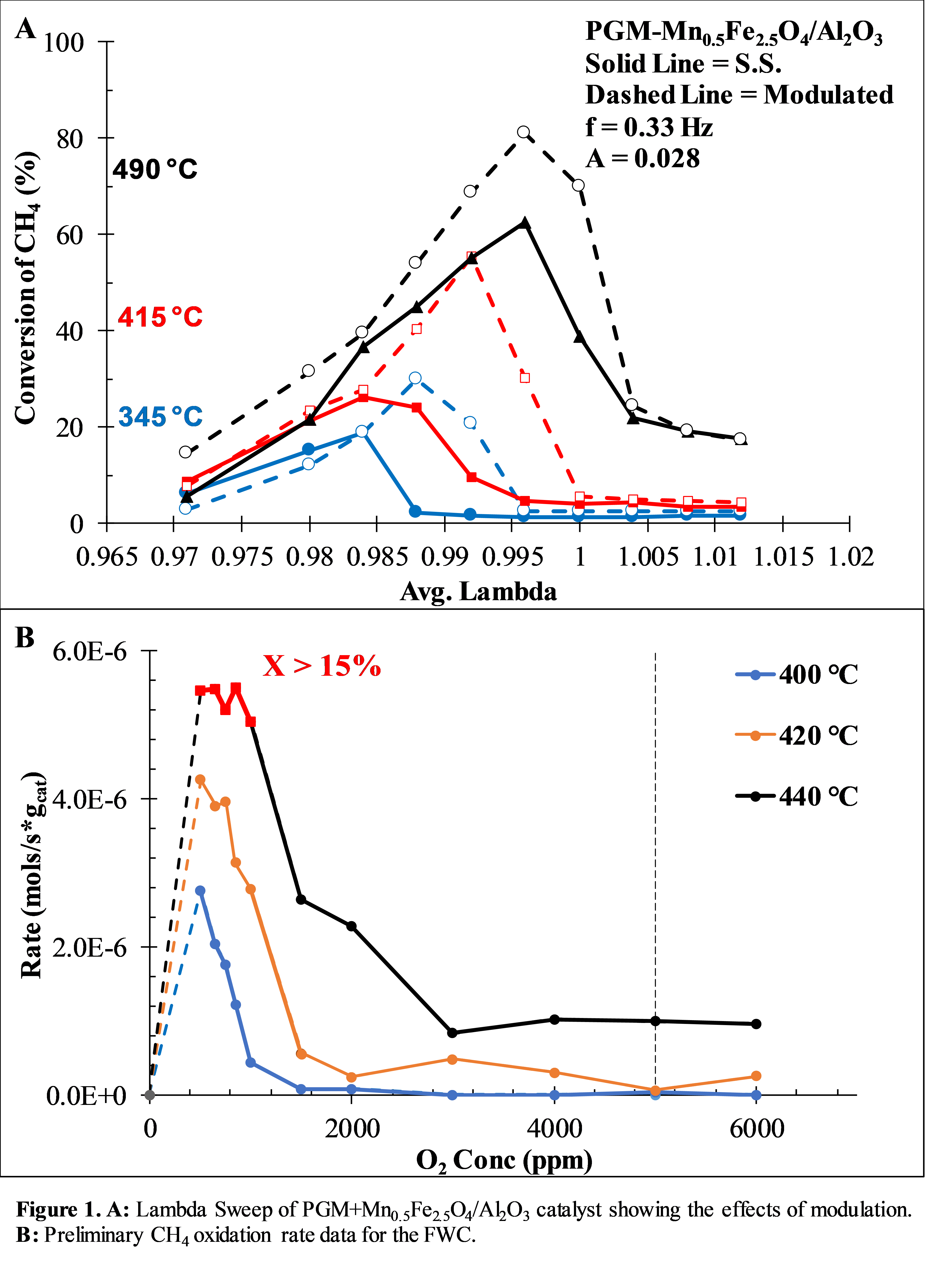