Authors:
Vollmer, I., Delft University of Technology
Weckhuysen, B. M., Utrecht University
Jenks, M., Utrecht University
Thermal cracking, a way to recycle widely used polymers like polyolefins, is a rather unselective.[1] Catalyst use however is inefficient because polymers cannot enter the pores of typical catalysts with their length being on the order of the diameter of for example a fluid catalytic cracking (FCC) catalyst particle (50 to 150 µm). To be able to design a suitable catalyst material that can be used more efficiently, the interaction of the polymer with fresh FCC catalyst, equilibrium catalyst and zeolite Y is studied using confocal fluorescence microscopy (CFM) and the results are compared with selectivities and product evolution profiles obtained from catalytic testing.

FCC catalysts are crucial for the refining industry and have been found to effectively speed up the cracking of polyolefins, forming more valuable short-chain hydrocarbons.[2,3] The catalyst contains active alumina components as well as ultrastable zeolite Y (USY). During the FCC process in the refinery, deactivation occurs due the heavy elements contained in the crude oil feedstock. The deactivation by Fe, Ni, V, Na and Ca is irreversible making these equilibrium catalysts a waste product.[4] These elements however are beneficial for catalytic cracking of waste polyolefins.

In our work we found that he fraction of gaseous products below C6 increases markedly (Figure 1, top) with an equilibrium FCC catalyst compared to noncatalytic cracking, fresh FCC catalyst and zeolite Y (Figure 1, bottom right). This leads to the formation of the monomer and more olefinic C4 and C5 fractions, while decreasing the amount of produced coke. Increased aromatics and coke production concurrent with increased production of paraffins is observed over fresh FCC catalyst and zeolite Y.

How effectively the catalystâ€™s active sites on the internal and external surface area and the zeolite components deeply embedded in the FCC matrix are used for cracking has been investigated with CFM at various stages of the reaction. To study the degree of penetration of the uncracked polymer, the catalyst particles are impregnated with fluorescent polymers. Upon heating, thermal cracking occurs in the surrounding of the catalyst particles and on its external surface resulting in products small enough to diffuse into the pores of the catalyst. To understand the contribution of the external surface area, the mesopores in the alumina matrix and the zeolite components, the initial cracking steps are studied separately on a FCC matrix catalyst containing no active zeolite Y components and no porosity. The initial cracking products further crack, isomerize and cyclize leading to the formation of final products as well as carbonaceous deposits, which are again visualized with CFM at various stages of the reaction (Figure 1, bottom left) inside the FCC catalyst. The nature of the carbonaceous deposits has further been characterized using solvent extraction techniques combined with 2D GCMS and thermogravimetric analysis. Nitrogen physisorption is used to elucidate the rate of pore blockage due to coking. 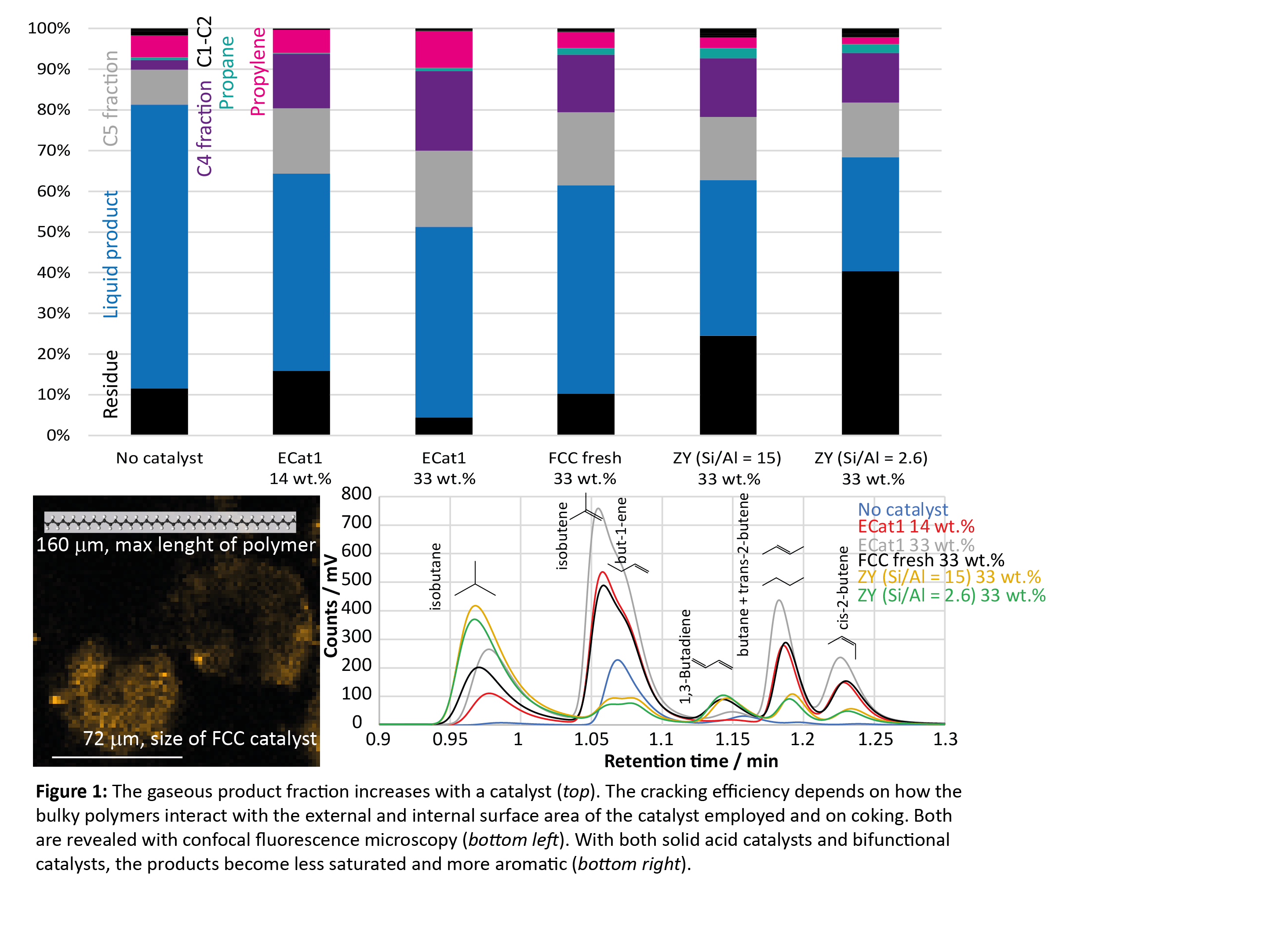